How to Restore Uganda’s Fading Halo

The country’s record of successful development is threatened by endemic corruption and growing worries about the political future. 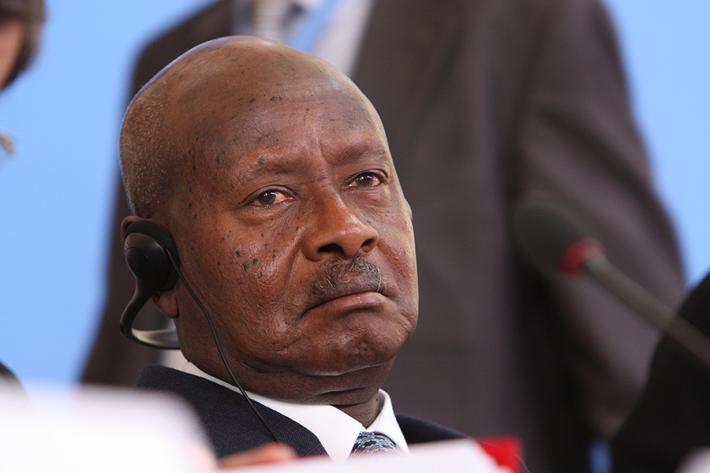 by Donald Rukare, Chief of Party, Rights and Rule of Law Activity, Uganda

The country’s record of successful development is threatened by endemic corruption and growing worries about the political future.

Thirty years ago, Uganda emerged from a dark period of repression under Idi Amin and Milton Obote, an era characterized by the stark absence of the rule of law, government by military decree, and an economy in free fall. In 1986, with popular support, the new regime headed by Yoweri Museveni embarked on an ambitious reconstruction of the broken country. Museveni is vividly remembered for stating that the new administration was not a mere changing of the guard, but a fundamental change in the governance of Uganda.

There is no doubt that over the last 30 years, in many respects, Uganda has turned around. A new, more democratic constitution was adopted in 1995, the economy has been relatively stable, peace generally obtains across the country due to the end of a long-standing civil war in Northern Uganda, and HIV/AIDS—a devastating scourge in the early 1990s—has to a large extent been contained thanks to a robust response by the government. For example, estimated AIDS-related deaths fell to about 31,000 in 2014, compared with 67,000 in 2010.

The introduction of free universal primary education in 1996 was seen as a game changer, as were important investments in roadbuilding and the energy sector. Enrollment rates in primary school rose from 3.1 million pupils in 1996 to 8.4 million in 2013, and by the end of 2016 the tarmac road network is expected to reach 5,000 km, with the goal of tarmacking an additional 2,000 km of gravel roads over the next five years.

The discovery of oil and gas reserves over the past decade excited the nation, with projections that it could help transform Uganda into a middle-income country. Development partners and donors warmed up to the Museveni regime, and Uganda became an influential player at the continental level, notably in the East and the Horn of Africa. Museveni gained respect in the region for his critical role in maintaining stability.

For a time, Uganda was a glowing beacon of success in Africa, and its halo seemed to brighten every day. However, over the last few years, the halo has been rapidly fading for a number of reasons.

Corruption may be the Achilles’ heel of today’s Uganda. It is embedded in the rank and file of the public administration, significantly affecting service delivery across all sectors. Recent mind-boggling revelations of gross theft in the road sector, with an estimated 4 trillion shillings ($1.2 billion) misappropriated over several years, illustrate the problem. The country has yet to recover from a decade-old scandal involving the diversion of about 124.8 billion shillings ($37 million) from the Global Fund to Fight AIDS, Tuberculosis, and Malaria, and an audit report earlier this year revealed another apparent plunder of some 13.1 billion shillings ($3.9 million) from the fund.

The country is sinking under the unbearable weight of a huge and expensive government sector. We have 112 districts, 458 members of parliament, 80 ministers, and about 100 presidential advisers. While this largesse may be politically expedient for the regime, the toll on the national budget is unstainable. Efficiency is especially important given Uganda’s rapidly growing population, now at more than 40 million. Nearly half of the population is under 15 years old, and the annual growth rate is 3.4 percent.

The governance question is currently dominating national public debate. Museveni was inaugurated for a new term on May 12, marking 30 years at the helm of the country with no discernable transition plan. There is a growing sense of weary resignation among large sections of the population regarding Uganda’s downward governance trajectory. The opposition has largely been muzzled by the state through intense intimidation and harassment. Kizza Besigye, the main opposition leader, has spent the last few years in and out of court or jail, or kept in preventive detention at his home. He is currently facing treason charges. Several development partners are scaling down their support to the government, with some opting to revert back to direct funding of specific projects.

A new deal for Uganda

It is clear that the new administration has its work cut out for it over the next five years. The situation calls for a new deal in which corruption is resolutely fought at all levels. The government should focus on the prosecution of those involved in high-level corruption and seize the assets of the implicated individuals. For its part, civil society needs to be more vocal and visible in demanding a stronger governmental response in the fight against corruption.

In addition, a true and demonstrable commitment to effective service delivery should be the calling card of the new government. Increased budget allocations to education, health, roads, and agriculture, coupled with an emphasis on effectiveness and efficiently in these sectors, are required. It is critical that the citizenry be put at the center of the national agenda. We deserve better. The political commitment to family planning should also be enhanced to ensure that Uganda is on a path to experience a demographic dividend in the next 20 years. A policy encouraging family sizes of no more than three to four children per household would be welcome.

However, the governance question is the elephant in the room, and it needs to be tackled in an open and frank manner. The leadership should initiate a national conversation that includes  all stakeholders in order to chart the way forward for the country. At present there is a great deal of foreboding and uncertainty about the political future, and a real need to begin mending the fractured society after the recent elections. The ruling National Resistance Movement will have to extend an olive branch to the opposition.

To correct the nation’s course and restore its reputation as a success story for the region, it is incumbent upon us all to ensure that constitutionalism, the rule of law, and respect for human rights becomes engrained in the national governance landscape.