Human Rights in a Post-FARC Colombia

The end of the left-wing insurgency could deprive other violent actors of cover and impunity for their attacks on human rights activists. 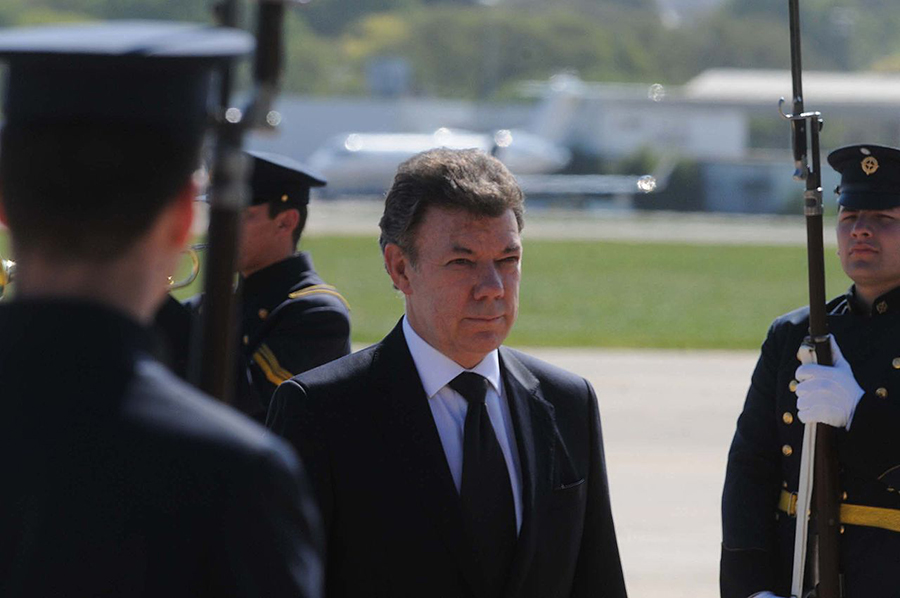 The end of the left-wing insurgency could deprive other violent actors of cover and impunity for their attacks on human rights activists.

On December 10, President Juan Manuel Santos collected his Nobel Peace Prize in Oslo, awarded for his efforts to broker peace between the Colombian government and the Revolutionary Armed Forces of Colombia (FARC), a left-wing guerrilla group. The peace deal, signed and ratified by Colombia’s Congress late last month, formally ended more than 50 years of conflict with the FARC, but there is a long way to go before peace and the rule of law prevail throughout the country.

Battle-related deaths have been falling since 2005, according to the World Bank, and the agreement between the government and the FARC will surely decrease them further. The termination of an insurgency that has claimed as many as 220,000 lives is a crucial step forward, but it leaves many problems unaddressed, especially with respect to human rights.

The chaos associated with the FARC insurgency over the last half-century created ample space for other illegal armed groups to operate. In particular, militant bands comprising former right-wing paramilitary fighters have continued the brutal practices espoused by their predecessor organizations, which were formally demobilized from 2003 to 2006. The cover provided by Colombia’s internal conflict has made it easy for powerful interests to use extrajudicial violence to rid themselves of inconveniences: The “neo-paramilitary” groups often work on behalf of or in collaboration with private businesses and political officials.

The frequency and multipolar nature of violence in the country erodes accountability, leaving those who stand up for the rights of vulnerable populations at disproportionate risk. For activists, the FARC and other leftist guerrilla groups represent a very small part of the danger they face in the course of their work. A recent Freedom House study of threatened human rights activists highlighted the role played by other actors in undermining human rights and the rule of law in Colombia, suggesting that the problem will persist even after peace with the FARC.

Freedom House’s analysis examined 67 cases from 12 departments in Colombia in which activists came under grave threat as a result of their human rights work between 2009 and 2016.

In over half of the cases studied, 55 percent, the subjects were threatened by neo-paramilitary groups like Aguilas Negras and Los Urabeños. Such groups often equate human rights activism with support for guerrillas. In other instances they simply find human rights work to be problematic for their own operations and seek to resolve the situation with violence.

Though they have been illegal since 2006, neo-paramilitaries and subsidiary illegal armed bands have been widely implicated in dealings with government officials and private companies. According to the information provided to Freedom House by the studied victims, in about one in four of the cases involving neo-paramilitaries, the orders originated with local state actors.

Overall, Freedom House found that one-third of the human rights activists studied faced threats that involved local or national government actors. Some government threats were motivated by simple corruption and greed, as was the case with a governor whose campaign was allegedly financed by a narcotics trafficker. More commonly, however, the threats stemmed from the blurred lines that ongoing internal conflict has created for many Colombians. Any purported association with the guerrillas can mean jail time, even when the evidence comes from anonymous testimony. If formal charges are dropped, the defendant can still face a de facto death sentence carried out by paramilitary or neo-paramilitary fighters.

The general impunity for such extralegal killings allows private interests, especially in rural areas, to invoke the leftist guerrilla bogeyman to justify their own attacks on activists, which are outsourced to the same illegal militias. More than 40 percent of the victims studied faced threats as a result of businesses prioritizing profit over the rights of the surrounding communities, or government officials prioritizing investment over the rights of ordinary citizens.

One activist working to help people who were forcibly displaced by a mining company received continuous threats from neo-paramilitary fighters allegedly paid by the company. The National Protection Unit (UNP), created by the Colombian government specifically to counter the daunting volume of threats against individuals, assessed the activist’s situation and dispatched a bodyguard to keep him safe. However, immediately after he coordinated with a miners’ union to petition the local government for assistance, the UNP informed the activist that his protection would be withdrawn due to a shortage of funding.

Another activist working on the right of internally displaced persons to return to their land was arrested in 2013. He was simultaneously charged with being a member of the left-wing FARC and with being paid by a right-wing paramilitary group—paradoxical allegations that were dismissed by multiple international organizations and a UN agency. Nonetheless, he remained in prison in 2016.

The FARC as scapegoat

Human rights activists in Colombia have been caught between private businesses, government officials, left-wing guerrilla groups, and right-wing neo-paramilitaries as they compete for influence and resources.

This grim pattern might be interrupted by the peace agreement. While other prominent players remain at large, the demobilization and reintegration into society of the country’s biggest rebel group will undoubtedly change the game. Without the FARC to serve as a scapegoat, the government, businesses, and society at large will have to face greater accountability.

The new peace is off to a rocky start: Even with the sharp drop in FARC activity, violence and threats against human rights activists has been increasing in recent months, in an apparent backlash against the agreement that the Santos administration is driving forward.

The president’s Peace Prize marks the successful adoption of a legal document. But Colombia remains far from peace in practice. The country must now undertake the slow, frustrating process of extracting the conflict’s poison from society. Although reconstructing the nation’s respect for the rule of law and human rights will be a monumental task, it will be easier without the FARC looming on the horizon.