Imprisoned, but Not Forgotten: Rights Abuses and the Global Events that Hide Them

Political prisoners and the victims of human rights abuses have taken a back seat when global summits and events occur. But it is exactly because of those events that we should be giving the victims of such abuses our full attention.

Director of the Political Prisoners Initiative 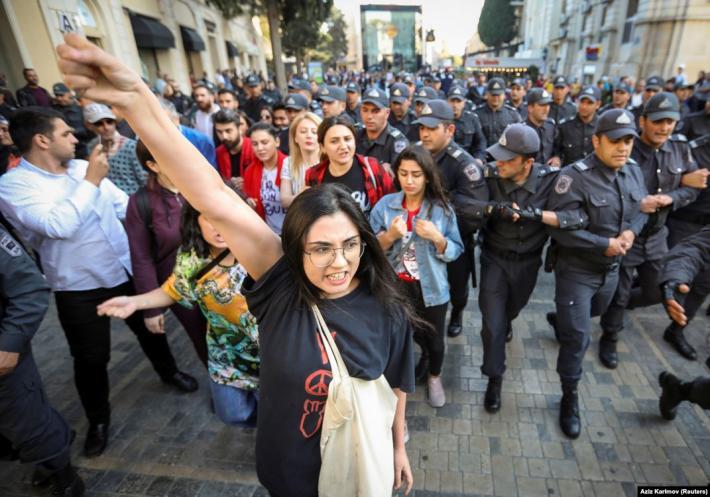 Police in Azerbaijan's capital Baku move in to arrest protesters during a rally in October 2019.

Saturday, December 10, marks International Human Rights Day. This commemorative event arrives in the midst of the 2022 FIFA World Cup, the international soccer tournament that draws the eyes and hearts of fans around the world. This year’s tournament, held in Qatar, has been fraught with controversy. The Qatari government hired migrant workers to build crucial infrastructure for the event, forcing them to work under harsh conditions, and subjecting them to extreme abuse and inhumane treatment. Those investigating these abuses have also come under pressure: in November 2021, for example, authorities detained two Norwegian journalists for 36 hours as they attempted to leave Qatar.

Such conditions reflect the broader environment for political rights and civil liberties in Qatar, where journalists risk being imprisoned for a variety of offenses, nongovernmental organizations can only operate with state permission, and independent activists face government harassment and imprisonment. Numerous Qataris were detained in 2021 after taking part in or supporting peaceful protests organized against a discriminatory electoral law, among other issues. One of the protest leaders, lawyer Hazzaa bin Ali Abu Shraydeh al-Marri, was sentenced to life in prison in May 2022.

Symbolic dates like International Human Rights Day offer space to reflect on and advocate for the rights of the brave people who have been imprisoned or experienced retaliation for standing up to repressive, authoritarian rule. But political prisoners and others fighting for freedom deserve our attention for more than one day of the year. We cannot allow their plight to be sidelined because it is inconvenient to think about them during an event like the World Cup.

It’s not the first time

The World Cup is one of several events in recent months that has drawn criticism for the human rights controversies surrounding it. In what was meant to be a historic summit to discuss the imminent threats posed by climate change, the latest United Nations Climate Change Conference (COP27), held in Egypt in early November, instead became a spotlight on the host country’s abysmal human rights record. The large number of human rights defenders and activists currently detained or imprisoned in Egypt was difficult to ignore, and one case in particular stood out for its perilously high stakes. British-Egyptian democracy activist Alaa Abdel Fattah, imprisoned for his activism, endured a six-month hunger strike, now over, which resulted in the Egyptian authorities denying his family the ability to contact him as the conference took place. They desperately pleaded with the authorities for proof he was alive, and his sister Sanaa took the stage at official summit events to advocate for her brother’s release. She faced threats from Egyptian officials who accused her of calling on foreign entities to intervene in the country’s internal affairs.

Participating governments could have added to this pressure and set the stage for the release of Abdel Fattah and numerous other political prisoners, by conditioning Egypt’s hosting role on freeing political prisoners ahead of COP27. Instead, the conference’s setting appeared hypocritical, as climate justice depends in large part on respect for democracy and human rights.

Similarly, this fall’s G20 summit saw leaders of multiple countries that hold political prisoners convene for strategic discussions. The lives and freedoms of imprisoned human rights defenders, journalists, and prodemocracy activists in Saudi Arabia, China, Turkey, Russia, Mexico, India, and even the host state Indonesia, were superseded by “other priorities.” In Indonesia, human rights defender Victor Yeimo, who has spoken out on the rights abuses occurring in West Papua, was arrested in May 2021, reportedly due to his involvement in antiracism and self-determination protests two years prior. Charged with crimes including treason, he remained in detention while the G20 met. His case and others across the various member states should have been highlighted, as respect for international human rights principles and commitment to strong democracies are key to long-term national and global security and economic stability.

A commitment beyond a day

As soccer fans across the globe fix their eyes on Qatar, we must not forget that the World Cup was made possible by authorities committing extensive human rights abuses that resulted in the death of thousands of workers and the imprisonment of activists. Democracy and human rights advocates have an obligation to confront the hosts, attendees, consumers, and profit-makers with this tragic fact. This, and other human rights issues in Qatar, including the plight of three activists who have languished in jail since July after organizing a social media campaign against arbitrary travel bans, should be at the forefront of our minds.

International Human Rights Day reminds us to recognize and support imprisoned and detained human rights defenders. But our intentions on this day cannot occur in isolation and must be integrated into long-term commitments to democracy’s defenders. Democratic governments and civil society must pressure the perpetrators of human rights abuses, even when the is focus is shifted to other topics. We must continue to support those brave people who have sacrificed so much, until the day when we no longer mark our calendars to stand in solidarity with them. The day they are all freed.