Interview with Goli Ameri: On Women’s Rights in Iran 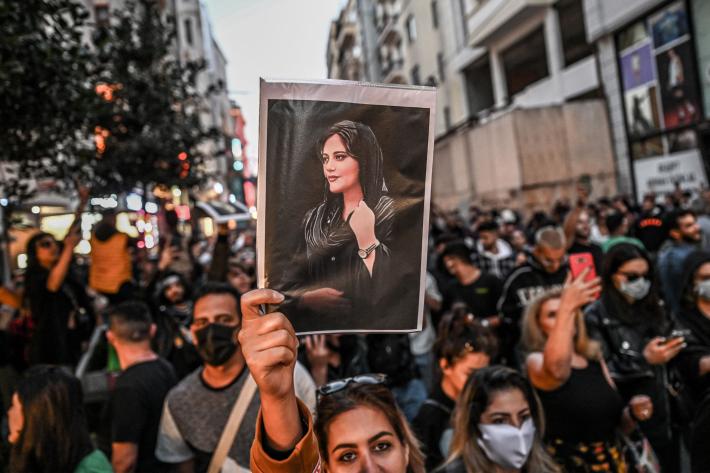 As we closely follow the protests in Iran following the suspicious death of 22-year-old Mahsa Amini, who was in the custody of Tehran’s infamous “morality police,” we interviewed Goli Ameri, Vice Chair of our Board of Trustees. Ms. Ameri is an Iranian American businesswoman, and a former US diplomat.

In addition to your deep commitment to human rights around the world, the situation in Iran hits you on a more personal level as well. Do you mind sharing a bit of your personal story with our readers?

When I served at the US State Department, the Institute for International Education gifted me a book, which showed that Iran in the 1970s had the largest number of foreign students in the United States. I was one of those students. During the beginning phases of the 1979 revolution, I was spending the summer in Iran. A second cousin visited my parents’ house. In the heat of the typical political discussions of those days, he told my mother and I that we should be more properly covered. My reserved mother, though raised in an open-minded family, in her quiet way had always felt sidestepped as a girl. It felt that this comment was a last straw for her. She was livid. His point at that time is what we often hear in the Iranian streets today: “cover yourself since it excites men.” My mom shot her famous glare at him and said, “Sounds like the problem is yours and maybe you need to reassess your proclivities.” How often are we hearing this exact same refrain in videos coming out of Iran today?

These are common stories shared by Iranians and among its diaspora. After the women’s movement in the 60s, similar to Western countries, our mothers wanted more for their daughters. Yet there was a conservative element who felt they were losing control. As we all know they tend to come for the women and their rights first.

What do the ongoing protests indicate to you, both for Iran and for women’s rights more broadly?

We are six decades into the women’s movement. Some in the United States are wondering why we are backpedaling, and the women in Iran are wondering why they are stuck in quicksand. Religion obviously brings comfort to many and it’s a very personal endeavor. We have heard about the optics of the US Supreme Court mixing religious beliefs and the law. The women in Iran would like to practice their religion independently and not have their lives dictated by others. In many ways, women’s rights are not just an Iran problem but a problem that belongs to all humanity; hence we all now have the responsibility to speak out against injustices.

What do you want people to know about the women of Iran and how we can better support their fight for human rights?

Women in Iran are educated and open-spirited. Women make up a significant number of university graduates in recent years, and the literacy rate women aged 15–24 is 98 percent. Robert Kaplan, the author and one of Foreign Policy’s World Top 100 Global Thinkers, spoke of his experience with Iranian women in his book The Ends of the Earth. During a visit to Oregon, he said to me (in so many words): Iranian women don’t shuffle out of a room with their back to the door. When they’re done talking to you, they turn around and just walk out. And when you take a picture of them, they always smile. To me, this image felt a very telling portrait of the women in Iran: independent and brimming with life.

The evolution of the Iranian women’s desire for parity did not stop because the Islamic Republic came to power in 1979. Women in Iran are fighters not just because they had to be, but because they expect more of themselves and those around them. They want to experience life at its fullest on their own terms and they want to have the independence to make their own choices. Removing the hijab is a symbol of all the other rights and freedoms that are missing in their lives.

What do you believe the international community needs to do to support peoples’ freedoms in Iran?

Freedom is a basic right and a fundamental desire of every human being. When I served as a US Representative to the UN Commission on Human Rights and subsequently at the UN General Assembly, so many countries would not cast a censorious vote on the human rights record in Iran, because they had economic or other political ties to Iran. Canada was the bravest; some in the European Union lagged, and the majority of nonaligned countries either abstained or voted against.

If the UN and its member countries cannot stand up for freedom and human rights, then private citizens, civil society, and private companies like Starlink1  must step in and provide solidarity and propagate the voice of Iranian women.

As you reflect on your life, and how different it might have been had you stayed in Iran, what stands out to you most?

My life and the lives of millions of people of Iranian heritage who emigrated would have been radically different. In the United States, we have the means to find and achieve the best in ourselves. We have the possibility to voice differing opinions; we have the ability to leverage the legal system to fight for our rights, even in the tense political times that we are experiencing today. People in Iran do not have these freedoms.

How do you think the protesting women in Iran draw strength to continue demonstrating despite the danger they are in?

If we all take a minute and think about what’s happening in Iran, we realize the incredible bravery of Iranian women. Their bravery is nourished by the fact that they are imprisoned in a system that does not allow them to flourish; caught in a system where a group of men with conservative and unevolved attitudes are dictating their lives.

The term “morality police” is shocking for people in free societies. Do you have any first-hand experience with them?

Unfortunately, in many parts of the world religion is abused as an excuse for suppression and a morality police takes on different forms in different societies. Many who have ever visited Iran have experienced their bullying, and many who live there experience it as a part of everyday life. I took my children to visit this rich and ancient land when they were young, and one of their most traumatic experiences in life occurred near the bazaar, in a similar scene to the harassment and bullying we are seeing today. At their best, the morality police are people who find their one moment of glory in life by repressing others and feeling righteous in promoting their ideologies.

There have been these types of protests here and there for a while, since ’79 certainly. But the regime has always managed to put them down. What do you hope to see happen that will support change in Iran?

The unrest in Iran, just like any unfree society, is a simmering cauldron. At some point the cauldron will overflow, especially when other leaders speak truth to power. While serving as the US Representative to the UN General Assembly, there was much criticism of the United States, but oddly enough people always looked to it to lead and to take the first step. The United States, because of its democratic ideals—as challenged as they have been lately—is and will continue to be a force of good for the world and humankind and a beacon of freedom. Many other countries, because of their economic ties to Iran, will not vocalize or support just values. At the very least however, the EU, as it has done recently with Russia, must step up and demonstrate solidarity, as should democracies like India or other UN Community of Democracy members in Asia and Latin America.

Goli Ameri is the Vice Chair of Freedom House’s Board of Trustees. She is the co-founder and chief executive of Startitup. She is a former US Assistant Secretary of State for Educational and Cultural Affairs and Under Secretary for Humanitarian Diplomacy at the International Federation of Red Cross. Ms. Ameri was a Representative to the 60th Session of the United Nations General Assembly and served as a Public Delegate to the 61st session of the United Nations Commission on Human Rights in Geneva.