Attempts to disrupt a boycott movement on social media only highlight the country’s unfree electoral conditions. 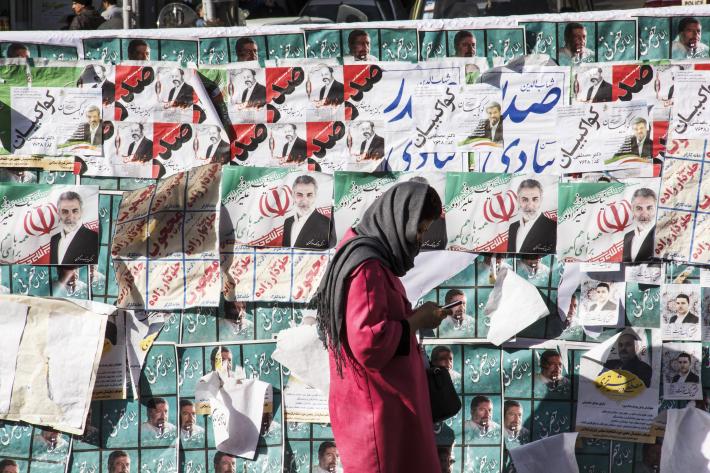 Some Iranians will head to the polls on June 18 to vote for a new president, but many others have used social media to call for a boycott of what they regard as a sham election. Well-known candidates who were deemed insufficiently loyal to the clerical establishment have been disqualified from running, leaving voters with little real choice.

Iran’s unelected supreme leader, Ayatollah Ali Khamenei, has encouraged voters to ignore the boycott movement and repeatedly emphasized the importance of participating in elections to showcase the regime’s popular legitimacy on the world stage. However, the authorities have also responded to the threat of boycotts and protests by suppressing dissent on social media, ironically underscoring the country’s restrictive electoral environment.

Putting the squeeze on social media

Social media represent one of the few remaining spaces where Iranians can speak relatively freely, share information, and express opinions about pressing issues, such as elections. Over the years, authorities have responded with a multilayered strategy that includes restricting access to online platforms and manipulating discourse on the services that remain. Iran’s score of 17 out of 100 on Freedom House’s Election Vulnerability Index reflects both the tightly managed electoral system and the extensive control over online information that reinforces it.

Thousands of websites are blocked in Iran, and popular platforms such as Facebook, YouTube, and Telegram are filtered. While Instagram and Clubhouse currently remain unfiltered, there have been recent reports of disrupted access to these platforms. During times of protest or unrest, the regime has also resorted to total internet shutdowns. In response to the Green Movement protests that followed the 2009 presidential election, for example, the authorities throttled the internet and blocked access to social media sites to prevent protesters from organizing and mobilizing online. More recently, officials implemented a weeklong, nationwide internet shutdown to stifle 2019 antigovernment protests and cover up a violent crackdown by security forces. Whether through blocking, filtering, or connectivity disruptions, the regime has shown its determination to cut Iranians off from the open internet.

Ahead of this month’s election, social media platforms and online media have been awash with propaganda and disinformation intended to boost voter turnout, portray the balloting as legitimate, distract voters from the flaws in Iran’s electoral system, and push for the favored outcome. For example, Iranian authorities and pro-establishment actors are flooding Clubhouse chat rooms with this sort of speech in what activists describe as an attempt to co-opt an unfiltered platform to promote official narratives. Earlier this spring, authorities called for a domestic version of Clubhouse, which could allow them to monitor conversations more easily.

Independent journalists and citizens are harassed online when they talk about politically sensitive subjects, which ultimately drowns out their voices, encourages others to self-censor, and leaves space for pro-establishment commentary. In the run-up to the election, authorities have also intensified judicial pressure and harassment targeting journalists who criticize state-backed candidates. Several journalists who reported on human rights abuses allegedly perpetrated by Ebrahim Raeesi—the current head of the judiciary and an officially approved presidential candidate—were summoned by judicial or security authorities and pressured to stop criticizing Raeesi on social media.

The regime has also introduced legislation to prevent the public from accessing uncensored information and stifle citizens’ ability to mobilize on social media. A new resolution ratified in January ostensibly aims to protect election outcomes from misinformation and fake news by legalizing the surveillance of online media outlets, independent journalists, and activists and by penalizing those who publish content deemed to be “untrue or misleading.” A letter from the Iranian judiciary that was leaked in May shows that the authorities were planning to filter Instagram, Google Play, and internet circumvention tools ahead of the election to restrict social media users’ ability to organize boycotts. Though the filtering order was delayed following the leak, the parliament is considering a bill that would increase pressure on foreign and domestic social media platforms to comply with local regulations or face blocking.

The need for international solidarity

In the face of growing public discontent and dissatisfaction even among establishment figures, the supreme leader and his allies view the upcoming presidential election as especially consequential for the regime’s survival and legitimacy. Their anxiety is playing out online: the leaked filtering plan, the new bill threatening to block foreign social media, and the recent election misinformation law all suggest that the establishment increasingly views the remaining online spaces more as a threat than as a convenient propaganda tool. International media, civil society, and private companies should be prepared for an escalation of digital repression before or after the election, particularly if there are protests or boycotts.

Where possible, international civil society organizations should offer resources in Farsi on topics such as electoral integrity, media literacy, and alternative means of communication in case of connectivity disruptions. They can also provide the public with online information about digital security and the hazards of using domestic applications promoted by the Iranian regime, and suggest secure ways to connect to filtered applications, such as virtual private networks (VPNs). Technology companies should lend support to trusted civil society partners to bolster these efforts.

International media networks that are accessible in Iran through satellite broadcasts, including Farsi-language outlets, can supply the Iranian public with the sort of information and analysis that is censored by the Iranian authorities online. Particularly useful content would include reliable information about the election, fact-checking services, and ways to adapt to internet shutdowns or further social media blocking.

While international actors probably cannot change the increasingly repressive trajectory of Iranian social media controls before election day, they can and should show solidarity with and support for the rights of Iranians. Doing so not only helps to prepare and empower Iranians, but also serves as a constant reminder not to inadvertently legitimize an election that is being conducted in strikingly undemocratic conditions.

Joint Letter: US Must Prioritize Human Rights in Shaping Future Policy Toward Iran