Iranians Seek Freedom and Their ‘True Selves’ on Social Media 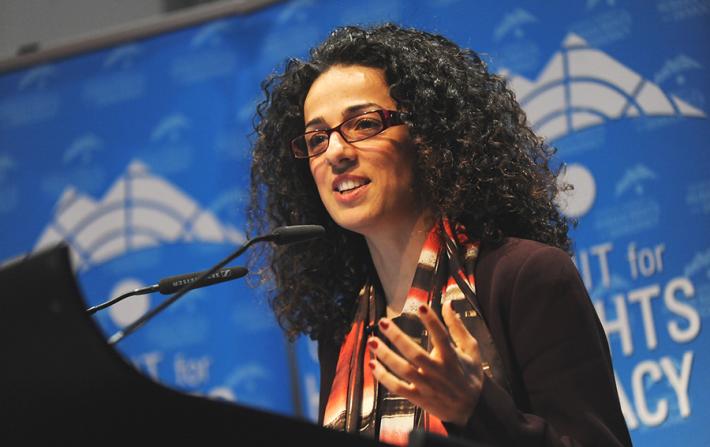 Masih Alinejad broadcasts a weekly program on Voice of America’s Persian service and has attracted more than a million “likes” on her Facebook page, “My Stealthy Freedom,” which is devoted to the rights of Iranian women. She spoke with Freedom House while attending the recent Mark Palmer Forum for the Advancement of Democracy.

Freedom House: Will the strategies that civil society uses to promote human rights in other countries work in Iran? Or is Iran in some way impervious to the usual efforts?

Alinejad: There’s a great platform for citizen journalism in Iran. There are also a lot of redlines, things that people are not suppose to write about. There’s a lot of self-censorship by state media. For instance, there’s no platform for asking officials a simple question about the hijab issue—the mandatory hijab. There’s also no platform for talking about the supreme leader, or religion. You’re not allowed to ask a simple question about Islam or Sharia law. There is a huge number of political prisoners, but there is not a newspaper to ask about that. There are no newspapers to talk about executions. So where do we get the news? Through social media. Through citizen journalism. People know how to bypass authorities and reach the internet.

We have huge amounts of information about political prisoners, who has been executed, the hijab issue—through social media…. If you go to personal accounts on Facebook, you never see a headscarf. You see women’s true selves. I call it a cultural war between two lifestyles, the one that the government wants people to follow and the lifestyle that people want to have. It’s on Iranian social media.

FH: This may be true for people in north Tehran, the well-to-do part of the city, but what about elsewhere?

Alinejad: When I left Iran, none of the people in my village had satellite dishes. But now they do; they have WhatsApp, Instagram, they see my program. People in small towns want to have their own channel for information. After the 2009 election, when the government denied all the killings [of protesters], people did their own reporting and wrote about it on social media.

Even in small villages, young people are so progressive. Maybe they are not part of a party or a women’s rights group, but when they never see their true selves on their own TV, their solution is to go to social media and have their lives there. It’s where people can really have freedom. I see a lot of followers from my village saying that we see Lebanon now, we see Syria, but women there are not forced to wear hijab. The youth want to have personal freedom.

My parents are farmers. On the farm, women and men stand together and do the job together. But in official places, women are separated from men. In Kurdish areas, they are suffering from poverty and a lot of other problems. But they don’t force women to wear hijab and they do things together, they play music. But on Iranian TV, you will never see an instrument, any kind of instrument. You never see your own lifestyle on state TV.