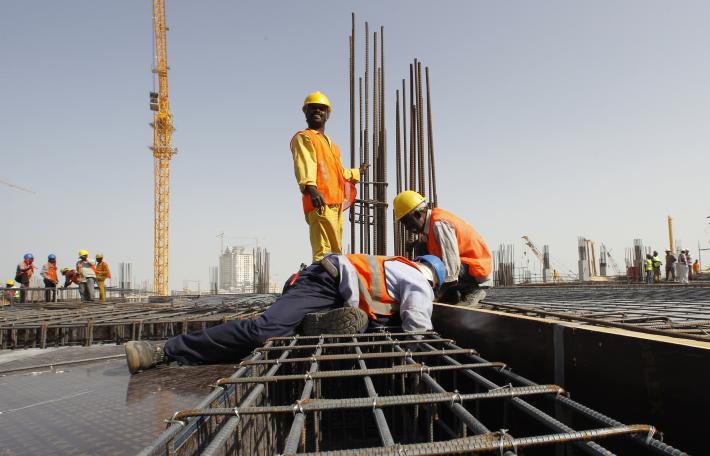 A Spotlight on Qatar

The international spotlight is on Qatar for the 2022 World Cup. It’s not only the football matches that are receiving global attention, but also Qatar’s harrowing human rights record. To fully appreciate the controversy surrounding this year’s host country, it is important to understand the long history of repression.

Qatari citizens only make up about 10 percent of the population, while the majority of people living in the country are foreign nationals, largely migrant workers from South Asia. This disparity is not uncommon in the Arab Gulf, where migrant workers flock for employment opportunities.

While Qatari citizens are among the wealthiest in the world, the large portion of noncitizens not only earn low wages but also lack the same political rights and civil liberties awarded to Qataris; exploitative foreign labor laws box out noncitizens from realizing the same economic opportunities as citizens. This discrimination and labor exploitation was foundational to Qatar’s preparations for the World Cup.

The Qatari government has spent billions of dollars in infrastructure projects to prepare for the World Cup. These projects, which included constructing stadiums, hotels, highways, and expanding the airport in Doha, largely relied on migrant labor. They also came at a deadly cost.

In recent years, it has become clear that the basic human rights of migrant workers who contributed to World Cup infrastructure projects were significantly violated. Reporting has documented grueling working conditions, long hours, unclean living situations, and wage-theft. The Guardian estimates that thousands of migrant workers have died in Qatar since the country was awarded the World Cup. And, while human rights advocates have been calling on FIFA to provide financial remedies to the families of the deceased, that has yet to be realized.

Unfortunately, this horrific practice of exploiting migrant labor is not new in Qatar. Migrant workers, who make up 90 percent of the workforce, are constrained by the country’s sponsorship system known as the kafala system. This is a colonial-era work visa sponsorship system that still exists in countries such as Jordan, Lebanon, and many Arab Gulf states. The kafala system offers very few protections for laborers and essentially gives employers total control over foreign workers including their wages, ability to travel, and immigration status.

Although Qatar announced major reforms to the kafala system in 2020, these changes in practice fell short of what was promised. Human rights groups began sounding the alarm about the potential for abuse of foreign workers back when Qatar was awarded the right to host the World Cup in 2010. Unfortunately, neither FIFA nor Qatari authorities did much to provide meaningful protections for migrant workers.

A Long History of Repression

Qatar’s history of violating basic human rights extends far beyond labor exploitation. Freedom of expression, press freedoms, and freedom of association are all severely restricted in Qatar, which Freedom House ranks Not Free in Freedom in the World, an annual survey of political rights and civil liberties. In fact, Freedom House analysis shows that the human rights situation has not improved, and has in fact declined, since Qatar won the right to host the World Cup back in 2010.

Most print and broadcast media outlets are closely linked to the state and authorities impose tight restrictions on journalists, leaving very little room for independent journalism. Ahead of the World Cup, foreign media outlets were informed that they would need special permission to speak with locals, a clear effort by authorities to control the narrative around the event.

Those who are critical of the state, including activists and journalists have received incredibly harsh prison sentences often following unfair trials. These practices encourage self-censorship and significantly undermine any space for free expression. Recently, a criminal court in Qatar handed down life sentences to several human rights activists simply for their involvement in peaceful protests.

Discriminatory laws significantly limit the civil liberties of women, religious minorities, and LGBT+ people. For example, the male guardianship system requires women to get permission from male guardians to exercise basic rights such as get an education, marry, travel abroad, and access reproductive healthcare.

Similarly, LGBT+ people living in Qatar face extreme discrimination and harassment. Qatar’s Penal Code criminalizes a range of consensual same-sex sexual acts and includes jail terms for those found guilty. While Qatari authorities have said everyone will be welcome at the World Cup, regardless of their background, reports of discrimination against match attendees based on their LGBT+ expression have already emerged.

Don’t Let Up the Pressure After the Games End

Qatar is not the first repressive regime to host a major international sporting or cultural event, and it likely won’t be the last. China hosted the Winter Olympics while committing acts of genocide against the Uyghur people in Xinjiang. Russia hosted the 2018 World Cup under the same regime that is currently waging a brutal war against its democratic neighbor of Ukraine. While not a host, Iran has made its authoritarian mark on the games through the silencing of its players who dared to show solidarity with protesters in Tehran and through harassing and threatening the families of players.

Those following the World Cup, including democratic leaders in attendance and businesses sponsoring the event, must not ignore the ugly scene taking place behind the spectacle of the beautiful game. The abuses happening in the country —against women, LGBT+ individuals, migrant workers, and other marginalized populations — demand our continued attention long after the last goal is scored.