The coronavirus pandemic has been especially harmful for people already living at the margins of their societies. 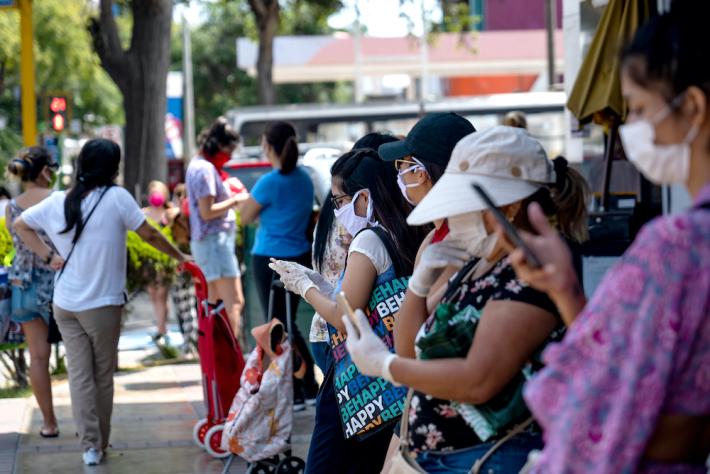 People line up for groceries in Peru, where the government has limited movement based on gender amid the coronavirus outbreak. Image credit: Myriam B / Shutterstock.com

A few days ago I attended a Facebook Live session in which transgender leaders in Pakistan were discussing the devastating impact of COVID-19 on their communities. As a queer Pakistani woman with deep ties to the lesbian, gay, bisexual, transgender, and intersex (LGBTI) communities back home, I know how easy it is for their fragile patchwork of support to fall apart, especially for transgender people, who often depend on work in the informal economy.

During the call, transgender leaders talked about the fact that the concept of social distancing does not work in their context, because they live in cramped conditions at the deras—homes shared by several members of the transgender community from the same lineage. These homes are necessary because many transgender people are rejected by their biological families or not able to be fully themselves when living with them. Social distancing rules have also affected the incomes of transgender people, who sometimes have to support both biological families and their families within the guru-chella system. (A guru is an elder in the community who takes care of one or more younger transgender people, known as chellas.) As a result, transgender people in Pakistan, like LGBTI communities in many other parts of the world, are experiencing a threat to their very existence.

At Freedom House’s Dignity for All program, where I work, we provide emergency assistance, rapid-response funding, and security support to human rights defenders and civil society organizations facing threats or attacks due to their efforts to uphold the rights of LGBTI people. Since the start of the pandemic, we have observed the disproportionate impact of COVID-19 on these communities. They were already under pressure due to criminalization, stigma, violence, and discrimination, and now they are being pushed even further to the margins.

Governments’ responses to COVID-19 have often intensified the criminalization of LGBTI people under the guise of public health. This pattern includes, for example, a raid on an LGBTI youth shelter in Uganda in March, after which 23 people were formally charged with “a negligent act likely to spread infection or disease” and “disobedience of lawful orders.” In the Philippines, law enforcement officials have been publicly humiliating LGBTI people for violating curfew. The government in Hungary proposed a law that would end legal recognition of transgender people in the midst of the crisis.

Restrictions on movement are also affecting LGBTI communities in unique ways, making food insecurity the most significant challenge to emerge from this crisis. In many countries, LGBTI people rely heavily on informal employment, and they need to be able to leave their homes to work and access food. Moreover, in Panama and Colombia, stay-at-home orders are being enforced on a binary gender basis, with men and women allowed to leave the house on different days, which is especially worrying for nonbinary and transgender people who may get stopped and questioned. Border closures are preventing those facing danger or persecution from seeking safety or accessing gender-affirming care and antiretroviral therapies (ARTs).

Unfortunately, the effects of official restrictions are frequently compounded by atrocities committed at home by family members. We are hearing from LGBTI human rights defenders in sub-Saharan Africa, North Africa, and Central Asia who have been forced to stay with family due to loss of livelihood and inability to cover their living expenses, and who are experiencing homophobic and transphobic abuse and trauma from family members and roommates. They are being outed regarding their work as LGBTI human rights defenders as well as about their identities. A new report by Outright Action International, Vulnerability Amplified, highlights the elevated risk of family or domestic violence as a major concern for LGBTI people who are forced to take shelter with family members.

Falling through the cracks

COVID-19’s disparate impact on LGBTI communities is a direct outcome of preexisting and often official discrimination. Given that some 70 countries still criminalize same-sex relations, it is little wonder that LGBTI people and their families are in many cases ineligible or practically unable to receive government subsidies and food deliveries for low-income residents—particularly when the aid is distributed by police, as in Sri Lanka. Victor Madrigal-Borloz, the UN Independent Expert on Protection against violence and discrimination based on sexual orientation and gender identity, said at a recent town-hall-style meeting that “there is an inextricable relationship between legal recognition and access to relief.”

As we begin to assess the incredible damage to LGBTI civil society around the world, it is important to remember that this is an unprecedented crisis, and we don’t yet have a road map as to how to effectively address the challenges it presents. What we do know, based on other humanitarian crises, is that LGBTI communities often fall through the cracks because the mainstream humanitarian response is not sensitive to their needs, and because the communities themselves are rarely equipped to endure and recover from such extreme conditions. We must advocate for and invest in an LGBTI-sensitive humanitarian response and continue to dedicate resources to supporting LGBTI civil society writ large. Without these investments, it is not clear who would still be able to take up the human rights struggle after the pandemic has passed.

The United States Hesitated to Protect Europe’s Jews from Nazi Brutality. We’re Not Condemned to Reenact That Error Today.