The Community of Democracies is soliciting nominations for the 2019 Mark Palmer Prize to honor diplomats whose work has advanced democracy and human rights. 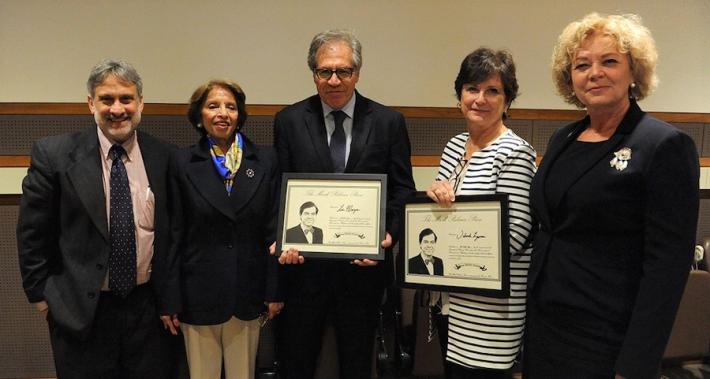 The Community of Democracies, a global intergovernmental coalition that supports adherence to common democratic values and standards, is soliciting nominations for the 2019 Mark Palmer Prize.

The Mark Palmer Prize was established by the Community of Democracies in 2011 to honor diplomats whose work has advanced democracy and human rights. The award was inspired by the late US Ambassador to Hungary Mark Palmer—a longtime Freedom House trustee and vice chairman—who devoted his life to supporting democratic transitions in Hungary and in closed societies globally.

The Mark Palmer Prize has been awarded to diplomats from all over the world, including Peru, the Czech Republic, Lithuania, Canada, the Netherlands, and the United States. It seeks to honor individuals working tirelessly to defend democracy, human rights, and civil society.

The 2019 recipient of the Mark Palmer Prize will have done some of the following:

1. Demonstrated support for civil society’s right to freedoms of assembly, expression, and other principles as outlined in the Warsaw Declaration of the Community of Democracies.

4. Sustained efforts to support human rights, including actions that resulted in a release of prisoners of conscience, an end to cruel and inhuman punishment, or other tangible improvements.

7. Identified and articulated the importance of democratic values, despite working in a closed or authoritarian society.

8. Contributed innovative ideas and support for the consolidation of democratic institutions in countries in transition.

9. Upheld the idea of rule of law in countries where it is not practiced.

To nominate someone, please reach out to Jennifer Stapleton at [email protected].