Mauritania: ‘Slavery Is the President’s Business’ 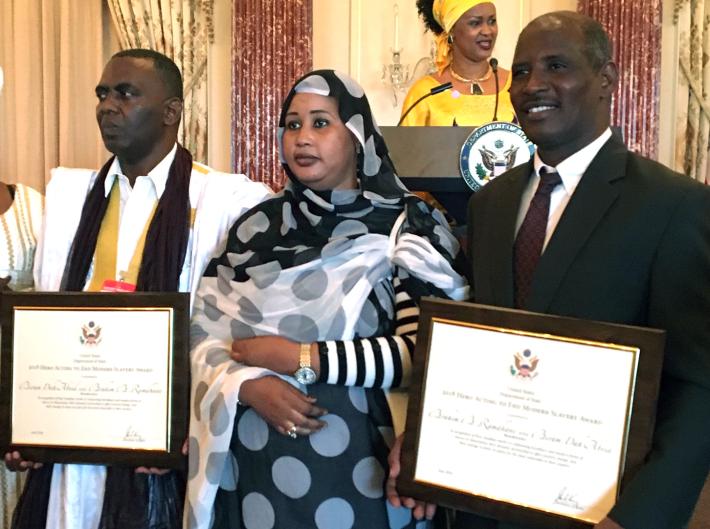 Above: Biram dah Abeid and Brahim Bilal Ramdhane, IRA-Mauritania’s president and vice-president, received awards from the U.S. Department of State.

After 18 months’ imprisonment for their antislavery campaign in Mauritania, activists Biram Dah Abeid and Brahim Bilal Ramdhane have resumed their work as leaders of the Initiative for Resurgence of the Abolitionist Movement (IRA). The U.S. State Department honored them in June 2016 for their efforts against human trafficking; both men are children of slaves. They spoke to Freedom House during a recent visit to Washington, DC.

Freedom House: The two of you shared a prison cell in a remote part of Mauritania before your release in May 2016. Why are the authorities acting against IRA again now, and what has happened to the organization’s other members?

Biram Dah Abeid: Since June 29, the Mauritanian government has arrested nearly a dozen members of IRA, most of them part of the organization’s leadership, and no one knows exactly where they are. Their families don’t know, the lawyers don’t know. Police also confiscated laptops and paperwork in people’s homes, without having any kind of warrant.

Dah Abeid:  Why is the crackdown happening now? Because in prison, we gained a lot of support from the population and the international community. The government, which doesn’t have much interest in democracy, is frightened by popular figures. When we left jail, I made a speech, which also had a good reception. For authorities, IRA’s support in the EU and the United States means the organization has become threatening. By arresting our members and trying to tarnish our reputation in the media while we are outside of the country, they are trying to scare us into not coming home. But we will go back to Mauritania to defend and protect human rights.

Freedom House:  Lawmakers criminalized slavery in 2007 and then adopted a new law in 2015 to make it a crime against humanity. So is the real issue slavery or is it power?

Dah Abeid:  I think authorities are trying to stop any move toward democracy. We work not just to help victims of traditional slavery. IRA is helping people who have had land expropriated and trying to improve the rights of Haratines [descendants of slaves]. The state is complicit with slaveholders and discriminates against former slaves and people who are not Beydane [the ethnic elite, also known as White Moors]. The government gives property to the well-to-do, not the people who work the fields.

Freedom House: But if slavery is prohibited in Mauritania, why does it persist?

Ramdhane: The laws were changed to satisfy the EU and the United States. Because authorities are playing a game. They changed the law to show the international community goodwill and progress. But in reality they don’t actually apply the law.

Ramdhane: The power structure is based on tribes, and dominant tribes, particularly the Beydane, control the economy, government, military, and police. Dominant tribes are the ones with slaves, and the government allows slavery to continue to maintain the tribes’ support. This is why the system is maintained today.

Ramdhane: The point of slavery is honor and status: The powerful have slaves. At the same time, society disapproves of people who admit to actually being slaves or descendants of slaves. Even police won’t recognize complaints submitted by victims of slavery. They’ll ask you: “Why would you say that?” It’s a mentality of our society. That is why IRA was started: to counter this mentality and eradicate slavery in Mauritania.