Meet the Faces of Internet Freedom

In a new photo essay, Freedom House highlights 12 remarkable individuals who highlight that everyone can do something to fight against censorship and authoritarianism — both online and off. 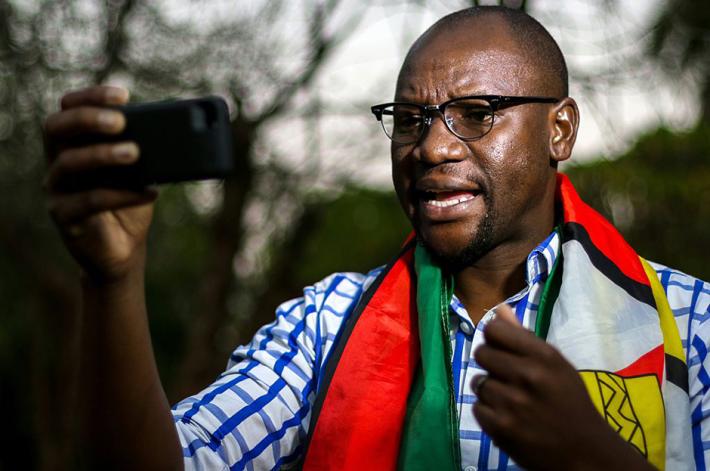 By the Freedom on the Net team and Shannon O'Toole

What do a Ugandan feminist, a Bahraini human rights activist, and a "Multimedia Monk" all have in common? Their stories are all impacted by the struggle for internet freedom. In the photos below, Freedom House highlights 12 remarkable individuals who fought injustice through their activism online.

Evan Mawarire, Zimbabwe Disillusioned by the Zimbabwean government’s failure to provide basic services and stem economic decline and corruption, Zimbabwean pastor Evan Mawarire draped a Zimbabwean flag over his shoulders and voiced his grievances in a series of 2016 YouTube videos. The series launched the #ThisFlag campaign, which saw Mawarire lead a strike that summer that paralyzed much of the country and brought throngs of antigovernment demonstrators to the streets. In response to his activism, Mawarire was arrested and charged with subversion; authorities freed him on bail after coming under intense public pressure, and Mawarire subsequently fled the country. He has since returned to Zimbabwe, and continues to speak out against the government despite being arrested repeatedly as legal proceedings against him continue. In September, he was once again charged with subversion, a day after he hosted a live Facebook discussion in which he criticized Zimbabwean president Robert Mugabe.

Nabeel Rajab, Bahrain Nabeel Rajab, one of Bahrain’s most prominent rights activists and most followed Twitter users, has been in and out of jail since 2012 in connection with various cases linked to his online activism. In 2016, he was jailed over tweets and retweets critical of civilian deaths resulting from Saudi-led coalition airstrikes in Yemen, and which accused security forces of torturing detainees at Bahrain’s Jaw prison; for these remarks, he was charged with spreading rumors during wartime and insulting a statutory body, respectively, and faces as many as 15 years in prison. Rajab was held in solitary confinement until April 2017, when he was transferred to a hospital following complications from surgery. In July, he was convicted in absentia on separate charges of “disseminating false news” in connection with televised remarks about torture at Jaw prison. The case related to his Twitter activism remains open; in the meantime, he has been transferred from the hospital to Jaw prison, where he risks becoming a victim of the same abuses he sought to expose.

Pavel Sheremet, Belarus (1971-2016) Veteran journalist Pavel Sheremet, who was renowned for his investigative reporting on state corruption in Belarus, Russia, and Ukraine, was killed in a July 2016 car bombing in Kiev. Most recently, Sheremet had worked for the independent online outlet Ukrayinska Pravda, where he covered the conflict in eastern Ukraine, among other topics; he had settled in Ukraine after severe pressure he encountered while based in Belarus and then Russia had made it nearly impossible for him to work. While Ukrainian authorities expressed outrage over his death and launched an investigation, journalists have criticized Ukrainian investigators for failing to interview key witnesses and for dismissing critical evidence. The group or individual behind the attack remains unknown.

Nahed Hattar, Jordan (1960 - 2016) Well-known Jordanian writer and journalist Nahed Hattar in August 2016 sparked widespread outrage in Jordan after posting to Facebook a cartoon that depicted God as in the service of an Islamic State fighter. Though Hattar, who was from a Christian family, apologized and deactivated his Facebook account amid the maelstrom, he was nevertheless charged with insulting Islam and inciting sectarian strife. In September, while entering the courthouse where he was to face trial, he was shot and killed in the presence of his wife and two children; the assailant was promptly arrested and in December was sentenced to death. Hattar’s family and supporters have criticized the government for failing to better protect the writer after they reported to authorities a slew of death threats he received after posting the cartoon.

Ebtisam al-Saegh, Bahrain Rights activist Ebtisam al-Saegh, who with the advocacy group Salam for Democracy and Human Rights documents torture and other rights abuses committee by authorities, has recently encountered severe reprisals for her work. Following sustained legal and other harassment in connection with material she tweeted, in May, al-Saegh received a summons from Bahrain’s National Security Agency (NSA). Upon presenting herself at its offices, she was blindfolded, beaten, and sexually assaulted; her attackers also interrogated her about other rights activists and her association with the UN Human Rights Council, and attempted to coerce her to use her Twitter account to announce her retirement as a rights activist. Instead, in July, she used her Twitter account to denounce abuse of women by NSA agents and to criticize Bahrain’s king. Hours later, plainclothes officers acting without a warrant raided her home, confiscated al-Saegh’s phone and national ID card, and took her into custody. She was released in October, but now faces terrorism charges in connection with her July tweets.

Stella Nyanzi, Uganda A controversial figure in Uganda, academic and activist Stella Nyanzi’s advocacy on behalf of women and LGBT people began attracting widespread attention in 2016 as she used her social media accounts to post support for the political opposition, as well as writings about sex and sexuality. She gained further prominence later that year, when she protested being locked out of her office at Makere University by stripping naked on university grounds and circulating a video of the demonstration. In 2017, Nyanzi began vocally criticizing longtime Ugandan president Yoweri Museveni for failing to deliver on a campaign promise to provide sanitary pads for schoolgirls, and in April was arrested and charged cyberharassment and offensive communication for calling the president “a pair of buttocks” on her Facebook page. Nyanzi was detained for a month before being released on bail; meanwhile, prosecutors in the cyberharassment case are requesting that she undergo a psychiatric evaluation, a move Nyanzi’s legal team describes as an effort to delegitimize her work.

Ahmed Mansoor, United Arab Emirates Ahmed Mansoor has fought to roll back restrictions on political rights and civil liberties in the United Arab Emirates for more than a decade. His criticism of arbitrary detentions, torture, and corruption in the judiciary has resulted in a formal travel ban, as well as eight months in jail he served in 2011 on a conviction for “insulting officials,” he has also been repeatedly targeted with sophisticated spyware. In March 2017, a dozen plainclothes officers broke into Mansoor’s home in Abu Dhabi and arrested him; he was then charged with using social media to publish false information that damaged national unity and the country’s reputation, and placed in solitary confinement, where he remains despite a joint campaign by NGOs and watchdog organizations aimed at securing his release.

Carmen Aristegui, Mexico Carmen Aristegui, one of Mexico’s most prominent journalists, has faced repeated cyberattacks in apparent retaliation for numerous exposés implicating government officials and security forces in serious misconduct. Aristegui’s news website—established after she was fired from her job at the MVS radio station after her team exposed a real estate scandal involving Mexico’s first lady—has been hacked repeatedly, including in the hours before staff was set to publish a piece that implicated federal police in a massacre of 16 civilians. Meanwhile, unidentified hackers, using spyware programs purchased by the Mexican government, have sent Aristegui and her teenage son dozens of carefully personalized text messages containing malicious links which, if opened, permits extensive monitoring of mobile phone usage, and can activate the device’s camera and microphone.

Nguyễn Ngọc Như Quỳnh, Vietnam Nguyễn Ngọc Như Quỳnh, who blogged under the pen name “Mother Mushroom,” defied Vietnam’s repressive communist regime with coverage of controversial issues like land confiscation, police brutality, and constraints on free speech, as well as with her efforts to encourage Vietnamese citizens to engage in political discussions on Facebook. In 2016, Quỳnh was detained and charged with disseminating antigovernment propaganda and held incommunicado for months, with her lawyer later reporting that she has been fed only anchovies and soup and was denied underwear and sanitary pads. Following a one-day trial in June, Quỳnh was sentenced to 10 years in prison—a penalty clearly designed to intimidate other whistleblowers, as well as the country’s growing community of democracy-minded netizens.

Loun Sovath, Cambodia Known as the “multimedia monk,” Cambodian activist Loun Sovath uses his blog and popular social media accounts to campaign against illegal land grabs by powerful actors, as well as to draw attention to electoral irregularities, women’s rights, and environmental causes. For years, he has battled spurious charges aimed at curbing his activism, including incitement to commit crimes both in Cambodia and abroad; he further faces harassment while filming, and has been banned from Cambodia’s temples and threatened with expulsion from his monastic order. In 2017, hackers seized control of Loun Sovath’s Facebook account, and, while impersonating the activist, used it to attack the country’s embattled political opposition. Loun Sovath was forced to create a new account, though the administrators of the hijacked one remain active, and have sought to confuse Loun Sovath’s followers by intermittently reposting his original content.

News website Mada Masr, Egypt The news website Mada Masr, established in 2013, has become increasingly important as Egyptian authorities systematically shuttered media outlets critical of the government or affiliated with the opposition. Known for its independent coverage of topics ranging from militant attacks to legislative proposals, by 2017 it was widely considered the last independent news outlet operating within Egyptian borders. But in May, Egyptian internet service providers blocked access to Mada Masr, and the state-run news agency hours later cited an unidentified official as saying websites that promoted terrorism or disseminated falsehoods had been banned. Mada Masr’s journalists have nevertheless continued to operate, posting material on alternative platforms like Facebook and Google Drive in order to circumvent the ban, which Egyptian authorities have refused to formally acknowledge or justify.

Mehman Huseynov, Azerbaijan Journalist and video blogger Mehman Huseynov’s investigations into government corruption and human rights abuses—many of which appeared on social media accounts linked to his news magazine, Sancaq—have long drawn the ire of Azerbaijani authorities. Yet in spite of intimidation, repeated interrogations, and threats of violence in connection with his reporting, as well as a travel ban in place since 2012, Huseynov has persisted in his work to expose abuses. In early 2017, he came forward with claims that he had been abducted, beaten, and tortured by police officers, who the following day transported him to a court where he was fined for disobeying police orders. Huseynov’s claims were deemed unfounded following a hasty investigation, and he subsequently became the subject of a criminal defamation suit filed on behalf of the entire police office. In March, he was convicted and sentenced to two years in prison.

To learn more about internet freedom around the world, visit our report at www.FreedomOnTheNet.org.