A Midnight Crackdown in Cambodia

Aided by Chinese support and U.S. indifference, the government has moved to ensure complete dominance ahead of the 2018 elections. 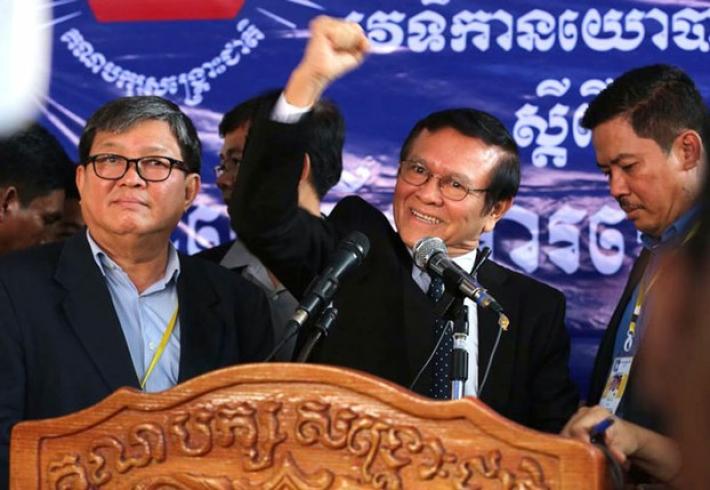 Aided by Chinese support and U.S. indifference, the government has moved to ensure complete dominance ahead of the 2018 elections.

The recent arrest, jailing, and charging of opposition leader Kem Sokha for alleged treason marks the culmination of a steady but sweeping crackdown on dissent in Cambodia. The government of Prime Minister Hun Sen, who has been in power for 32 years and 8 months, has now sidelined five opposition party leaders, muzzled 15 radio stations, expelled two civil society organizations, and shut down the most independent newspaper in the country.

The timing of this crackdown is less surprising than its scope and severity. Ahead of national elections next year, Hun Sen is heavily tilting the playing field to the advantage of the ruling Cambodian People’s Party. Seeking to avoid a repeat of the 2013 elections, in which the newly formed Cambodia National Rescue Party captured 55 out of 123 seats in the National Assembly, he is monopolizing access to resources, the media, and the legal system. This more overt form of repression will leave the forthcoming elections devoid of freedom, fairness, and tangible competition.

The government has an established track record of restricting political rights and civil liberties, but the latest crackdown is abetted by a wider set of circumstances. The most important include China’s nearly unconditional support for the incumbent government and the sudden belittling of democracy and human rights by the United States. This has provided a window of opportunity for Hun Sen, whose “uncanny ability to bend with the political wind” has repeatedly come at the expense of democratic progress.

The further entrenchment of authoritarianism in Cambodia—it has never actually been a democracy—is made possible by its bilateral ties with China. A key part of this warming relationship is the one-way economic traffic: In 2016, Beijing accounted for approximately 36 percent of Cambodia’s bilateral aid and 30 percent of its direct investment. This represented nearly four and ten times as much, respectively, as the share coming from the United States.

The United States has traditionally limited its engagement with Cambodia to the education and health sectors, but it has also funded democracy promotion activities. Washington has supported country-specific initiatives by the National Democratic Institute, Voice of America, and Radio Free Asia—all now dissolved, crippled, or shuttered inside the country. By comparison, China’s engagement comes with few perceptible political strings attached. The relationship would be envied by any authoritarian regime, as China is a member of both the UN Human Rights Council and the UN Security Council.

In the aftermath of Kem Sokha’s midnight arrest, the Chinese government offered its unequivocal support. “As a good neighbor, friend, partner and brother of Cambodia, the Chinese side has always supported Cambodia in following the development path suited to its national conditions and the Cambodian government’s effort to uphold national security and stability.” This tacit endorsement of the crackdown—and, by extension, the political status quo—served to affirm the more repressive direction of Hun Sen’s government.

The onset of an even harsher form of authoritarianism in Cambodia has been buttressed by the fact that the defense of democracy and human rights is adrift under the Trump administration. Despite the best efforts of career civil servants and diplomats, the rhetorical disconnect between the State Department and the White House has not gone unnoticed in Cambodia.

Like his regional counterparts, namely Najib Razak of Malaysia, Rodrigo Duterte of the Philippines, and Prayuth Chan-o-cha of Thailand, Hun Sen has shown a moral affinity for President Trump. It began during the presidential election campaign, when he offered an endorsement of candidate Trump for his ability to usher in “world peace.” In February, a Cambodian government spokesman, echoing Trump’s rhetoric, warned that certain independent media groups constituted “fake news” and were at risk of being shut down. This has now come to fruition.

The Trump administration is certainly not responsible for every abuse of human rights that occurs around the world. Authoritarian regimes will always have their own reasons for cracking down on critics, regardless of who resides in the White House. But the current administration is abnormal in that the words and deeds of President Trump help solidify the authority, justify the brutality, and reinforce the power of dictators.

While the exact and ultimate consequences of the Trump administration’s haphazard indifference toward the cause of democracy are still largely unknown, the consequences of the crackdown in Cambodia are easier to identify. Besides aiding the ruling party’s “victory” in the forthcoming elections, it is clear that an underlying aim of the recent repression was to prevent a protest-driven “color revolution” from toppling Hun Sen’s regime. The irony, of course, is that eliminating relatively competitive elections also eliminates a known release valve for political discontent under authoritarian rule. In his attempt to avoid a revolution, Hun Sen may in fact be sowing the seeds for future upheaval.

Lee Morgenbesser is an assistant professor at Griffith University’s Griffith Asia Institute in Queensland, Australia. His Twitter account is @LMorgenbesser.