Newcomers made surprising gains after a flawed process, but entrenched incumbents may hang on to the levers of power. 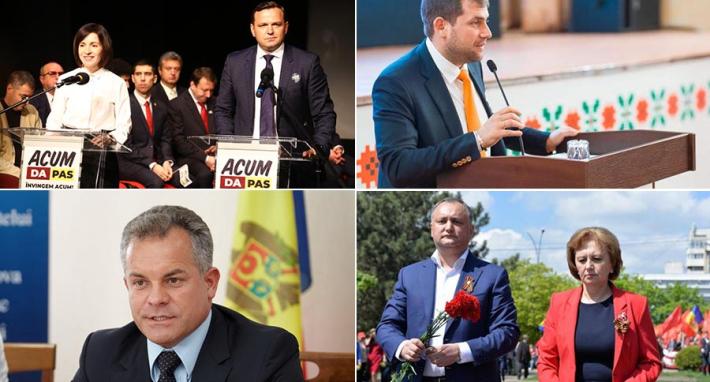 From left to right: Leaders of the ACUM alliance Maia Sandu and Andrei Nastase; Mayor of Orhei and lead of the Shor party Ilan Șor;  Business magnate and chairman of the Democratic Party (PDM) Vladimir Plahotniuc; President Igor Dodon of the Socialist Party (PRSM) with Zinaida Greceanîi. (Photos courtesy of Anticoruptie.md and Moldova.org).

Newcomers made surprising gains after a flawed process, but entrenched incumbents may hang on to the levers of power.

On February 24, Moldovans went to the polls to vote in parliamentary elections. While a number of long-standing members were swept out of office, the preliminary results are inconclusive, with none of the four major parties securing a majority.

The pro-Russian Socialists (PSRM), headed by President Igor Dodon, took about 31 percent of the overall vote, followed by a new reformist bloc, ACUM (“Now”), which took 26 percent. The Democratic Party (PDM), which is dominated by business magnate Vladimir Plahotniuc and has controlled the premiership and government in recent years, placed third with 24 percent. The Shor Party of Ilan Shor, the mayor of Orhei who was implicated in a massive embezzlement scandal, received more than 8 percent.

If these parties are unable to negotiate a viable coalition agreement, or if the final results are not validated, new elections could be called. 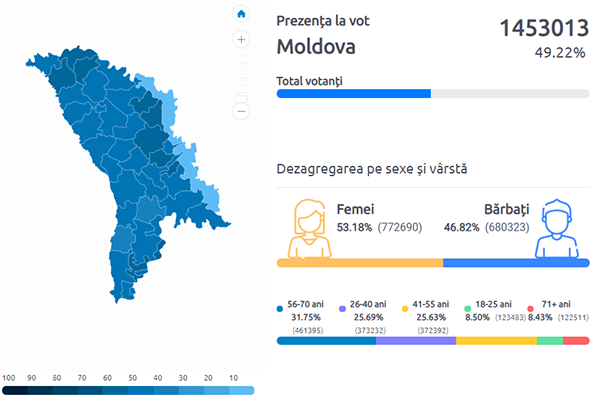 The official results of Moldova’s parliamentary elections from the Central Electoral Commission (CEC).

These were the first parliamentary elections since the voting system was changed in July 2017 from one based on party-list proportional representation to a mixture that includes races in single-member districts. Under the new system, 50 members of Parliament are selected through proportional representation, and 51 are selected through “first past the post” voting in geographical constituencies.

Many in the international community, including the Council of Europe’s Venice Commission, warned that the arrangement could be leveraged by the PSRM and PDM to protect their incumbency against competition from new or smaller parties, despite their ostensible rivalry. While the Socialists present themselves as pro-Russian, and the Democrats project a pro-EU image, the facts are more complicated. Both parties stand to benefit from the suppression of competitors who could threaten not just their political positions, but also the lack of transparency and accountability that has allowed corruption to flourish in Moldova. According to Freedom House’s 2018 Nations in Transit report, these parties exert a powerful political influence over key state institutions, including the judicial system.

In fact, many Moldovans argued that the Supreme Court of Justice’s decision to annul the Chișinău mayoral election last June, based on a dubious technicality, was a possible test run for the parliamentary elections. The June ruling thwarted the victory of reformist candidate Andrei Năstase over a PSRM opponent, suggesting that a similar move could be used to throw out a parliamentary result that did not favor the incumbent parties. The 2018 events contributed to a downgrade for Moldova in Freedom House’s 2019 Freedom in the World assessment.

The preliminary findings of the Organization for Security and Co-operation in Europe (OSCE) observation mission indicated that, despite some irregularities, including allegations of vote buying involving the separatist territory of Transnistria, the “elections were competitive and fundamental rights were generally respected.” However, the preelectoral period featured a number of major problems.

In the lead-up to the elections, ACUM’s leaders, Năstase and Maia Sandu, accused the authorities of poisoning them, citing toxicology reports that showed highly elevated amounts of mercury in their blood. Journalists faced challenges in accessing information of public interest regarding political developments ahead of the elections, and politicized media ownership reduced news consumers’ exposure to diverse viewpoints. Acts of intimidation against journalists remain common in Moldova, including verbal and physical threats and politically motivated legal proceedings.

There was also an unprecedented trolling campaign that unfolded in early February. Facebook removed 168 accounts, 28 pages, and eight Instagram accounts from its platforms after learning that they were engaging in coordinated, inauthentic behavior aimed at misleading the Moldovan public, using doctored photos, divisive political rhetoric, and impersonation. The campaign’s targets included some of Moldova’s leading independent journalism platforms, such as Stop Fals and Anticoruptie.md. Some of this activity was allegedly linked to employees of the Moldovan government—an interesting twist given that such campaigns are typically associated with the regime in Russia. There is clearly a homegrown market for social media manipulation in polarized environments like Moldova.

While public sentiment heading into these elections appeared to be somewhat optimistic according to recent polling, turnout was historically low, with a total of 1,453,013, or a little less than half of eligible voters (49.22 percent), casting ballots.

The route to a stable government remains unclear

ACUM’s performance was better than expected and demonstrated that it had significant public support. Nonetheless, the hung Parliament puts ACUM in a challenging position, since participating in government would mean forming some manner of coalition with the PCRM or the PDM. Sandu has already refused to do so, stating, “We do not negotiate with thieves. We will come up with good initiatives, and if there is anyone with any brains in Parliament, they will support [our initiatives].” As for the Shor Party, it could serve the PDM as a distraction, given its extreme rhetoric and antics, particularly those of Shor himself.

During this period, while there is still a lack of clarity on government formation and the final outcome of the elections, it is important for the United States and the European Union to both commend Moldova for its successes—such as the aspects of the electoral process that it carried out democratically—and hold firm on areas where the country falls short. Political corruption, which some civil society groups say amounts to state capture, remains the primary obstacle to democratic development in Moldova. The international community must actively engage in a principled way with all of those who enter government, regardless of their perceived geopolitical alignments, to ensure that democratic values are recognized and enforced.