Moldovans Settle In for a Standoff with Corruption

Pro-EU governments over the last six years have failed to tackle rampant graft, and after a billion-dollar bank theft, protesters have had enough. 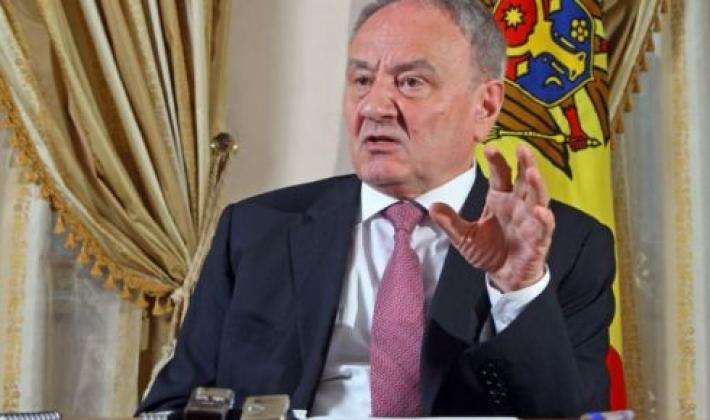 Pro-EU governments over the last six years have failed to tackle rampant graft, and after a billion-dollar bank theft, protesters have had enough. 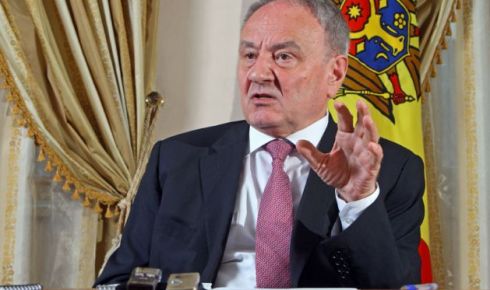 For the past five days, nearly 60,000 people have gathered in Chişinău’s National Square (Piaţa Marii Adunări Naţionale, or PMAN) to protest against pervasive corruption, demand the return of $1 billion in assets that were recently stolen from Moldova’s banking system, and call for the resignation of several senior officials, including President Nicolae Timofti (pictured above). This second round of protests—which are massive for a country of Moldova’s size—follow an earlier effort in May and June, when the civic organization Dignity and Truth mobilized demonstrators to express public dissatisfaction with corruption and the authorities’ inability to meaningfully address it.

This time around, however, there is a greater feeling of permanence, and an “occupy-style” encampment has been established in the center of the capital. It consists of about 80 tents and a display board naming and shaming an array of leaders who should be held to account, including pro-Russian socialists and communists as well as representatives of Moldova’s pro-EU governing coalition.

Protesters, policymakers, civic activists, and others have been making hasty comparisons to Ukraine’s Euromaidan movement of 2013–2014, in which thousands camped out on Kyiv’s Independence Square (Maidan Nezalezhnosti) to protest widespread government corruption and abuse of power, eventually leading to President Viktor Yanukovych’s de facto resignation and the election of a new president and parliament. However, there are important differences between Moldova’s current protests and what became known as Ukraine’s Revolution of Dignity—including the Moldovan demonstrators’ lack of concrete proposals for fulfilling their general demands, and plans for what would come next.

The Shortcomings of the ‘Grape Revolution’

Protesting to transform national governance is by no means a new concept in Moldova. In April 2009, after the incumbent Communist Party “won” over 50 percent of the vote in rigged parliamentary elections, tens of thousands of young people organized via social media, took to the streets of Chişinău in protest, and poured into PMAN. The protests turned violent amid clashes with police, possibly with help from provocateurs, and the authorities blocked mobile-phone signals in an attempt to stymie civic organizing. After nearly a week, then president Vladimir Voronin conceded and announced a vote recount, ultimately resulting in new elections that July and a victory by the pro-EU parties.

In the six years that followed, Moldovan society was certainly not “asleep.” Citizens watched with some hope as the country’s new leadership pursued a path toward European integration, culminating in the signing of an Association Agreement with the EU in June 2014. However, as others have pointed out, the ruling elites also engaged in ugly infighting and failed to address pervasive corruption at the national and local levels, oligarchic control over mass media and the major political parties, and severe economic hardship for much of population. While many Moldovans emigrated to other European countries in search of a better life, those who remained felt increasing dissatisfaction with their leaders’ performance.

The tipping point came in November 2014—a month that featured bitterly contested, highly polarized elections and the disappearance of nearly $1 billion from Moldova’s banks. Public outrage grew over the lack of a meaningful investigation into the “heist of the century.” The system’s tendency to reward rather than punish corruption was grossly illustrated in June 2015, when Ilan Shor, the young entrepreneur who was publicly identified as the main suspect in the bank theft, was elected mayor of Orhei while under house arrest.

The Truth behind ‘Dignity and Truth’

There are even some doubts about the authenticity and motives of Dignity and Truth, the leading force behind both the current protests and those mounted in May and June this year. It was created on February 24, and several well-known journalists, lawyers, and other members of civil society signed on. However, some prominent civil society leaders distanced themselves from the movement when reports emerged that it had political aspirations. Rumor has it that the group is financed by two Moldovan businessmen who previously came into conflict with Vladimir Plahotniuc, arguably the country’s most powerful oligarch and a major figure in the ruling coalition. The movement has also been accused of being aligned with pro-Russian parties, especially given the Socialist Party’s recent statements of support.

However, Andrei Nastase, the coordinator of Dignity and Truth, has denied all of these claims, and underscored that a significant part of the movement is crowdfunded. The organization has defied and dodged any association with liberals, conservatives, communists, socialists, or those who seek union with Romania, among others. It insists that its central purpose is to hold the “mafia state” to account.

While this may be the case, the critical missing elements are a concrete proposal on how to proceed, and a clear plan as to what should happen once complicit and corrupt individuals are removed and punished. A “mafia state,” after all, suggests deeply flawed institutions, not just a few malefactors in positions of power.

On September 6, protesters demanded a meeting with President Timofti, which he denied. Timofti acknowledged that “freedom of expression is a fundamental right,” but refused to resign his post on the grounds that it could create even greater political instability for Moldova. Prime Minister Valeriu Streleţ, who holds the majority of executive powers in Moldova’s constitutional system, offered to meet with the protesters but agreed with Timofti that resignation is not the answer.

Nevertheless, those in power cannot ignore such a massive protest, and at the very least must continue to respect demonstrators’ right to assemble freely and peacefully in PMAN. In addition, the leadership will have to address the one clear demand coming from Dignity and Truth—a complete investigation of the bank heist, the return of stolen funds to Moldova, and the trial and punishment of all those responsible.

The EU and other European entities would be wise to assist and propel this effort in every way possible, as any failure could permanently discredit not just the parties that have been in power for the last six years, but also the goals of European integration and democratic reform that they claim to espouse. A just resolution of the bank case, meanwhile, would go a very long way toward restoring the public’s faith in Moldova’s government and legal system.