The fate of press freedom in the country is closely tied to the success of its democracy. 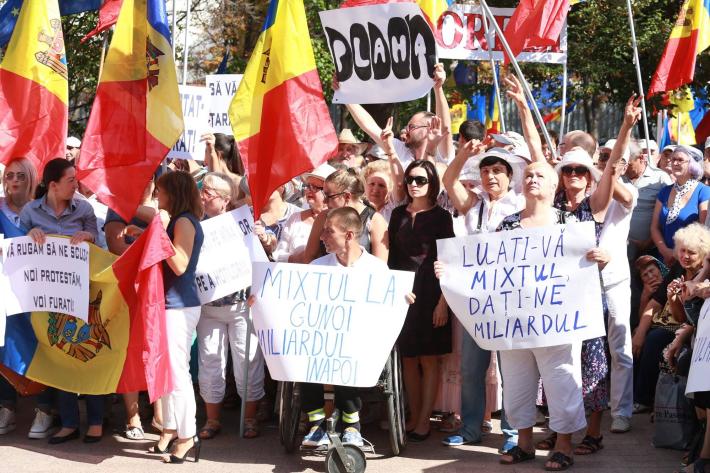 Citizens of Moldova protest against the mixed electoral system in front of the Parliament building.

The fate of press freedom in the country is closely tied to the success of its democracy.

The United States, the European Union, and local civil society groups have worked for years to advance democratic reforms in Moldova, and a key priority in that effort has been the creation of a diverse and independent media sector.

Despite this pressure, however, the country’s media remain trapped by the competing interests of political parties and affiliated business groups. Since Moldova emerged from the Not Free category in Freedom House’s Freedom of the Press report in 2011, its score has barely budged from the lower end of the Partly Free range.

Ownership concentration, especially in the television sector, is one of the greatest obstacles to media independence in Moldova. More than 80 percent of domestic television stations are owned by people affiliated with political parties, and some 70 percent of the market is controlled by Vladimir Plahotniuc, a powerful business magnate and leader of the Democratic Party of Moldova (PDM), which currently holds the prime minister’s office. (Plahotniuc’s chief political rival, President Igor Dodon, formerly of the Socialist Party, is supported in part by Russian state-owned media, which command large audiences in Moldova.)

In 2016, Parliament amended the broadcasting code to set a limit of two media outlets per individual owner, but the rule did not apply retroactively. Moreover, Moldovan media owners quickly found ways to adjust to the new limits: They sold their outlets to family members or created new companies and entities to mask the true owners. In reality, the media ownership landscape has barely changed.

Moldovan media are generally dependent on their owners, rather than diversified commercial advertising, for their funding, which inevitably damages the objectivity of their news content. Even independent outlets have failed to attract investment or develop sustainable income from advertisers, forcing some to rely on grants from foreign donors.

According to a recent report by the Independent Journalism Center, multiple Moldovan television channels present facts selectively, often mixing them with commentary. The report states that the media frequently manipulate public opinion and represent owners’ interests rather than serving the interests of the public.

The public media are also politicized, and while neighboring Ukraine has attempted to transform its state-owned media into genuine public-service broadcasters, discussion of such changes is not even on the table in Moldova.

In September, a group of protesters—led by 2016 presidential runner-up Maia Sandu of the reformist Party of Action and Solidarity (PAS)—marched on the headquarters of the public television station Moldova 1, claiming that the broadcaster was failing to present a diverse range of views in its programming. They called for the station to be depoliticized, and demanded weekly airtime for the extraparliamentary opposition. (PAS, a pro-EU party formed in 2016, did not participate in the most recent parliamentary elections in 2014.) Moldova 1 refused the protesters’ demands, but invited Sandu to a live debate with the speaker of Parliament, Andrian Candu of the PDM.

Hostility to media independence is reflected in politicians’ treatment of journalists. While reporters are not killed or imprisoned in Moldova, they do experience various forms of political pressure, such as denial of access to information and events, or public denunciations by government officials. This leads to self-censorship and the suppression of critical news coverage. In September, photojournalist Constantin Grigoriţă sued the presidential administration for multiple cases in which it obstructed his work. He said he was denied access to several meetings organized by the administration without justification, and argued that the president’s office grants access only to journalists who are not critical of Dodon.

Politicization of both private and public outlets has undermined citizens’ confidence in the media in general: Survey respondents who said they had high trust in the media declined from 60 percent in 2014 to 42 percent in 2016. This trend leaves Moldovan audiences more vulnerable to external disinformation and manipulation, particularly by Russian state-owned outlets that seek to weaken Moldova’s ties to the EU.

A need for renewed pressure

Moldova committed to building an independent and pluralistic media sector when it signed an Association Agreement with the EU in 2014. However, the media segment of the National Action Plan for implementation of the agreement is increasingly outdated and largely applies to the broadcast sector. Problems faced by online and print media, including disinformation campaigns, are left unaddressed. Moldova’s Ministry of Foreign Affairs has announced that the plan is being revised, but critics say the government lacks the political will to make meaningful changes, and that any reforms will remain “on paper.”

Civil society will be crucial to further progress on media independence in the country. The Moldovan Press Council, an all-volunteer organization whose mission is to uphold professional standards and ethics in journalism, has great potential to become a credible point of reference, but lack of understanding of its purpose and the nature of such self-regulatory institutions among other media actors is a notable obstacle.

Moldova stands at a crossroads in its democratic development. Although its political establishment and judicial system remain troubled by corruption and other defects, it has achieved significant success in creating a vibrant civil society sector, with many prominent organizations that are capable of driving policy change and engaging constructively with the government. Now is the time for the media sector to follow suit. If the international and domestic pressure for reform is renewed and remains strong, Moldovan journalists will eventually be able to play their proper role, serving as an independent check on the powerful and informing the public in a free and democratic society.