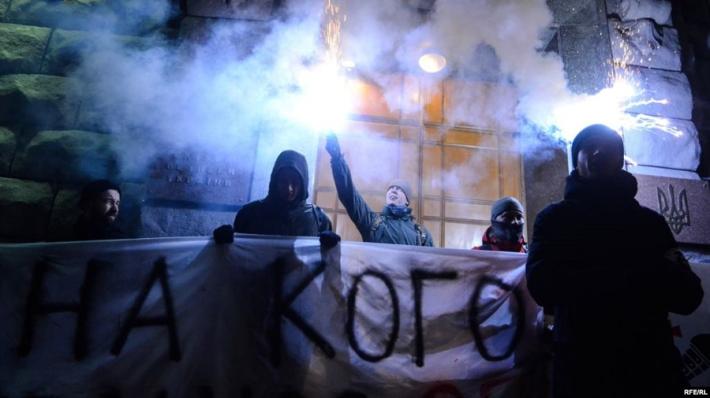 I was speaking the other day to a group of LGBT+ activists and potential civil society allies in Kharkiv, Ukraine’s second largest city, less than an hour’s drive from the Russian border, when a gang of thugs forced their way into the room and declared that they were ending the event. They said they would not tolerate the “deranged and sick ideology” of LGBT+ rights, that “Ukraine is for traditional values,” and that “Kharkiv is a traditional Ukrainian city.”

The event, hosted by Freedom House, was intended to build support in civil society for Kharkiv’s first Pride event—to widen the circle of friends and allies who are not part of the LGBT+ community but are invested in protecting everyone’s rights in Ukraine.

The thugs were decked out in black shirts emblazoned with the Wolfsangel symbol, which is associated with Nazi Germany. Of course, my first reaction was to be frightened, and as they took over our space in a Kharkiv hotel, chosen because it had the best security in town, I am sure everyone in our group had similar thoughts: Is this going to get violent? What should I do? But I quickly realized that these members of “Freikorps” and “Tradition and Order”—groups with scary far-right names that are very active on social media—were kids. That should not have reassured me, as violence, especially in Ukraine, is unpredictable and not confined to any particular age group. Nevertheless, it did. These people were mainly intent on filling our room with their bluster and preventing us from meeting.

This is an increasingly common occurrence among civil society groups in Ukraine. Our partners from a local feminist group called Sfera told us that it had happened to them at least 10 times in the past year. Freedom House and a range of other partners across the country are tracking the incidents and working to build a unified response.

However, until the incident in question, on May 17, far-right extremist groups have generally been successful in breaking up civil society meetings. Venue managers see that the police are unlikely to take meaningful action, that the thugs are ready to fight, and that damage to people and property is likely. They pull the plug, and everyone goes home. The extremists target LGBT+ people to be sure, but also feminists, journalists, anticorruption activists, and religious and ethnic minority communities. For Ukrainian democracy to survive, this has to stop.

In our case in Kharkiv, we had created a safe space for LGBT+ people to convince possibly skeptical civil society actors that if they wanted to defend human rights in Ukraine, it was important for groups not used to supporting one another to join forces. We were determined not to let the thugs win.

A few things made this incident stand apart from the others. We had reached out to the head of the national police and the human rights ombudsperson before traveling to Kharkiv. This helped us organize a meeting on the morning of our event with the police and the organizers of Kharkiv Pride to discuss security for the march and associated activities. Until then, organizers were unable to get this kind of meeting. The contact may have helped, because eventually, after we had spent 30 minutes sitting in a small room with 10 neo-Nazis, the police did arrive at the hotel. We couldn’t help wondering why and how the hotel’s security personnel had allowed the thugs to enter. But the hotel did not cancel the event, and while the police did not arrest or remove the thugs, they did keep the situation from escalating. No one was hurt. Hotel staff assisted with an elaborate ruse to make the thugs believe we had left, leading us through service hallways and back into the meeting room, where we completed our event.

This was a victory for the organizers and participants, the vast majority of whom stayed on through the hours that it took to work things out. When the meeting originally began, the room was a mix of organizers and audience, of foreigners and locals, of people hoping to find common cause. When we departed that night, we were friends, having shared a disturbing but ultimately positive experience. The same is likely true for at least some of the hotel staff and police officers. No one needed to be convinced of the need to resist extremists intent on closing down Ukraine’s civic space. We knew in our bones why it was important. If the thugs or their puppeteers had hoped to prevent Kharkiv’s LGBT+ community from building allies in civil society and beyond, they failed.

Still, it is clear that more work needs to be done. In a grim postscript to the story, an event organized on May 27 by a Roma rights group in Kyiv, in which Freedom House’s Ukraine staff participated, was broken up by the far-right group “Unknown Patriot.”