Myanmar’s dramatic election results have raised hopes for further progress toward a democratic society, but there are many obstacles to peace, social inclusion, and economic opportunity. 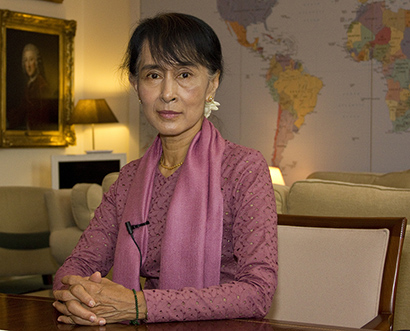 Myanmar’s dramatic election results have raised hopes for further progress toward a democratic society, but there are many obstacles to peace, social inclusion, and economic opportunity.

Myanmar’s November 8 elections were, by any measure, historic. After a sweeping victory by the opposition National League for Democracy (NLD), the country will likely undergo a transfer of power in the coming months, during which nearly all sitting ministers, the parliament speaker, and the president will be replaced. That over 6,000 candidates from 93 political parties participated in the relatively free elections represents significant progress for Myanmar given the country’s history of single-party or direct military rule.

The larger question, though, is whether the results portend a meaningful transformation for Myanmar that will bring about a more peaceful and inclusive society, and an economic system that benefits many rather than the very few.

The impediments to such a transformation are numerous and deep-rooted. The new government will be handicapped by the military’s control of three key ministries and a constitutionally mandated 25 percent voting bloc in the parliament, which effectively provides the generals with a veto on constitutional reform.

Efforts to press for more equitable policies on labor rights and land use will face resistance from a small but hugely powerful business elite that controls virtually all industries, and an entrenched culture of corruption that sustains them. This group of “cronies,” as they are called, have profited enormously from close ties to the military and political leadership as well as from persistent civil conflict in resource-rich regions of the country that has made it easier to exploit local ethnic minority populations. (An important new report by Global Witness on the $31 billion jade industry describes this exploitation in gruesome detail.)

Making social cohesion even more difficult, an increasingly influential group of extremist monks is fomenting hostility toward all who do not follow Myanmar’s conservative form of Theravada Buddhism, and they appear to have gained traction in Burmese politics and society. A legal analysis that supports claims of genocide against the largely Muslim Rohingya minority was flatly rejected by the incumbent government, and NLD leader Aung San Suu Kyi warned against “exaggerating” the problems faced by the Rohingya.

The NLD excluded all Muslims from its candidate list and publicly ignored the plight of the Rohingya during the election period. While the party’s supporters celebrated their victory in the streets of Yangon last week, hundreds of thousands of ethnic Rohingya remained effectively imprisoned in displaced-person camps without basic human necessities, much less the right to vote. Indeed, Muslims, who represent roughly 10 percent of Myanmar’s population, will not have a single member of their faith to represent them in the new parliament.

The tenuous relationship between the military and the NLD may be the key impediment to further change, particularly regarding the ongoing civil conflict. The NLD’s ability to step into a leadership role in ceasefire negotiations will be crucial. Early signs seem to indicate that for their part, the generals have no intention of committing to meaningful peace with ethnic minority militias. As most of the country went to the polls last week, more than 100,000 ethnic Kachin people remained displaced by conflict, as the military continued its assault on the region’s villages despite a so-called National Ceasefire Agreement signed in October. Since President Thein Sein made a nationwide cease-fire a priority in 2011, the military has undertaken one of the most violent campaigns in recent Myanmar history in Northern Shan State and Kachin State. Just two days after the elections, the armed forces launched airstrikes in Northern Shan State, illustrating just how far the country is from real peace.

Although the scope of the NLD’s election victory has been cheered internationally and appeared to surprise the government, a more sober analysis must note that such elections—first held amid an NLD boycott in 2010—were a calculated step in the military’s “Roadmap to Democracy” (step 5, to be exact), which was designed to build an environment more attractive to foreign investment and enlarge an economy that the military and its cronies would still dominate.

The fact that the roadmap was drafted by the military and announced by the notorious general Khin Nyunt, then the prime minister, does not mean the plan has been without real benefits for Myanmar’s people, but it does offer grounds for suspicion. Reactions to the election results from representatives of the ruling, military-backed Union Solidarity and Development Party (USDP) also provide some fodder for doubt. U.S.-blacklisted businessman and USDP candidate Khine Shwe said in response to his loss, “I believe that after Daw Aung San Suu Kyi’s government begins, there will be many more foreign direct investors. So I need to refocus on my businesses.”

There is of course much to be optimistic about. The political transition could create new space for civil society to shine a light into corrupt industries; a new opportunity to build strong governmental institutions that can combat environmental degradation, curb exploitative labor practices, and protect minority rights; and new mechanisms for citizens to participate in the lawmaking process.

Nonetheless, progress toward a more peaceful and inclusive Myanmar will be challenging. In addition to the obstacles already discussed, the new government will face the pressure of high expectations—from the international business, human rights, and diplomatic communities, but most importantly from the Burmese people. The 80 percent turnout on election day is a testament to their desire to have their voices heard, and to achieve meaningful peace and further political reform. But to build a more inclusive and truly democratic society, the new leadership will also have to serve the millions who were denied the right to vote.