The administration’s first moves have raised hopes that the corruption and neglect of the Zuma era are truly coming to an end. 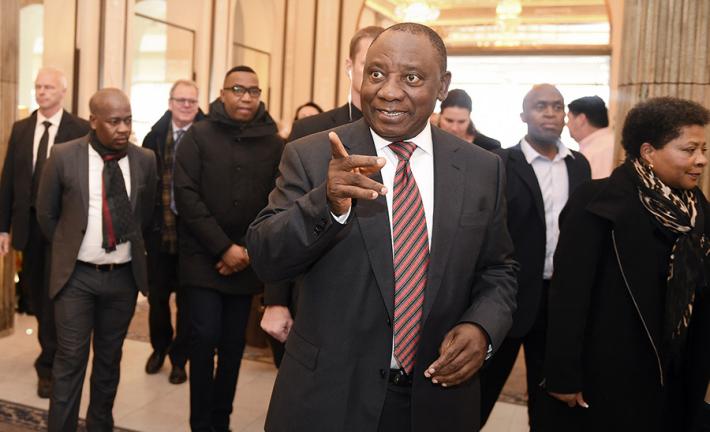 President Cyril Ramaphosa. Credit: The Presidency of the Republic of South Africa / Flickr.

The administration’s first moves have raised hopes that the corruption and neglect of the Zuma era are truly coming to an end.

With Jacob Zuma gone, a new South African president faces the task of repairing the damage done to the country’s progress and prestige over the last decade. That president is Cyril Ramaphosa.

One of the iconic images of the 1990s is that of Nelson Mandela, just released from prison, addressing a heaving multitude on the Cape Town Parade. Holding the microphone, but barely able to keep his footing, is Ramaphosa, then the chair of the National Reception Committee established to prepare for Mandela’s release, and general secretary of the National Union of Mineworkers. By mid-1991, roughly a year and a half later, Ramaphosa had risen to become secretary general of the newly legalized African National Congress (ANC).

He was left out of the first post-apartheid cabinet, but became chairperson of the Constitutional Assembly, responsible for drafting the present South African constitution, which was signed into force in December 1996.

In February 2018, after years in business and a slow return to public life that included four years as Zuma’s deputy, Ramaphosa became president of South Africa. The ANC had elected him party president in December 2017 and subsequently pushed Zuma to resign before the end of his term, allowing Ramaphosa to be elected by the National Assembly to a still-warm seat rather than waiting for the national elections of 2019.

More secure in the state presidency than in the party—where a wafer-thin majority and a national executive body balanced between his supporters and those who had backed Zuma and his cronies continue to limit his room for maneuver—Ramaphosa has taken an energetic approach to reestablishing a government based on the letter and spirit of the constitution.

He has assembled a strong financial team led by Nhlanhla Nene as finance minister and another former finance minister, Pravin Gordhan, as minister of state-owned enterprises. There has been a rapid effort to stabilize the public utilities, especially the electricity utility Eskom; replace the leadership of the South African Revenue Service; and roll back the so-called state capture project—an attempt by particular party and business interests under Zuma to reshape the state to benefit themselves, since exposed by civil society, investigative journalists, and the former Public Protector, or ombudsman.

The state capture project was abetted by political interference in the appointment and work of the prosecutorial and policing services. A new minister of police and national police commissioner have now been appointed, and their priority crimes unit is taking an active interest in the allegedly corrupt dealings of two provincial premiers’ offices, having made arrests in the Estina Dairy case, a high-profile scam implicating the businesses of the Gupta family. This same family has been found—through a trove of leaked emails—to be central to the broader state capture project; they are accused, among other things, of influencing the hiring and firing of cabinet ministers. The new push for institutional action in the security sector, together with a judicial directive obtained by civil society and opposition parties, has resulted in the reinstatement of charges against Zuma himself.

These charges relate to corrupt practices during Zuma’s tenure as a provincial minister of economic development in the 1990s and implicate Thint, a local subsidiary of the French arms company Thales. Zuma will appear in court in that case in early April.

South Africa has a hybrid system of presidential government. Once elected by the parliament, the president appoints a cabinet from among parliament members, and they remain accountable to the legislature, but the president occupies an executive position outside of parliament, with only occasional exposure to questioning by its members. Ramaphosa’s election followed the very reluctant resignation of Zuma after internal ANC party consultations and, finally, the message that the party’s parliamentary caucus would support a vote of no confidence brought by the Economic Freedom Fighters (EFF), the second-largest opposition party, led by firebrand and former Zuma protégé Julius Malema. Zuma’s ouster demonstrated that, while the constitutional, legal, and party systems of South Africa operate slowly, they do work.

And in the hands of an astute, constitutionally committed, and effective president, they could continue to work to roll back the damage of the Zuma years.

That damage includes an erosion of human rights inside South Africa, with serious setbacks for personal safety and dignity and the rights of women and children, as well as regression with regard to the rights to education and health care. Corruption was hidden with a project of disinformation that has heightened racial tensions and persuaded the poor that their position in society is solely a result of apartheid-entrenched white privilege and land ownership rather than policy implementation failures over the last two decades.

Justifiable hunger for land, and less justifiable white fear of land dispossession, have made the land reform process extremely heated, with an inquiry into changes to the constitution’s “right to property” clause at the center of the controversy. Ramaphosa is, however, trying to gain control of the debate, saying to traditional leaders, as he has said to others, “As part of the measures to accelerate land redistribution, the 54th National Conference of the ANC resolved that where appropriate and justifiable, land will be expropriated without compensation. The program of land reform must have clear targets and timeframes, be guided by sound legal and economic principles, and must contribute to the country’s overall job creation and investment objectives.”

Even parochial concerns seem to be couched in a more internationalist worldview, with the president making a rapid-fire round of visits to neighboring states, devoting attention to international economic obligations, and selecting the Department of International Relations and Cooperation as the first South African department to receive a presidential visit. These are positive signs that South Africa is going to return to its previous prominence within the community of nations. Less clear is whether that positioning is going to remain state-centric or be more rights-based. To date the evidence is inconclusive. But Ramaphosa’s views on human rights abuses inside South Africa suggest that there is an opportunity to amplify South Africa’s voice on the global stage, if encouraged by organized civil society.

In a less-discussed portion of his State of the Nation address in February, the closest equivalent to an inauguration event and an indication of the importance of the legislature to this new president, Ramaphosa spoke of two recent stains on the human rights record of South Africa: the 2012 mass shooting by police of striking workers at a mine in Marikana that included Ramaphosa on its board of directors, and the fatal neglect of dozens of patients at psychiatric facilities in Gauteng Province. “Notwithstanding the findings of the Farlam Commission on my responsibility for the events that unfolded [which exonerated him from blame for the miners’ deaths], I am determined to play whatever role I can play in the process of healing and atonement.… Alongside Marikana, the Life Esidemeni tragedy stands out as an instance of the most appalling dereliction by the state of its duty to the people.”

South Africans seem to be responding positively to his State of the Nation call of “send me/thuma mina,” which suggests a significant shift away from a service-delivery state to a form of governance based on civic agency, and a rejection of the elite capture of resources. Members of parliament were told, “The most important people in this country are not those who walk the red carpet in parliament, but those who spend their nights on the benches outside its gates.”

After almost a decade in the wilderness, South Africa is struggling to rediscover its core constitutional values and to cleanse itself from the aberration that was the Zuma presidency.