No More Excuses for Eritrea

Now that peace with Ethiopia is official, the one-party regime must give democracy its due. 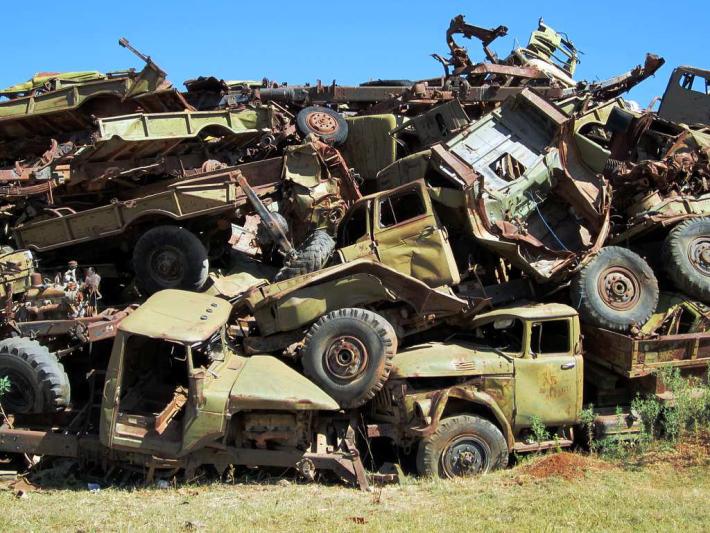 Now that peace with Ethiopia is official, the one-party regime must give democracy its due.

On July 9, Ethiopian prime minister Abiy Ahmed and Eritrean president Isaias Afwerki signed a peace agreement, ending the “state of war” that had persisted between their countries since a 1998–2000 border conflict. The pact was the latest in a parade of positive developments coming out of Addis Ababa, where cautious optimism about Abiy’s reformist government has solidified into realistic expectations of democratic progress in Ethiopia.

But the peace accord is also an opportunity to turn international attention toward Eritrea and push for the full implementation of its 1997 constitution, including long-overdue national elections.

Eritrea received a score of just 3 on a 100-point scale in Freedom in the World 2018, leaving it tied with North Korea for the fourth-worst score in the world and a full 15 points lower than Ethiopia. Freedom House has classified Eritrea as Not Free for nearly the entire period since it gained independence from Ethiopia in 1993.

The Eritrean government controls virtually all aspects of life within its borders. The rule of law and due process are absent. Freedoms of assembly, association, and expression are not recognized. The government shut down all independent media in 2001. A commission of inquiry and a special rapporteur for the UN Human Rights Council have found that the regime’s human rights violations—which include enforced disappearances, torture, rape, murder, and arbitrary imprisonment—amount to crimes against humanity.

One of the most of devastating findings of the UN investigators is that Eritrea’s onerous system of compulsory military service can be classified as enslavement, another crime against humanity. Most able-bodied men and women in Eritrea are forced to perform national service, which often lasts for the duration of a person’s working life and commonly entails sexual violence, torture, and other harsh conditions.

This dire situation is the driving force behind a sustained outflow of refugees from the country. Almost 300,000 Eritrean refugees were living in Sudan and Ethiopia as of December 2017, and many travel much farther, accounting for a disproportionate share of those seeking asylum in Europe. In 2017 alone, the European Union, plus Norway and Switzerland, received nearly 30,000 asylum applications from Eritreans, making the country one of the top 10 points of origin for asylum seekers that year.

Eritrea’s authoritarian leader, Isaias Afwerki, has been in power since independence, when he was chosen by an unelected transitional assembly to serve as president until elections could be held under a new constitution. The government ratified a new constitution in 1997, but it has never been implemented, and Isaias continues to rule without a popular mandate. The president’s party, the People’s Front for Democracy and Justice, is the only legal political party, meaning even the occasional local or regional elections do not offer voters a genuine choice.

Isaias’s government has offered a long series of excuses to explain its continued failure to implement the 1997 constitution and hold elections, often citing the ongoing tensions with Ethiopia:

2000: “We need to eliminate official corruption, foster a culture of accountability, and cultivate the values and institutions for enduring democracy and constitutionality. We have made remarkable strides towards achieving these goals and aspirations, although the current conflict has affected the pace of the progress underway. But even in the best of circumstances, we recognize that these aims cannot be achieved in a short haul.”
—President Isaias

2001: “The peace process is moving ahead, albeit slowly, and elections cannot be the priority…. For the government to focus on elections at the cost of solving the border and refugee problems is clearly an inversion of priorities.”
—Temedhin Temariam, deputy ambassador to Kenya

2004: “The war created obstacles and in some aspects did not enable us to move at the pace we would have wanted to move. Now there is relative peace and even in the last two years there has been a lot of progress in terms of elections for local government. This time round there will be elections for regional assemblies etc. So wherever there is an opportunity, the government embarks on this process. But at the end of the day, survival is paramount. It all depends on whether we’ll be allowed to live in peace or not. And if we have to postpone certain issues, then they will be postponed.”
—Yemane Gebremeskel, director of the Office of the President of Eritrea

2007: “[Leadership change] can’t happen under abnormal circumstances. Unfortunately, we have entered into a situation we call abnormal because of external interferences that are blocking our progress.”
—President Isaias

March 2018: “The costly war with Ethiopia as well as dire conditions of perennial belligerency that ensued in its aftermath has thus adversely affected the tempo and pace of the process. Elections (except local and regional levels) were consequently kept on hold as priorities changed and the country had to grapple, first and foremost, with existential issues of preserving its sovereignty and territorial integrity.”
—Ministry of Foreign Affairs

These arguments have never been credible, but they are even more flimsy now that the war is formally over and relations with Ethiopia are normalizing. The Ethiopian and Eritrean leaders have agreed on concrete steps to bring their countries together: They are establishing embassies, reopening their ports and borders, resuming direct flights, and reestablishing telecommunications links.

The international community—including human rights and democracy advocates and governments with influence over the regime in Asmara—should focus their attention on Eritrea at this critical moment. Isaias has lost his main excuse for postponing national elections and holding his people in perpetual servitude, ushering in a period of great uncertainty.

If he chooses further oppression over democratic progress, he risks a head-on confrontation with Eritrean citizens, whose expectations have been raised by the remarkable rapprochement with Ethiopia. Peace also provides Eritrea with new economic opportunities, but it cannot take full advantage if it remains a militarized society whose working-age men and women are eager to flee abroad.