A review of the forces at work in Crimea, and why the international community must keep up its pressure on Moscow. 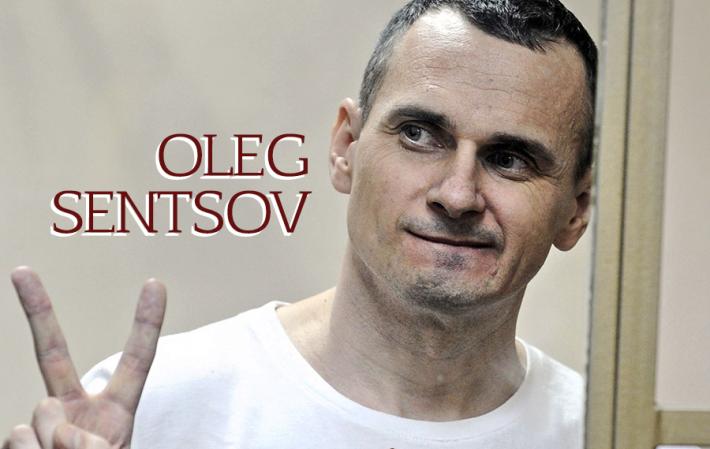 A review of the forces at work in Crimea, and why the international community must keep up its pressure on Moscow.

In late February 2014, after the uprising known as the Revolution of Dignity prompted authoritarian president Viktor Yanukovych to flee Ukraine, Russian armed forces—supported by proxy paramilitary groups calling themselves “self-defense forces”—invaded Ukraine’s Crimean Peninsula in violation of the prohibition of the use of force enshrined in the Charter of the United Nations.

On March 16, 2014, the occupation authorities held what was widely considered an illegal and illegitimate referendum on the annexation of Crimea by Russia. On March 18, self-proclaimed representatives of Crimea who had direct connections to the Kremlin signed an agreement with Russian president Vladimir Putin to begin Crimea’s integration into the Russian Federation. While Ukraine, the European Union, the United States, and a vast majority of other members of the international community have refused to recognize the legality of the referendum and subsequent annexation, Crimea remains under Russian occupation and de facto control.

Freedom House has assessed Crimea separately from Ukraine and Russia in its annual Freedom in the World report since the Russian occupation began in 2014 in order to capture the distinctive conditions on the peninsula, designating it each year as Not Free. The low ratings for political rights and civil liberties reflect the fact that residents who voice dissent or try to exercise their basic rights are subject to harsh repression by the authorities. Indeed, Crimea’s total score is among the worst in the entire Eurasia region, falling significantly below that of the Russian Federation itself.

While the Russian occupation affects many aspects of economic, social, cultural, and political life in Crimea, it poses a particular threat to certain targeted groups.

Political and cultural activists: Activists who speak out in defense of Crimeans’ fundamental rights frequently face arrests, searches, enforced disappearances, involuntary psychiatric treatment, and show trials in Russian-controlled courts. One prominent example is film director Oleg Sentsov, who was sentenced to 20 years in a high-security penal colony in Russia on spurious charges of terrorism. Sentsov has been on hunger strike for over 100 days to protest his imprisonment and to demand the release of 70 Ukrainian political prisoners held on Russian soil, including activists Volodymyr Balukh and Oleksandr Kolchenko. While the campaign has been successful in raising public awareness, the Russian authorities have ignored it. 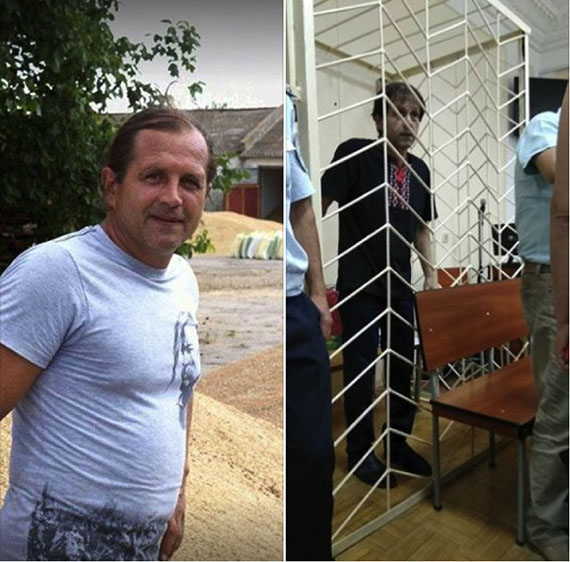 Volodymyr Balukh before (left) and after (right) 96 days of a hunger strike that he described as a manifestation of his personal contempt for the occupation regime. Balukh was sentenced to three years and seven months in prison on trumped-up changes of weapons and explosives possession.

Crimean Tatars: The Crimean Tatars are no strangers to repression from Moscow. In May 1944, their entire population was forcibly deported from the peninsula after midnight raids ordered directly by Joseph Stalin, based on dubious accusations of Nazi collaboration. They were not allowed to return to their homeland until 1989. Many Crimean Tatars feel that this tragedy is now being revisited in familiar, frightening ways. In September 2016, Russia’s Supreme Court banned the Mejlis, the Crimean Tatars’ representative body, and declared it an extremist organization. Crimean Tatars have been disproportionately subjected to arrests and enforced disappearances since 2014. One of the most recent and high-profile cases is that of Server Mustafayev, an activist and community leader who was arrested on the 74th anniversary of the deportation. Recognized by numerous international organizations as a human rights defender, he faces persecution because of his religious beliefs and false claims that he is affiliated with the Islamist group Hizb ut-Tahrir, which is banned in Russia (though not in Ukraine). 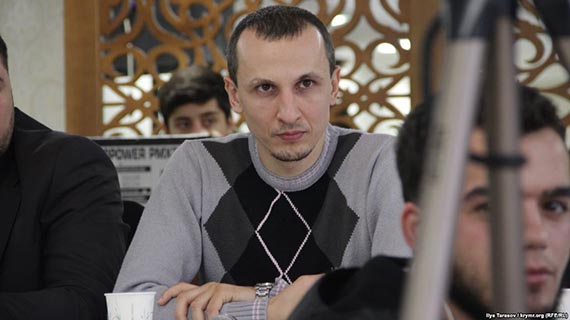 Crimean Tatar activist Server Mustafayev, who was arrested on May 18, 2018. (http://islam.in.ua/ru/server-mustafaev)

Independent journalists: The media landscape in Crimea has changed dramatically under Russian rule. Broadcasts from Ukrainian television channels have been replaced with Russian state-controlled channels. Local independent media, including Crimean Tatar platforms such as ATR, have been virtually eradicated from the peninsula. The independent journalists who remain now operate informally as bloggers, given that they cannot register or get accreditation for their work. They frequently face persecution, as was the case with Nariman Memedeminov, a Facebook blogger who was arrested by Russia’s Federal Security Service (FSB) in March for allegedly sharing “extremist statements” in a YouTube video recorded almost five years ago. Memedeminov is being held in a psychiatric facility, a tactic commonly used by the FSB.

Security agents cordon off the home of blogger and activist Nariman Memedeminov prior to his arrest in March 2018.

Defense attorneys: The FSB frequently persecutes lawyers who are willing to defend the rights of jailed Crimean activists. In 2017, three leading attorneys—Emil Kurbedinov, Nikolay Polozov, and Edem Semedlyayev—were detained by a federal police unit focused on combating “extremism.” The lawyers’ homes and offices were also raided, and authorities confiscated equipment necessary for their legal work. Kurbedinov, who is a Crimean Tatar, was charged with distributing “extremist materials.”

The new normal in Crimea includes street surveillance by suspicious-looking men with video cameras, “prophylactic conversations” meant to intimidate active citizens, Kafkaesque criminal cases, specious claims of extremism and terrorism, and pressure against vulnerable members of society to politically support the Russian occupation. While it is clear that Putin sits at the top of this oppressive machine, who are the functionaries carrying out his cynical strategy?

FSB: The Federal Security Service is the Kremlin’s main tool for suppressing dissent in Crimea. Bolstered by staff and resources brought in from Russia, the FSB systematically tracks, intimidates, and persecutes people who are perceived to resist or undermine the Russian annexation. Lieutenant General Viktor Palagin, known for his crackdown on Muslims and civic activists in the Russian region of Bashkortostan, was appointed to head the FSB in Crimea in 2014 and reports directly to the service’s chief, Aleksandr Bortnikov, in Moscow. After his appointment, Palagin launched a persecutory campaign in an apparent effort to meet arrest quotas.

Agents constantly monitor residents’ communications with one another and with people outside the peninsula, collecting data that can be used against dissidents. FSB forces also dominate the streets and neighborhoods of Crimea. It is not uncommon for community gatherings to be recorded by unidentified men seen walking up and down quiet lanes with video cameras. Local residents receive “invitations” to unofficial interrogations aimed at intimidation and information gathering. For civic activists, journalists, and other potential targets in Crimea, making it to 8 a.m. without a visit from the FSB is a relief, as the agency frequently conducts its politically motivated raids between 6 and 8 a.m. 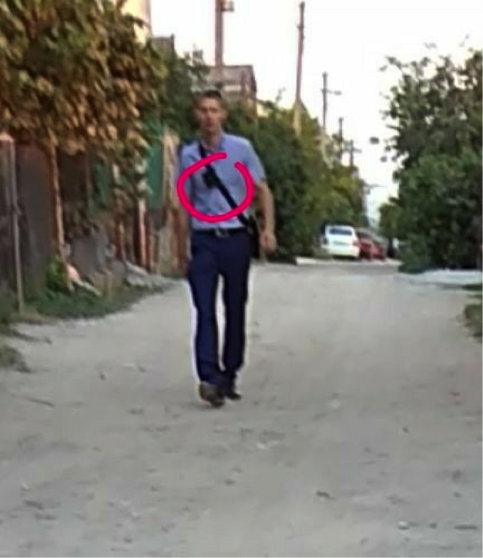 This video by a civic activist in Crimea shows a suspicious man walking down a residential street with a camera affixed to the strap of his bag, presumably conducting surveillance.

Prosecutors and courts: In today’s Crimea, where the rule of law is virtually nonexistent, there is little hope of fair treatment by the justice system. After Sentsov’s arrest by the FSB in 2014, Natalya Poklonskaya, who was appointed chief prosecutor of Crimea by Putin, insisted in court that the film director be imprisoned because he posed a serious danger to society. Sentsov was later brought to Rostov, a city in southern Russia, to be tried by a military court. Such courts are used to prosecute individuals charged with extremism or terrorism offenses, a frequent occurrence in politically motivated cases, and they put defendants at a significant disadvantage. Poklonskaya, who later won a seat in Russia’s parliament representing occupied Crimea, was also instrumental in the dissolution and banning of the Crimean Tatar Mejlis and the persecution of several of the organization’s leaders.

Allegations of participation in unsanctioned public events are also commonly used to persecute active citizens in Crimea, and can result in stiff fines and sentences of community service. In one day in December 2017, the de facto authorities held at least 55 hearings scattered across Crimea for defendants involved in peaceful protests, in a blatant effort to deny them representation by the few attorneys willing to take on such cases.

A report by Ukrainian news outlet Hromadske TV about persecution by the military court in Rostov, Russia.

Public institutions in Crimea: Nearly all public institutions in Crimea are used to force compliance with Russian rule, including among the most vulnerable members of society. Russian leaders and international observers saw the Russian presidential election of March 2018 as an opportunity to consolidate the Kremlin’s authority in Crimea, and government officials pulled out all the stops to boost voter turnout. In the lead-up to the election, officials at public schools, hospitals, retirement homes, and other state facilities apparently pressured staff, employees’ families, retirement home residents, hospital patients, and others to participate in the election and vote for Putin. Those who refused were reportedly threatened with dismissal or termination of medical treatment. Much the same was reported in the lead-up to Russia’s parliamentary elections in 2016, which were also held in Crimea. 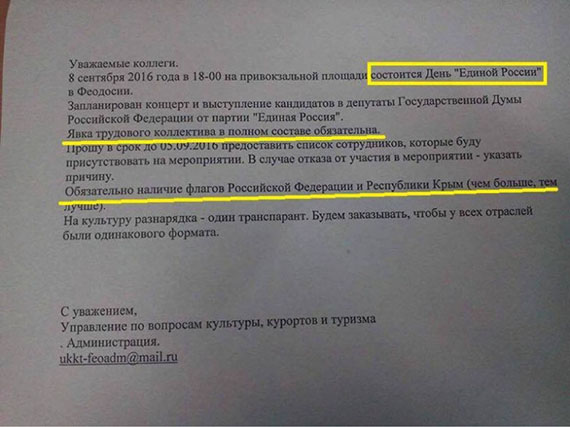 The local government in the Crimean city of Feodosiya sent this letter stating that “participation of the entire staff is mandatory” in a rally to support Putin’s United Russia party ahead of the 2016 parliamentary elections.

The international community responds—but for how long?

The international community has responded to Russia’s occupation of Crimea with condemnation and extensive sanctions against the individuals, companies, and institutions involved. The broad and ongoing support for sanctions among developed democracies signals their opposition to Russia’s actions and their determination to impose an economic penalty until Moscow reverses course.

Yet despite evidence that the sanctions have been painful, contributing to economic decline, the devaluation of the Russian currency, and the depletion of Russia’s Reserve Fund, Russian policy on Crimea has remained unchanged, and even hardened. Many political prisoners from Crimea still sit in Russian prisons, while repressive measures against broad swaths of the peninsula’s population continue to be implemented. 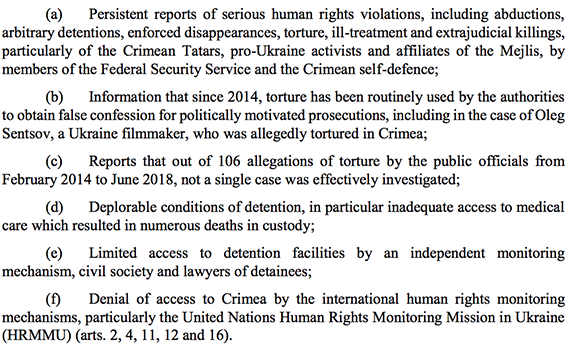 Reports such as this, from the UN’s Committee against Torture in 2018, are essential to maintaining a record of Russian abuses in Crimea.

While Russia’s policy toward Crimea has not budged, it is essential to maintain international solidarity on the issue. The United States, EU countries, and likeminded democracies must continue to use sanctions and other available means to make it clear that Russia’s illegal seizure of territory and repression of the local population—in violation of its own international commitments—are unacceptable in the 21st century.

The international community must also regularly highlight the overall decline in respect for human rights in Crimea, for example through statements and public hearings about the growing cadre of political prisoners in Russian custody. International entities such as the United Nations, the Organization for Security and Co-operation in Europe, and the Council of Europe should collaborate with member states to monitor, document, and highlight human rights abuses, crimes against humanity, and other violations taking place in Crimea. International demands for access to the peninsula to report accurately on the state of human rights there must continue until it is granted.

These efforts are important not just because they maintain international norms and may eventually contribute to positive outcomes, but also because they send a message to those targeted for repression and suffering from its consequences, such as Oleg Sentsov, that they have not been forgotten.