Iraqi civil society organizations and international NGOs encouraged the Holy See to use Pope Francis' visit to Iraq as an opportunity to promote peace and tolerance by bringing together ethno-religious communities and inspiring collective action to prevent further atrocities. 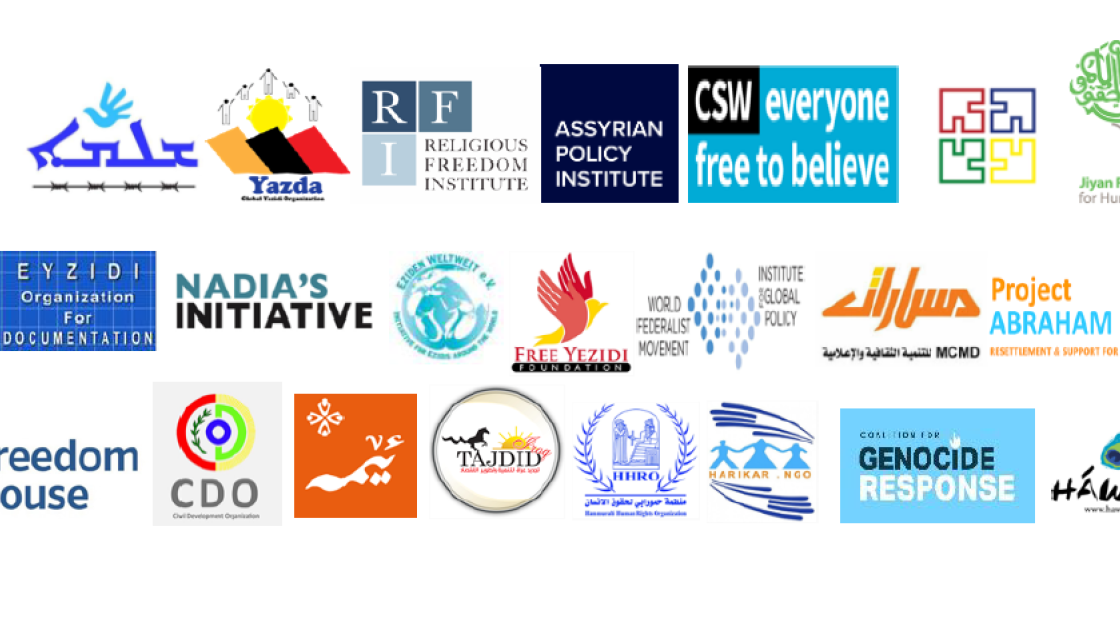 As members of Iraqi civil society and international NGOs, we welcome the apostolic visit by His Holiness Pope Francis to Iraq in March 2021. At this critical moment in the country’s history, the visit represents an important opportunity to promote peace and tolerance by bringing together ethno-religious communities and inspiring collective action to prevent further atrocities of the kind that has caused so much suffering for generations.

Over many centuries the rich tapestry of ethno-religious communities in the region has been woven in largely peaceful conditions, but in more recent times minority groups have faced increasing levels of persecution and violent attacks based on religious beliefs. Ongoing genocides have forced communities to flee their ancestral homelands, unravelling the ties that bind people together in this cradle of civilisation.

The misuse of Sharia Law led to the institutionalized marginalization of non-Muslim minorities in Iraq, exacerbated by Saddam Hussein’s attempts to change the demography of the Iraqi state. The 2003 US-led intervention severely destabilized inter-communal relations, resulting in state collapse, sectarian warfare, and the proliferation of extremist ideologies and armed groups. The Christian population has been reduced to a mere 300,000 today. Other minority communities such as Yazidis, Sabean-Mandaeans, Turkmen, Kak’ais, and Shabaks have faced existential threats in recent years.

From August 2014, the terrorist group Da’esh, also known as the Islamic State of Iraq and Syria (ISIS), exploited the lack of religious freedoms to launch a genocidal campaign against ethno-religious minorities in Iraq. The targeted violence sought to erase the presence of religious minorities in Iraq altogether, and particularly of the Yazidis, decried by ISIS as devil-worshippers. ISIS executed those who refused religious conversion, and destroyed countless shrines, churches, temples, and other cultural sites.

The threat of future atrocities from Da’esh remains clear and present despite the terrorist group’s territorial defeat. We continue to see hate speech against minorities promulgated by extremist clerics across Iraq, and intolerance remains deep-rooted because of a lack of education on other religions and human rights. Recent demographic changes in the Nineveh plains have been accompanied by the increased presence of militia groups in the region. The inadequacy of basic services and infrastructure alongside the ongoing security threat leaves communities with a sense of hopelessness and despair.

We welcome the efforts already taken to safeguard religious freedom in Iraq, such as the Interfaith Statement on the Victims of ISIL endorsed by religious leaders from the Christian, Sunni, Shia, and Yazidi communities, and supported by UNITAD and the UN Office on Genocide Prevention. However, without justice and accountability for past atrocities, religious communities will continue to face persecution and the threat of repeated violence.

The visit of His Holiness Pope Francis to Iraq is an ideal opportunity to promote cooperation and unity of purpose among the Government of Iraq, the Kurdish Regional Government, religious leaders, and the wider international community in order to comprehensively address the needs of affected communities. We recommend that these stakeholders take the following steps:

Iraq: Open Letter Calls on Leaders to Keep Internet Open During and After Elections