Opportunities and Roadblocks Ahead in Moldova

In the post-election environment, it is more important than ever that Moldova demonstrate its commitment to uphold freedom of expression. 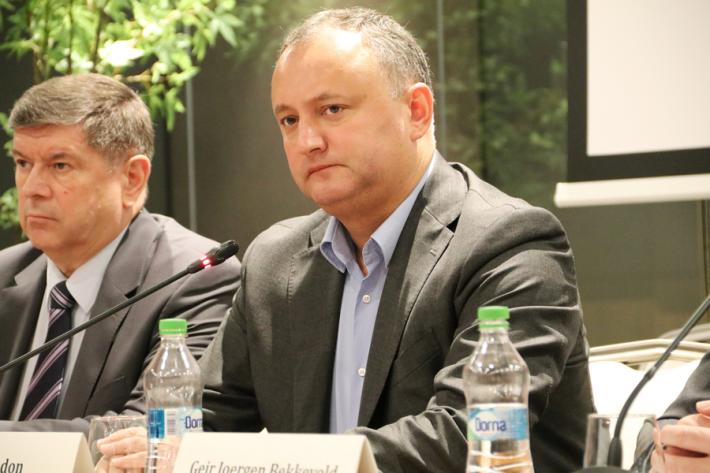 Igor Dodon, the President-elect of Moldova and leader of the Party of Socialists of the Republic of Moldova.

In the post-election environment, it is more important than ever that Moldova demonstrate its commitment to uphold freedom of expression.

The results are in from the run-off in Moldova’s contentious presidential election, the country’s first direct vote for the office in 16 years. Incoming President Igor Dodon, who leads Moldova’s pro-Russian Socialist Party, defeated challenger Maia Sandu of the pro-EU Action and Solidarity Party by a clear margin of 55.5 percent to Sandu’s 44.5 percent.

While these elections were not manipulated to the extent that they were in 2009, local and international monitoring missions reported widespread allegations of administrative abuse, lack of transparency in campaign financing, hate speech, polarized media coverage, voter fraud and other irregularities.

The broader geopolitical implications of Moldova’s new political reality should not be ignored. Nevertheless, given the election results, many citizens both in Moldova and the diaspora wonder what the outcome will be for civil society’s push for systemic reform to combat corruption and to support human rights. This is especially timely given that the elections coincided with Moldova’s second cycle of the UN Universal Periodic Review (UPR) process in Geneva. Freedom of expression, including combating hate speech, promoting access to information, and fostering greater media ownership transparency, will be important barometers for the overall state of Moldova’s commitment to democratic values.

Following the elections, the prognosis for fundamental freedoms is troubling, particularly freedom of expression. While strides have been made to improve the information environment, the country faces growing problems stemming from polarization, as well as pressure from the government, oligarchs, and media owners. The government has fallen short of efforts to improve access to information and ensure media diversity despite repeated calls for media legislation reform.  Some of the biggest pain points are access to information, particularly for investigative journalists, media independence and pluralism, and journalists’ self-censorship.

Investigative journalists and civic organizations confront numerous challenges when requesting access to public information, including obstruction to information on the part of government officials, refusals or delays in replying to requests for access to information, and purposefully incomplete or vague responses to requests. This was particularly evident ahead of the elections and during both rounds, as independent journalists from platforms such as Ziarul de Garda, the Center for Investigative Journalism (CIJM), the Association of Independent Press (API), and RISE Moldova encountered campaign finance laws that obstructed their access to key information, as well as the proliferation of false information, hate speech, and internet trolls. One of the most egregious examples of hate speech was leaflets funded by the Socialists with accusations against Maia Sandu about her “nontraditional sexual orientation,” and how electing her to the presidency would increase the negative visibility of the LGBT community.

The Elections: Not So Free or Fair

From both Moldovan and international sources, there is evidence that the election was poorly organized and that irregularities undermined the credibility of the electoral process and, ultimately, Dodon’s win. Sandu called for election officials to resign, citing problems with diaspora voters abroad and a higher-than-usual ballot count from Transnistria, Moldova’s breakaway autonomous republic with bodies of self-government under Russian military monitoring.

At Moldovan embassies in countries across Europe, including those in the United Kingdom, Italy, France, and Ireland, Moldovan citizens lined up for hours to vote, only to be turned away because the embassies ran out of ballots. Given that these votes were coming from EU countries, many of those who were unable to vote would likely have chosen Sandu over Dodon. In Transnistria, nearly 9,000 ballots were cast, and given that region’s close ties to Russia, the vast majority were likely votes for Dodon. Citizens of Transnistria do not typically vote in Moldovan elections, because the autonomous republic has its own president, parliament, and parallel institutions outside the control of Chisinau. International election observers from EFOR noted both of these irregularities, in particular pointing out that the laws governing the number of ballots to be made available for voters at foreign polling stations was applied selectively. This meant that those who were denied votes in some embassies were not given equal opportunity to cast a ballot.

European and other democracies cannot afford to neglect Moldova’s crisis, given the possibility of further instability in the country, but more importantly given the decline of freedom of expression and freedom of information. The struggle in Moldova goes well beyond that over affiliation with the European Union versus Russia. The challenges journalists faced in providing objective reporting around the elections, as well as the abundance of hate speech and polarized media coverage, signal that freedom of information is an area where the international community needs to engage the government and hold it to account on its commitments, particularly those accepted during the UPR. And the electoral irregularities documented do not bode well for the Moldovan government’s international commitments to fighting corruption.

The next step for democratic forces in Europe and the United States is to continue to empower civil society’s push for systemic reform, to call out those politicians across all parties who have perpetuated systemic corruption, and to support those who are fighting to improve dignity, respect for human rights, and fundamental freedoms in Moldova during this turbulent time.