Pandemic and Persecution in Venezuela

The COVID-19 pandemic has highlighted the fragility of Venezuela’s public health system, the gravity of the humanitarian crisis, and the extent to which the Maduro regime is intent on dismantling any vestige of democracy and respect for human rights. 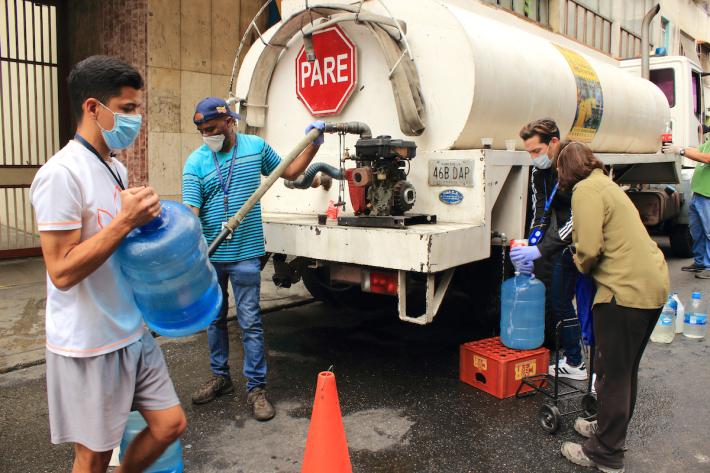 People fill containers with water from a truck in Caracas amid the COVID-19 pandemic. Image credit: Edgloris Marys / Shutterstock.com

As COVID-19 has spread across Latin America—killing more than 260,000 people  according to the European Centre for Disease Prevention and Control—governments throughout the region have used the virus as an excuse to silence critics and in some cases weaken already-fragile democracies. In El Salvador, President Nayib Bukele has used the military to crack down on quarantine violators, contravening a Supreme Court ruling. In Bolivia, the government of interim president Jeanine Áñez has threatened 10-year prison sentences for citizens who use social media to “misinform” about the pandemic’s effects in the country, and has used this and other virus-related decrees to persecute political opponents. And in Nicaragua, authorities have fired health care workers for challenging the government’s lackluster response to COVID-19.

But in Venezuela, Nicolás Maduro’s regime has capitalized on the pandemic with exceptional fervor. With near-complete control over the country’s institutions, Maduro has enacted and harshly enforced arbitrary pandemic restrictions, often using them to imprison regime critics. As the pandemic has occupied global attention, Maduro has taken steps to further derail the possibility for free and fair elections and a return to democratic governance in Venezuela. Meanwhile, the country’s humanitarian crisis has escalated amid the pandemic due to harsh policies and the catastrophic neglect of the health care system, with returning migrants facing some of the most dire conditions.

Drawing from human rights law, Freedom House has articulated a series of principles for protecting civil and political rights during the pandemic, all of which insist on governments’ clear and proportionate deployment of emergency restrictions. Venezuela’s arbitrarily enforced pandemic measures fall far short. The Maduro regime’s stringent lockdown includes restrictions on movement, rations on essential items and services including fuel, and bolstering of the National Police and Special Action Forces to enforce the measures. Yet, COVID-19 cases have continued to rise since the restrictions were enacted. Moreover, lockdown provisions have been harnessed to persecute regime critics.

According to Venezuela’s official statistics as of August 31, there have been 45,868 confirmed COVID-19 cases, and 381 related deaths. Yet, hospital workers have reported that the situation is much worse, and testing so limited that accurate data is scarce. The National Assembly’s medical advisory committee suspects that the mortality rate is at least twice as high as the regime’s figures show and has risen by 30 percent each week since early July, taxing the country’s crumbling healthcare system. Approximately two-thirds of the biggest hospitals in Venezuela do not have running water, for example, depending instead on unreliable water distributions a few times a week.

The virus has especially ravaged Venezuela’s border region, where as many as 100,000 migrants have recently returned to the country in the face of quarantine restrictions in receptor countries in the region. Nearly 40 percent of the country’s officially reported cases are concentrated in the four border states of Zulia, Apure, Táchira, and Bolivar, where the regime has forced returning Venezuelans to quarantine in unsanitary camps that have become breeding grounds for the virus, and are often run by criminal groups who extort and harass residents. Moreover, the Maduro regime has diverted blame for its failing COVID-19 response to migrants themselves, calling them biological weapons.

The regime has also escalated repression across the country under the guise of enforcing the quarantine. Venezuelan watchdog groups have reported particular pressure against healthcare workers and journalists who challenge the government’s narrative on the virus, and of Maduro’s political opponents. Between March and July 2020, government security forces arbitrarily detained 27 journalists and media workers, 12 of whom were specifically involved in covering the pandemic. In contrast, between January and March 2020, before the Maduro regime announced its COVID-19 measures, only three media workers were detained. Furthermore, by excluding journalists from its list of essential workers, the regime has restricted their access to gasoline rations, hindering reporting, especially from Venezuela’s more remote areas.

The Maduro regime has also increased detentions under the guise of enforcing COVID-19 restrictions. While the Venezuelan organization Foro Penal recorded only 24 politically motivated detentions between January 1 and March 8—around when the first COVID-19 cases in the country were recorded—257 politically motivated arrests were recorded between March 8 and July 31, many related to the pandemic. Detentions have also lasted longer during the pandemic, since courts across the country remain closed, a measure ostensibly meant to control the virus’s spread. However, in practice, shuttered courtrooms offer a convenient excuse to delay hearings and prolong detentions.

Political manipulation amid the pandemic

As the pandemic has occupied global attention, the Maduro regime has taken advantage of a less-watchful international community to further imperil the possibility for free and fair elections and a return to democratic governance. On June 12, the Venezuelan Supreme Court (TSJ), stacked with Maduro’s allies, bypassed the democratically elected National Assembly to unconstitutionally appoint a new National Electoral Council (CNE) favorable to Maduro.

In the past, such actions have evoked nationwide protests, but violently enforced quarantine restrictions have dampened the public’s appetite for mass demonstrations. Only 4,414 protests occurred in the first half of 2020, as compared to 10,477 during the same period in 2019. Instead, Venezuela’s main opposition parties have decided to boycott elections scheduled for December. The development sets the stage for an illegitimate election—much like the one in 2018 that resulted in Maduro’s contested presidency—which would exacerbate Venezuela’s ongoing political crisis.

The COVID-19 pandemic has highlighted not only the fragility of Venezuela’s public health system and the gravity of the humanitarian crisis, but also the extent to which the Maduro regime is intent upon dismantling any vestige of democracy and respect for human rights. The UN’s Independent International Fact-Finding Mission (FFM) for Venezuela can play a key role in maintaining a watchful eye on the country, even as the pandemic draws international attention away. To salvage hope for a return to democratic governance, the international community should join Venezuelan civil society in urging the UN Human Rights Council to renew the FFM’s mandate during its next session, and ensure that any humanitarian response to COVID-19 is coupled with continued pressure on the Maduro regime to respect fundamental rights.

The spread of COVID-19 has presented governments in Venezuela and around the world a shield to deflect blame for failing policies, and a guise behind which to double down on authoritarian practices and exert social control. In the midst of this unprecedented public health crisis, the international community must continue to exert diplomatic pressure to prevent democratic backsliding and the institutionalization of repression in Venezuela, and across the globe.

Throwing the Book at Civil Society: Antidemocratic Regimes in the Americas Are Using the Law to Narrow Civic Spaces