A possible plot to subvert term limits could shape the future of democracy in the country. 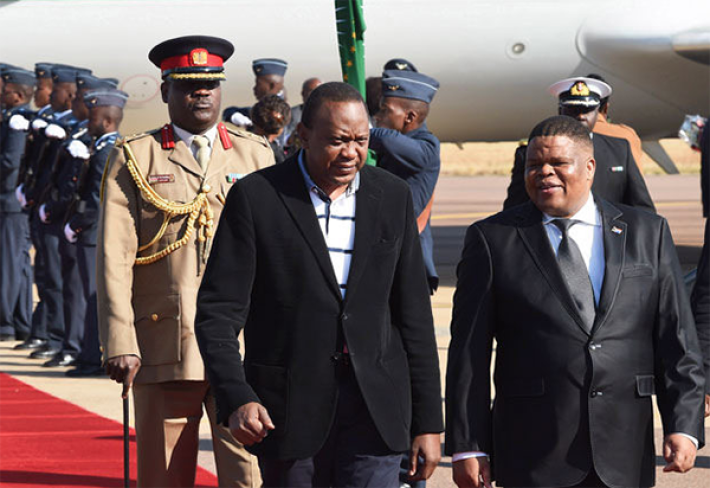 A possible plot to subvert term limits could shape the future of democracy in the country.

Just what is cooking in Kenya’s presidential politics?

What are the competing ambitions among Kenya’s top politicians regarding 2022, when President Uhuru Kenyatta’s second term expires? Does the March 9 handshake between Kenyatta and his longtime rival, former prime minister Raila Odinga, signal Kenyatta’s support for Odinga as his successor? Where does William Ruto, the deputy president, fit in? And, amid the jostling for power and possible new alliances, what is the future of Kenya’s electoral democracy in its broader constitutional environment?

One of the key factors behind Kenya’s current succession politics is the purported prior agreement between Kenyatta and Ruto. Even though no documentary evidence has been produced to support it, public rhetoric from key politicians has consistently pointed to a commitment on the part of Kenyatta to support his deputy’s presidential candidacy in 2022. However, it is unlikely that such an agreement could have been documented. In 2017, Kenyatta and Ruto merged their two parties—the National Alliance (TNA) and the United Republican Party (URP)—to form the Jubilee Party (JP). They are therefore, legally speaking, not in a coalition arrangement, which could have required that the agreement be deposited with the Registrar of Political Parties before elections. Importantly, too, there is no similar mechanism to anchor the kind of “gentlemen’s agreement” that is now in question.

A series of very public hints

Several recent events have made the succession debate even more intriguing. Last month, Kenyatta publicly urged those wishing to succeed him to conduct their campaigns in all parts of the country. At the same time he called on voters to “judge the potential candidates on the basis of their policies” rather than their political parties and where in the country they come from. These exhortations suggest that the president will not automatically maintain his presumed support for Ruto.

But what might have sent even stronger signals to Ruto’s political camp was a meeting of Kenyatta’s key allies in the small town of Naivasha, some 100 kilometers from Nairobi, in late October. Participants came largely from Kenyatta’s base in central Kenya and the Mt. Kenya region and were reportedly meant to discuss, among other issues, the presidential succession. However, that debate seems to have dropped off the agenda after pressure from State House and notable splits within the group.

It is worth noting that the meeting was convened two weeks after members of Parliament allied to Ruto walked out on the president during a public rally in the Rift Valley region, where Ruto wields political influence. The walkout, staged to embarrass the president over his silence about Ruto’s presidential bid, attracted the ire of Kenyatta’s key allies. The president’s supporters claimed that the group was blackmailing him even though he had not reneged on his promise to back Ruto’s candidacy.

Then there was the appointment of Odinga as High Representative for Infrastructure Development in Africa by the African Union—an appointment that was announced by Kenyatta himself during the October 20 Mashujaa Day (Heroes Day) celebrations. Though analysts differ on the issue, the fact that the announcement was made by the president and not by the AU chairman seemed to indicate that the Kenyan president had somehow influenced the appointment.

This in turn raised the question of whether Kenyatta had found a way to edge Odinga out of the 2022 political contest and, if so, for whose benefit. Alternatively, it could portend a further cementing of the new relationship between the two men. As expected, politicians allied to Ruto were quick to demand that Odinga, who has sought the presidency four times, concentrate on the AU job and “vacate” the local political scene. Odinga’s political allies responded that their man will be a presidential candidate in 2022 and that the AU posting gave him a higher profile befitting a presidential candidate.

There was also the extensive tour of Nyanza, Odinga’s political stronghold, by Senator Gideon Moi, son of former president Daniel arap Moi. Gideon, the chairman of the Kenya African National Union (KANU) party, addressed rallies in Nyanza and hinted at an alliance with Odinga. This was promptly welcomed by Odinga’s allies, who accompanied him on the tour.

The possibility of a Moi-Odinga alliance could explain Odinga’s high-profile meeting with Gideon Moi’s father, the former president, a few weeks after the March 9 handshake with Kenyatta. The meeting itself was loaded with political undertones and seemed to indicate, with the handshake, a convergence of the interests of the country’s three foremost political families—the Kenyattas, Odingas, and Mois—in the presidential succession.

But all these events dim in significance when one considers this month’s tour of Nyanza by the president himself. Though Ruto accompanied the president, it was clear that he was an unwanted guest: Most protocol arrangements seemed to suggest that the deputy president had been put in third place after the president and his host, Odinga.

A third term for Kenyatta?

The scenario of Kenyatta remaining in power in some way has been a matter of discussion since it was first raised during the 2018 Labour Day celebrations by the secretary general of the Central Organisation of Trade Unions (COTU). It further gained currency in public debate when a newspaper article, quoting unnamed allies of the deputy president, alleged the existence of a “Putin Group” behind plans to keep Kenyatta in power after his second term, much as Russia’s President Vladimir Putin had remained in power by serving a stint as prime minister from 2008 to 2012. It was the first time that a prominent newspaper made such claims.

Editors at the Standard newspaper thought the issue warranted an editorial, which was published on November 13 under the heading, “Uhuru ought to repudiate calls to extend his rule beyond 2022.” The paper argued that “fidelity to the constitution has ensured two smooth transfers of power,” from Moi to Mwai Kibaki in 2002 and from Kibaki to Kenyatta in 2013, adding that “the economic, social, and political benefits are huge.”

The issue not only raises significant constitutional questions but also puts the spotlight on the future of the country’s electoral democracy. Kenya’s constitution allows only two terms for a president. This norm has been the political reality for two decades, and it is now part of Kenya’s political culture. Those preparing to run for the presidency in 2022 have legitimate expectations that Kenyatta will not be a candidate.

If Kenyatta were to run for a third term, constitutional amendments would be required. Is it possible that Odinga’s proposal for an overhaul of the constitution, introduced after the March 9 handshake, is part of a succession agreement with Kenyatta? More importantly, how would other potential candidates react to this development, given Kenya’s often ethnically polarizing and potentially violent electoral campaigns? How, indeed, would Ruto and his supporters react to this possibility?

Ethnicity and loyalty to key political personalities are among the factors that most influence voting patterns. If, for instance, Kenyatta and Odinga were to campaign together for constitutional amendments, it is likely that they could generate substantial support for the changes they desire. In the current political environment, only an opposition movement led by Ruto could hope to match their influence. It would be somewhat reminiscent of the 2010 constitutional referendum, which pitted Ruto on the “no” side against Kibaki (then president) and Odinga on the “yes” side. (Kenyatta’s support for the new constitution at the time was rather “lukewarm.”)

Cautionary tales from the region

Even though certain features of the situation are unique to Kenya’s political culture, the East African region’s record on presidential term limits may hold lessons for the country. Three of the six East African Community (EAC) partner states have changed their constitutions in recent years to remove term limits or extend incumbents’ terms. In all three cases, these moves have led to political tensions or violence, particularly in Burundi. In this respect, the Standard is right to caution against any similar attempt in Kenya.

Nevertheless, other important players seem to be warming up to the idea of amending the constitution to expand the executive. In September, religious leaders hosted a meeting dubbed the National Dialogue Conference (NDC), which proposed enlarging the national executive to include a prime minister and reducing the number of legislative representatives, among other changes. The NDC notably failed to provide any sound justification for these ideas, which were strongly questioned by some of the delegates attending the meeting, pointing to the possibility that they were partisan.

What then is the future of Kenya’s democracy? The picture above suggests that political leaders will continue to polarize regarding a possible constitutional referendum. If it does take place, it will likely be an occasion for voters to confirm which side of the political divide they support, as opposed to a thoughtful consideration of the country’s constitutional structure or its democratic safeguards. This is the tragedy of the moment. There is a great and urgent need for Kenyans to generate consensus on the future of their democracy, a consensus that is informed and cautioned by the current political rhetoric and the negative lessons from the region.