This October, Moldovans will head to the polls and elect their president through a direct vote for the first time in 16 years. This upcoming contest will give citizens a chance to vote against corruption. The United States and Europe should show their support. 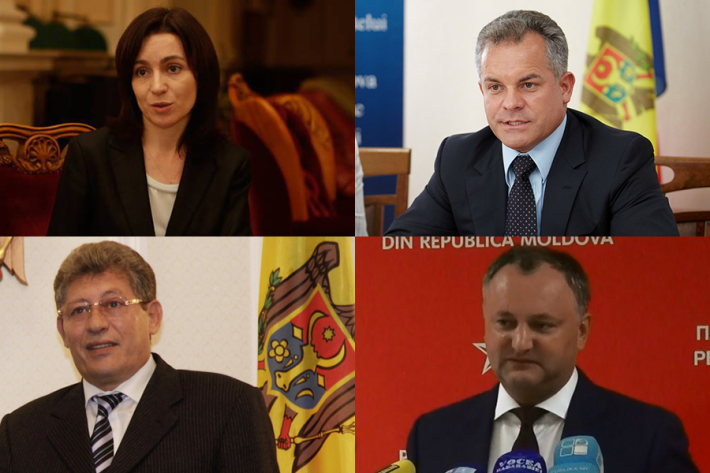 From left to right: Maia Sandu from a new party Action and Solidarity (photo by Iulian Burcescu [CC BY-SA 4.0], via Wikimedia Commons), Vladimir Plahotniuc from the Democratic Party (photo by Vlad Plahotniuc - CC BY 2.0), Mihai Ghimpu from the Liberal Party (photo by United Nations Development Programme in Europe and CIS), and Igor Dodon from the Socialist Party (photo by Accent TV 2015, CC BY 3.0).

The upcoming contest will give citizens a chance to vote against corruption. The United States and Europe should show their support.

This October, Moldovans will head to the polls and elect their president through a direct vote for the first time in 16 years. The decision to switch to direct elections, ending a system in which the president was chosen by a supermajority of the parliament, came in March, after 15 months of unprecedented street protests and nearly two years of political turmoil that crippled the country’s governance. One of the protesters’ key demands was elections, and for once it seems the political leadership—by scheduling a vote in response to a Constitutional Court ruling—has thrown its citizens a bone.

The main candidates include some of the usual suspects, such as Igor Dodon (Socialist Party), Vladimir Plahotniuc (Democratic Party), and Mihai Ghimpu (Liberal Party). There are also several new players in the presidential field, such as independent politician and reformer Maia Sandu, and Dignity and Truth protest organizer Andrei Năstase. Sandu in particular is a force to watch. A former minister of education, she has a strong record of cleaning up graft in Moldova’s school system, and has separated herself from the so-called “pro-European” and “pro-Russian” camps of the established parties by creating a new party, Action and Solidarity, whose platform focuses on tackling corruption.

This election could be a crucial opportunity for voters to change the political system, especially if they are able to learn about candidates’ positions, values, and policies for reform. Several independent outlets, including Ziarul de Gardă, the Center of Investigative Journalism, and RISE Moldova, have started publishing examinations of candidates and taking informal polls. One poll from Ziarul de Gardă indicated that Sandu could win 52 percent of the vote.

The view from foreign capitals

The international community is watching the country closely ahead of the election, although the United States, Russia, and the European Union (EU) view the situation through different lenses.

While Russia has its favored parties in the race, it also exercises influence through Transnistria, the unrecognized separatist entity on Moldova’s eastern border, which will hold its own presidential election in December. That vote seems to be a foregone conclusion, given the tendency of all candidates in the region’s circumscribed political system to favor a similar policy of asserting independence from Moldova and relying on Russia for diplomatic, economic, and military support.

The United States, for its part, appears to have reached out to Plahotniuc, Moldova’s dominant “oligarch,” who controls most of the country’s media. He made a highly publicized visit to Washington last month to curry favor with U.S. political leaders as a supposedly pro-Western leader. The United States’ recent dealings with Plahotniuc have dismayed and shocked many Moldovans, who see him as neither pro-European nor pro-Russian, but rather “pro-corruption,” according to journalist Natalia Morari. European officials may have a different take on Moldova’s situation. The EU delegation in Moldova recently criticized the country’s judiciary for its handling of the “Petrenco Group” case, which involves the detention of some of Plahotniuc’s political opponents.

In light of the “pro-European” camp’s abysmal reputation, Moldova’s historically pro-Russian parties—the Socialist Party and the Communist Party—see their star rising and have increasingly played the “traditional values” card to drive a wedge between Moldovan voters and the EU. In the latest turn of events, following a failed attempt to reverse the country’s antidiscrimination law, Socialist lawmakers developed a bill that would impose fines for “spreading homosexual propaganda” to minors “through public meetings, the media, the internet,” and other means. The parliament’s Culture and Education Committee approved this bill last month, shortly after Moldova’s annual Pride festival and parade. Recall that in 2013, Russian president Vladimir Putin signed the first such law into existence, and copycat legislation has appeared in places including Kyrgyzstan and Kazakhstan. Russia’s law, which is so open-ended that it can be applied to nearly anything or anyone that relates, however tenuously, to homosexuality, has been used to ban LGBTI support groups on Facebook, and even iPhone emojis.

The development and initial approval of a similar “gay propaganda” bill in Moldova is alarming, especially given that the EU still touts the country as a success story in its Eastern Partnership program—though this enthusiasm has fallen off recently given the Moldovan government’s inability to address pervasive corruption. The insidious portrayal of human rights for LGBTI people as an immoral, alien value imposed by the West has the potential to directly undermine human rights and freedom in Moldova. Several lawmakers, including Sergiu Sarbu of the Democratic Party, have argued that the bill is unconstitutional and violates guarantees of freedom of speech. Nevertheless, it could well move forward, causing deep concerns among civil society activists and the LGBTI community in the country. According to a recent poll, Moldova was ranked 42 out of 49 European countries in terms of levels of acceptance and tolerance of LGBTI people.

The presidential election will not only give citizens a direct hand in choosing their head of state, but also provide a chance to vote against corruption, rather than for or against Europe or Russia. The best way for the United States and the EU to promote democracy and their own interests in Moldova is to get behind civil society’s push for systemic reform to combat corruption, while continuing to support those who are fighting for dignity and human rights for all Moldovans. Given the tenuous nature of the preelectoral environment and the allure of “traditional values” for many citizens, Washington and Brussels cannot afford an ill-considered or divided policy on Moldova.