Press Freedom Gets Short Shrift in the Standoff over Al-Jazeera

None of the governments involved in the Qatar crisis are genuinely interested in independent media. 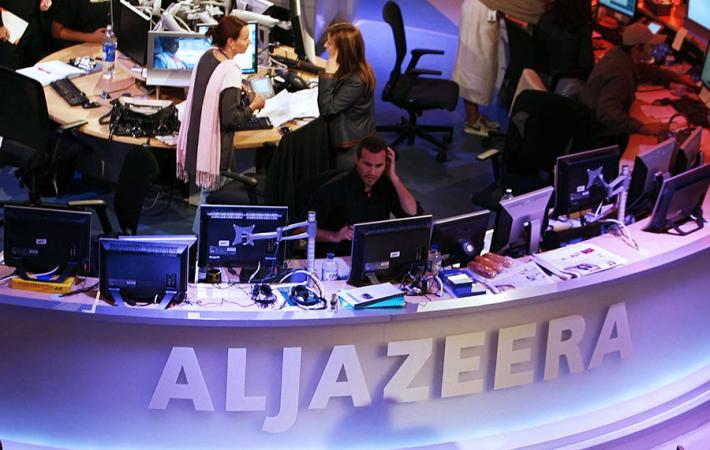 None of the governments involved in the Qatar crisis are genuinely interested in independent media.

Imagine you live in a country where the leading television news station is funded by a foreign government, actively promotes protests and regime change, and gives a platform to terrorists.

Now imagine you live in a country where the government controls all forms of media, even censoring the internet, yet there is still one news outlet that is unafraid to criticize the authorities, report on domestic dissent, and challenge the status quo.

For many residents of the Arab world, both of these descriptions match their own experience, and the news outlet in question is Al-Jazeera.

As part of their recent falling out with Qatar, the governments of Saudi Arabia, Bahrain, Jordan, and the United Arab Emirates have blocked Al-Jazeera, which is funded by the Qatari state and often serves as a mouthpiece for its maverick foreign policy. (In a separate move earlier this month, Israel also proposed banning the station.) Given the complexities of the situation, the affected viewers may be divided in their reactions. But one thing seems clear: None of the governments involved in the Qatar dispute are particularly interested in freedom of the press as a fundamental human right and an inviolable democratic principle.

The fact that the Arab states led by Saudi Arabia have demanded the permanent closure of Al-Jazeera as part of their confrontation with Qatar isn’t altogether surprising.

Egypt, one of the countries in the coalition, has banned Al-Jazeera since 2013, when the military ousted a civilian government led by the Muslim Brotherhood. The new regime targeted the channel due to its almost laughably biased coverage in support of the Brotherhood and against the coup.

Al-Jazeera had also cheered on antigovernment protests across the region during and after the so-called Arab Spring of 2011. Needless to say, Saudi Arabia and its authoritarian allies didn’t take kindly to the most popular news outlet in the Arab world broadcasting images of people protesting and calling for their leaders’ downfall.

However, Riyadh’s discontent with Al-Jazeera can be traced back to 2002, when it withdrew its ambassador to Qatar over the station’s coverage of Saudi policy, and even earlier to the mid-1990s, when Al-Jazeera was formed—with help from the emir of Qatar—from the remnants of the original BBC Arabic television station, which had been closed under Saudi pressure. Saudi Arabia’s demands in June that Al-Jazeera be shuttered were just the latest manifestation of this old feud.

In Freedom House’s latest Freedom of the Press report, Saudi Arabia, Bahrain, the UAE, Egypt, Jordan, and Qatar are all ranked Not Free. The authoritarian governments in these countries have the power to shut down media outlets, close foreign news bureaus, and block internet content without worrying about democratic checks and balances. They are also able to ensure that any remaining media outlets toe the government line and promote official policies.

The same cannot be said of Israel, which makes its recent moves to join in the bans on Al-Jazeera all the more concerning. Israel is ranked Partly Free, having been downgraded from Free in last year’s report due to growing threats to media independence in the country. After Prime Minister Benjamin Netanyahu threatened to shut down Al-Jazeera for alleged incitement several weeks earlier, Israel’s communication minister on August 5 announced plans to proceed with the effort, saying, “democracy has limits.”

In Israel, however, censorship also has limits. The government must overcome numerous obstacles before it can shut down Al-Jazeera, including the need to pass a law in the Knesset after it reconvenes in October, constitutional checks involving different ministries and the attorney general, and what will likely be a series of court challenges. Furthermore, blocking access to Al-Jazeera via private satellite broadcasts and its popular online streaming service will be next to impossible for Israeli authorities.

It is easy to see why Israel would take issue with the Qatari station’s coverage. Al-Jazeera regularly reports from “occupied East Jerusalem,” showed a strong bias in favor of Palestinians in past clashes and military conflicts, and once celebrated the release of a convicted terrorist who killed several Israelis with an on-air party. For their part, the Arab countries led by Saudi Arabia have been increasingly frustrated with Al-Jazeera’s tilt toward antiestablishment Sunni Islamist movements. While some of these biases filter through to its award-winning Al-Jazeera English service, the Arabic version that is broadcast into 310 million homes across the region is far more strident. It has been called “Fox News on steroids” and accused of “flirting with the promotion of violence.” In short, it is not considered fair or objective.

No solutions in sight

Obviously, Al-Jazeera isn’t a perfect network, but that isn’t sufficient justification to block its broadcasts or shutter its local news bureaus. Freedom of the press must be respected, and opposing or even “offensive” views should not be forcibly silenced. Even more importantly, Al-Jazeera’s reporting should never be used as an excuse to threaten the safety or liberty of its journalists.

Media freedom organizations have criticized efforts to crack down on Al-Jazeera, but Saudi Arabia, the UAE, Bahrain, Jordan, Egypt, and now Israel are holding firm. Qatar, meanwhile, has refused to give up the station, even in the face of a regional blockade. Al-Jazeera may tone down its coverage, as it did to defuse past spats with Qatar’s neighbors, but this would effectively involve a diplomatic agreement and an order from the emir. Journalists would not be part of the discussion.

Whatever the eventual solution to the present standoff, it is unlikely to bring the people of the region any closer to the truly free and independent media landscape that they deserve.