Putin's policy of cultivating foreign leaders can backfire in democracies. 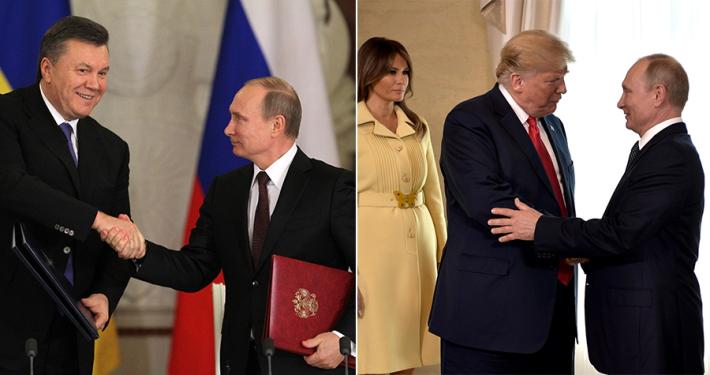 Putin's policy of cultivating foreign leaders can backfire in democracies.

Authoritarian governments, generally speaking, don’t have allies in the truest sense of the word. Rather than forging long-term, legally binding partnerships with other nations, grounded in mutual trust and shared democratic values, authoritarian powers tend to rely on a mixture of force and personal co-optation of foreign leaders to bring smaller countries into their orbit.

This strategy can be effective for a time when the target country is also undemocratic: Major democracies are less inclined to come to its rescue, and the co-opted leader is not troubled by term limits, checks and balances, free elections, or public dissent.

However, problems can arise when the target country is a democracy, as Russian president Vladimir Putin found out in Ukraine in 2014. Viktor Yanukovych, Putin’s preferred presidential candidate dating back to the Orange Revolution of 2004, finally won office in 2010. He was initially reluctant to choose between European integration and a closer bond with Russia, as much of the Ukrainian public favored the former.

At the end of 2013, Yanukovych finally decided to reject a new pact with the European Union in exchange for significant financial support from Moscow. But the move touched off massive street protests that ultimately prompted Yanukovych to flee the country in early 2014. While Putin responded by seizing Crimea and fomenting a conflict in eastern Ukraine, he effectively lost his grip on Ukraine as a whole, turning it instead into an implacable enemy.

This experience should serve as a warning with respect to Putin’s policy toward the United States. His government intervened to assist Donald Trump in the 2016 presidential election, and he has since pressed the Trump administration to drop U.S. sanctions and other efforts to hold the Kremlin accountable for its blatantly aggressive behavior. Putin may think that his unusual rapport with Trump gives him a new level of control over U.S. policy, but should he jerk the steering wheel too hard in the wrong direction, it might snap off.

In other words, as with Ukraine, he could be left with a friendly leader who has utterly lost the ability to lead. The current bipartisan backlash over the Helsinki summit—including talk of yet another round of U.S. sanctions against Russia—is just a hint of what could result from a more substantive capitulation to Moscow’s wishes by the president.

Policy in a democracy is not made by one man, and any public official is subject to replacement if the public finds his performance unacceptable. To change America’s strategic position in any meaningful way, Putin will have to convince many more Americans that it is in their interest to bend the knee. Good luck with that.