Sheri Berman of Columbia University explains the background and implications of the election results. 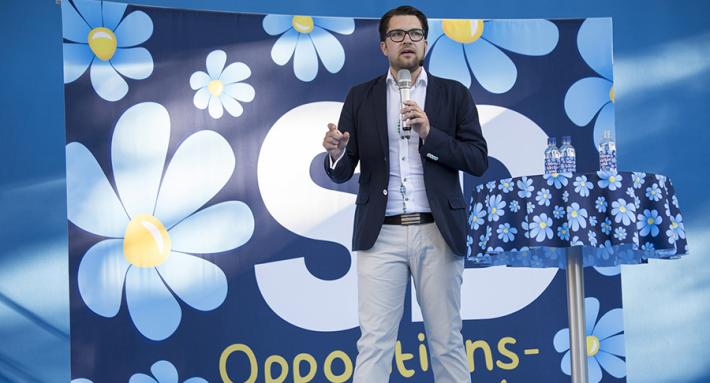 Sheri Berman of Columbia University explains the background and implications of the election results.

Sheri Berman is a professor of political science at Columbia University’s Barnard College. Her forthcoming book, Democracy and Dictatorship in Europe: From the Ancien Regime to the Present Day, will be published by Oxford University Press in January 2019.

In the Freedom House interview below, Professor Berman describes the forces behind Sunday’s election results in Sweden, which made the populist Sweden Democrats the third-largest party and denied both the ruling Social Democratic Party and the center-right Moderates a governing majority.

What are the main factors behind the rise of the Sweden Democrats in recent years?

Two main types of changes are usually invoked to explain the rise of populism: economic and social. In Sweden there is evidence for the impact of both, but not in a straightforward manner.

Economically, Sweden has generally done very well over the past decade or so: Growth is high, unemployment is low (with high labor force participation), and the country is consistently ranked as highly competitive and innovative. Inequality has increased, and this is an issue, but it remains comparatively low.

However, a significant change in the Swedish welfare state that began over a decade ago has created social and political problems. Much of the welfare state was in essence privatized, which diminished the quality and equality of service, particularly in schools and health care. (Education and health care remain free, but many schools, hospitals, and so on are run by private or even for-profit entities.) This has led to fears of a hollowed-out, unequal welfare state, and contributed to resentment of migrants, who are seen as the cause of the decline.

In fact, while migrants certainly have placed an additional burden on the welfare state, the decline in the quality and equality of service has more to do with these policy changes than anything else. Many low-income voters without higher education now support the populist Sweden Democrats, who have presented themselves as strong defenders of the welfare state but blame immigration for its problems. (For the impact of welfare-state reforms and other economic factors on voting, see this recent analysis.)

This brings us to the issue of social change. Sweden now has a higher percentage of foreign-born residents than the United States and any other European country (except microstates like Andorra or Monaco). Moreover, the rate of change has been astounding. During the refugee crisis, Sweden took in twice as many refugees proportionally as Germany, but immigration was well under way before that. A generation or so ago the country was fairly homogeneous, while today almost 20 percent of its citizens have “foreign” roots. Crucially, until recently the mainstream parties did not directly address either the practical problems associated with such rapid immigration (including the migrants’ education levels and ability to join the workforce) or the concerns many citizens had about social integration or assimilation and the impact on the welfare state. All election polls have shown that these issues are among voters’ top concerns. The major parties’ comparative silence provided an opening for the Sweden Democrats to set the agenda on migration and paint growing diversity in dystopian terms, despite the fact that most Swedes remain quite open and tolerant.

A few months before the elections, the mainstream parties realized that they had gone too long without addressing voters’ concerns about migration, and they began discussing these issues. But they did so entirely on the ground staked out by the populists: The emphasis was on crime, limiting overall numbers and family reunification, etc. There wasn’t much in the way of optimism or a positive vision for how these new citizens could enrich the country, and the Sweden Democrats’ vote share rose accordingly.

Where would you place the Sweden Democrats on the spectrum of right-wing groups?

Unlike some other right-wing populist parties, the Sweden Democrats do have roots in neo-Nazi movements. The current leadership has tried to purge the party of neo-Nazis and overtly racist rhetoric, but it has not been fully successful in doing so. These leaders, moreover, continue to make statements that are clearly xenophobic if not racist. The party favors strict limits on further immigration, and sending back as many migrants and asylum seekers as possible. It also claims to be anti-EU. Its profile, in short, is fairly standard right-wing populist.

Do the results signal further erosion in the status of European social democracy?

Absolutely. As is the case across Europe, the Social Democrats in Sweden have been in decline for some time, but these elections were the party’s worst yet. Not only has its vote share declined overall, it is also losing its grip on its key constituency—workers. There is currently some dispute in the postelection analysis, but it appears that at least 20 percent of union members voted for the populists. About 11 percent of the Social Democrats’ 2014 voters switched to the Sweden Democrats in these elections, a higher percentage than went to any other party. This is somewhat surprising because ties between unions and the Social Democratic Party have remained comparatively strong, and unionization rates comparatively high. Although the Social Democrats retained their position as the country’s largest party, they did not win enough seats to form a majority coalition—even with the two other parties on the left, the Greens and the Left party.

Will there be any shift in Sweden’s commitment to a generous welfare state?

Interestingly, as noted earlier, there has already been a massive shift in the nature of the Swedish welfare state over the past generation. It is still “broad”—it covers pretty much everyone—but much of it is now administered by the private sector. This has shaped the quality and equality of service and changed the way citizens view it. If a Social Democratic majority government had been possible, there would have been moves to “renationalize” many services, but that is no longer an option. A minority left-leaning government wouldn’t have the votes to strengthen the welfare state in this way, and a right-leaning government wouldn’t have an interest in doing so. The Sweden Democrats claim to want to strengthen the welfare state, but by this they really mean limiting benefits to asylum seekers and new immigrants as much as possible.

Does Sweden fit into the broader regional pattern of weakening mainstream parties and growing populist groups?

Yes, traditional parties have definitely weakened. The largest parties on the left, the Social Democrats, and the right, the Moderates, have seen their vote shares decline dramatically, and there are now eight parties in the parliament. The left can’t form a majority coalition on its own, and the right can’t do so without the Sweden Democrats. Up until now, no party has been willing to work with them, but since the elections the Sweden Democrats’ leader has made clear that he expects to have greater influence. He says he will vote against a Social Democratic government and is trying to lure the right-leaning parties into working with him.