Most of the world’s leaders are chosen through elections, but some attempt to stay in office indefinitely, even if it means bending democratic institutions to their will. 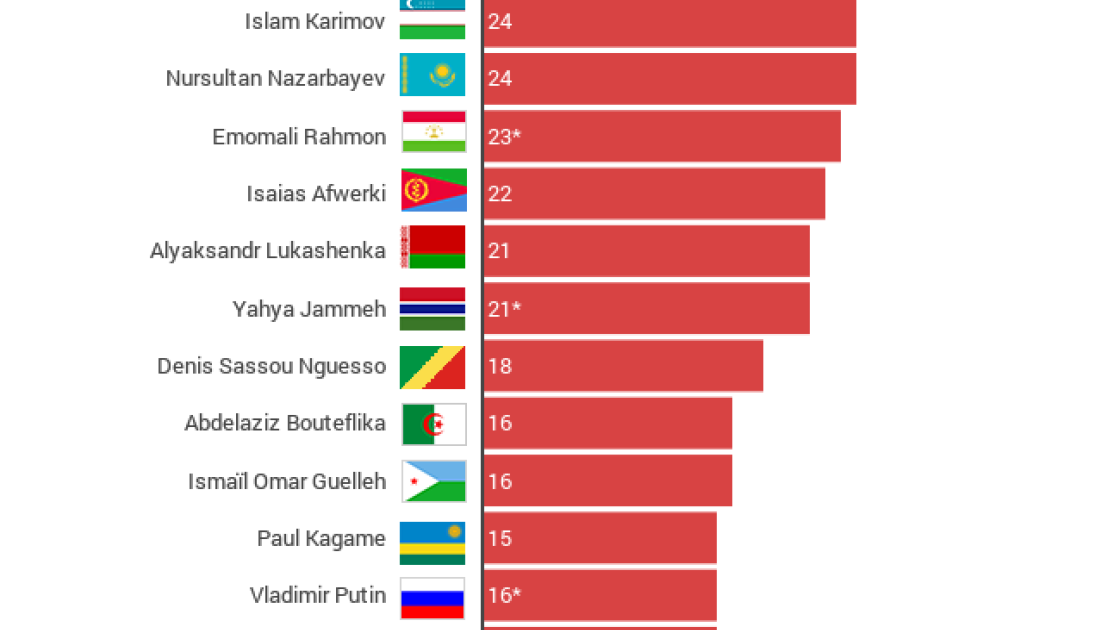 by Elen Aghekyan, former Research Analyst, Freedom in the World and Freedom of the Press

Most of the world’s leaders are chosen through elections, but some attempt to stay in office indefinitely, even if it means bending democratic institutions to their will.

On February 21, Bolivian voters will take part in a referendum on presidential term limits. If they accept the proposed constitutional amendment, the path will be cleared for Evo Morales—who has already served for 10 years—to seek a fourth term in office in 2020. In doing so, Morales would join a growing club of leaders who have sought to extend their stay in power beyond existing constitutional barriers.

Excluding hereditary monarchies, there are close to 40 countries around the world in which the national leader has been in power for 10 or more years. In some cases, the rulers have earned their long tenures through relatively free elections and remained within constitutional bounds. In the vast majority, however, a single leader has stayed in power by abusing, weakening, or completely overriding key democratic institutions. These individuals hold elected offices in republican systems, but their long reigns often come to resemble those of kings and sultans.

Unlike other forms of authoritarian rule, this governance model lacks a clear succession plan. True monarchies are hereditary by law, and communist regimes like China and Vietnam have collective party leaderships that perpetuate themselves without recourse to open elections. But because elected leaders hoping to extend their rule must rely on the aggressive manipulation of constitutions, legislatures, and the popular vote, they give little consideration to the health of the system beyond their own lifetime. In virtually every case, the result is an extremely personalized state buoyed by empty institutions and facing a high probability of dysfunction—and even violence—following the leader’s inevitable departure.

A bag of tricks for staying in power

A small number of rulers stay in office by simply ignoring the letter or spirit of the law. Eritrean president Isaias Afwerki, for example, has indefinitely postponed presidential elections, ruling the country through sheer repression and intimidation since its formal independence from Ethiopia in 1993. However, the key to success for most long-ruling strongmen has been the abuse of democratic processes, and they have developed a number of tactics in this regard.

High costs and an uncertain future

While many autocrats have found ways to entrench themselves in office, there are few examples to follow for making such a personalized system sustainable. Some leaders have groomed successors—sons, wives, trusted lieutenants. But the destructive effects of one-man rule on an electoral republic often leave little in the way of effective state institutions to guarantee continuity or long-term stability.

In fact, several leaders’ attempts to extend their own tenures have led to violence. For example, President Pierre Nkurunziza’s decision to seek a third term last year has pushed Burundi to the brink of civil war. Even when power grabs fail and the would-be leader for life is removed, the wreckage they leave behind makes it difficult to build a functioning democracy. Burkina Faso’s Blaise Compaoré was ousted amid a mass uprising in 2014 after he attempted to lift term limits, but preparations for elections in 2015 were disrupted when former Compaoré loyalists attempted a military coup.

Whether it comes before, during, or after the leader’s departure, each of these countries clearly pays a price for their rulers’ personal ambition.