As Sanctions Are Suspended, Belarus’s UN Human Rights Monitor Remains on the Sidelines

The UN special rapporteur for Belarus, up for renewal this week, is still banned from entering the country. But the monitoring mechanism is needed now more than ever. 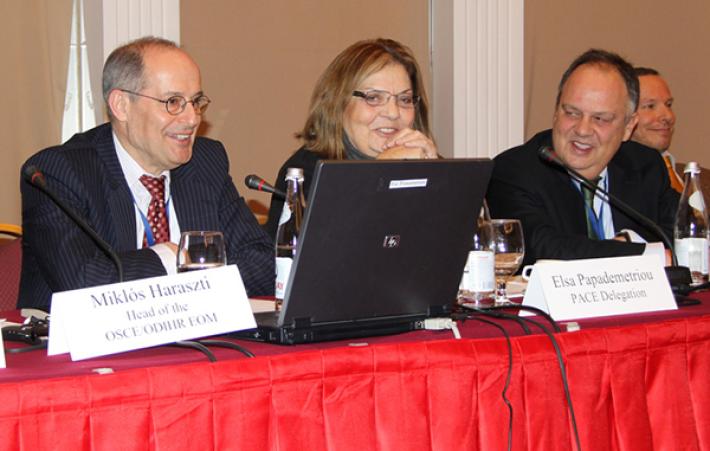 The UN special rapporteur for Belarus, up for renewal this week, is still banned from entering the country. But the monitoring mechanism is needed now more than ever.

On June 30, the UN Human Rights Council will vote on whether to renew, for the fifth consecutive year, the mandate of the special rapporteur on Belarus. The Belarusian government has refused to recognize the mandate and to grant Special Rapporteur Miklós Haraszti access to the country.

The mandate was established in 2011 in response to a violent postelection crackdown on peaceful protests in December 2010, which landed over 700 Belarusians in prison, including seven of the nine presidential contenders who ran against longtime incumbent Alyaksandr Lukashenka that year. The special rapporteur’s objective is to monitor the situation regarding human rights, provide recommendations to the Belarusian government on how it can fulfill its obligations under international law, and report to the UN Human Rights Council and the General Assembly on Belarus’s progress or lack thereof.

Of the 22 countries that originally voted for the establishment of the mandate, only five retain seats on the Human Rights Council. In 2015, the mandate was renewed in a 21–8 vote, with 18 countries abstaining. The United States, a staunch advocate of the mandate, is no longer on the council, and neither are many European Union countries that have been critical of Belarus’s human rights record. Both the United States and the EU have suspended long-standing sanctions and restrictive measures against Belarusian entities and individuals in response to the pardon of six political prisoners in August 2015 and the peaceful conduct of the presidential election that October. The suspensions were described as conditional—a show of trust that the Belarusian government would take further steps in support of human rights and fundamental freedoms in the country.

Unfortunately, the Belarusian government’s continued refusal to recognize or admit the UN special rapporteur is the most visible indicator of its actual intent to live up to its core international human rights obligations.

In his latest report in April 2016, Haraszti noted that the Belarusian government had attempted no further engagement with international human rights mechanisms, while showing insignificant progress on improving the human rights situation inside the country.

Haraszti has dutifully made requests to visit Belarus in his official capacity each year following the renewal of his mandate. The most recent request, dated February 17, 2016, and addressed to the permanent representative of Belarus to the UN Office at Geneva, has remained unanswered.

The government of Belarus has been only slightly more cooperative with monitoring mandates from other international institutions. Andrea Rigoni, the rapporteur on Belarus for the Parliamentary Assembly of the Council of Europe (PACE), was permitted to lead a fact-finding mission to Minsk in February 2015, but that was the first visit by a PACE envoy in five years. Rigoni visited Minsk again earlier this year for an international conference on the death penalty—a somewhat ironic event given that Belarus is the only European nation that still applies the death penalty, and faced condemnation for executing a prisoner in April. Belarus also granted access to a European Parliament delegation, led by Polish MEP Bogdan Zdrojewski, as recently as May. But in their statement following the visit, the delegates urged the EU and other observers to remain vigilant during the upcoming parliamentary elections in September. The European Parliament’s special rapporteur on Belarus, Lithuanian MEP Justas Paleckis, who was not able to visit Belarus in this capacity, delivered a highly controversial report in 2013 that caused an international outcry and received close to 300 amendments before finally being approved.

Since he is unable to enter the country, the work of the UN special rapporteur continues to be based on information received from various partners: victims of violations and their relatives, civil society actors, representatives of international and regional organizations, and diplomats. He can meet with interested parties outside of Belarus, and examine open sources including analytical publications, research papers, media reports, and government statements. However, there is little opportunity to meet with victims of human rights violations or observe events—such as public protests—directly. This leaves Haraszti’s reports even more vulnerable to sharp objections from Belarusian officials, who withhold cooperation and then call the reports one-sided.

The Belarusian government aspires to a greater political role in Europe, and to address its deep economic crisis, it is desperately attempting to restore the flow of foreign investment and loans from international financial institutions. These goals represent a key point of leverage for the international community in preventing further deterioration of the human rights situation in the country. Yet without an independent verification mechanism like the mandate of the UN special rapporteur, enforcing human rights conditions on a committed authoritarian regime can become a futile exercise.

The UN Human Rights Council should renew the mandate for another year, and the United States should use its regular bilateral meetings under the U.S.-Belarus Human Rights and Democracy Dialogue to insist that Minsk recognize the mandate. EU members should also continue championing the special rapporteur’s mission, both on the council and in bilateral meetings. In doing so, they must remain vigilant to ensure that recognition of the mandate does not become a simple checkmark on a list of requirements, but is treated as an important accomplishment that carries considerable weight for further engagement.

Most importantly, the Belarusian government should accept that cooperating with the special rapporteur is in the country’s own best interest. It would send a strong signal that Belarus is truly ready for closer economic and political engagement with—and shares the same fundamental values as—the democratic world.