A Saudi Shia Woman Faces Death for Her Activism

The kingdom’s Shia Muslim minority has long suffered discrimination and violence by the state. 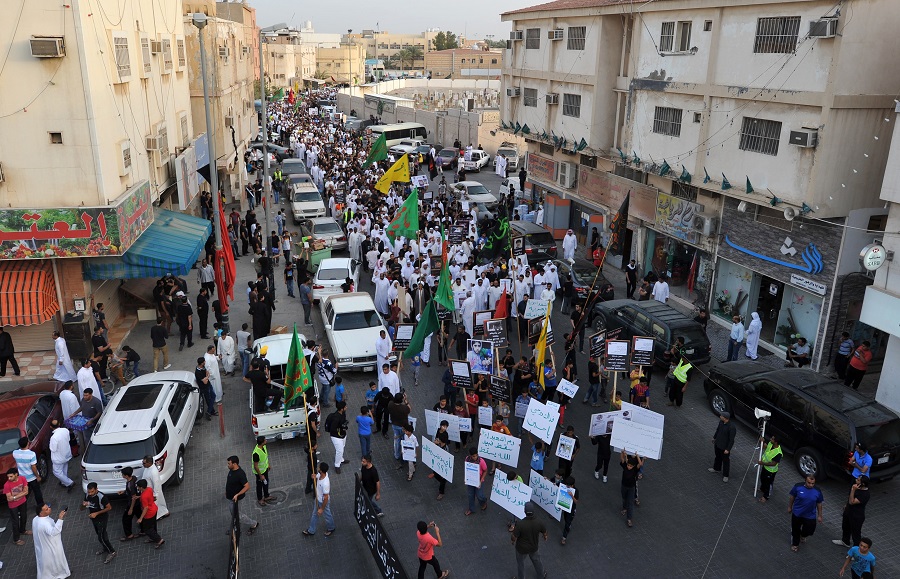 Protests in Qatif in May 2015. HUSSEIN RADWAN/AFP/Getty Images

The kingdom’s Shia Muslim minority has long suffered discrimination and violence by the state.

As the world remains riveted by the case of Jamal Khashoggi, the exiled journalist who was murdered at the Saudi consulate in Istanbul this month, the fate of another individual who has pushed for reform in Saudi Arabia is set to be decided early next week.

In a trial before the kingdom’s Specialized Criminal Court in August, the public prosecutor recommended the death penalty for activist Israa al-Ghomgham as punishment for her role in nonviolent protests calling for an end to systemic discrimination against the country’s Shia Muslim minority. On October 28, a judge will either confirm or reject a death sentence. If the sentence is upheld, al-Ghomgham will be the first Saudi woman to be executed for human rights–related work. Although her case is unique in this sense, it is also just the latest chapter in a long history of violence against any Saudi Shias who have dared to challenge their community’s social and economic marginalization.

Shias, who constitute 10 to 15 percent of the Saudi population, have been excluded from the kingdom’s levers of power since the Shia-majority region of Al-Hasa was first conquered by the armies of Ibn Saud in 1913. Disdain for Shia beliefs and practices among the leaders of the country’s religious establishment has long been coupled with a suspicion among Saudi security forces that Shia political loyalties belong to a foreign entity—such as Iran, or in earlier decades, Nasserist Egypt—rather than to the monarchy.

The Saudi government regularly violates Shias’ religious liberties. They are not permitted to build mosques in most of the country, and the government has prosecuted Shias for hosting private prayer sessions in their homes. Government-sponsored Sunni clerics regularly refer to Shias in demeaning language and demonize their religious activities. These scholars have used school textbooks, which are rife with blatantly sectarian language, to teach Saudi students to resent Shias from a young age.

Meanwhile, Shia religious observances face restrictions even in the few parts of the country where they can be legally held. Just last month, Shias in the Eastern Province city of Qatif reported that authorities removed food stands that had been set up for mourners during Ashura, the Shia holiday commemorating the martyrdom of the Imam Hussein.

In addition to lacking basic religious freedoms, Shias suffer severe economic marginalization vis-à-vis their Sunni compatriots. Although Eastern Province, where most Saudi Shias reside, contains the majority of the kingdom’s oil wealth, the region is one of the poorest on a per capita basis. All over the country, Shias face discriminatory hiring practices in both the public and private sectors. Those who do obtain government jobs frequently complain of obstacles to upward mobility within their sector, which is evident in the absence of Shias among top Saudi diplomats and security officials.

For his part, Crown Prince Mohammed bin Salman denies that Saudi Shias face any discrimination. “The Shiites are living normally in Saudi Arabia,” he told the Atlantic’s Jeffrey Goldberg earlier this year. Meanwhile, some analysts have pointed to a few recent advancements—such as the appointment of the first Shia cabinet minister—as signs that the position of Shias is improving. Symbolic gestures, however, have not changed the fact that Shias continue to live as second-class citizens in Saudi society.

A history of activism and repression

Saudi Arabia’s Shias have not passively accepted their position. Since the early days of the modern Saudi state, they have engaged in various forms of activism to push for economic and social equality. The criminal prosecution of Israa al-Ghomgham fits into a long history of repression directed against any Shias who have engaged in peaceful political activities to combat their marginalization.

The first major instance of mass mobilization by Saudi Shias took place in the 1950s, when thousands of employees of the oil company Aramco, most of whom were Shia, went on strike to demand improved wages and working conditions. In conjunction with the strikes, activists founded the National Reform Front, which called for the equal treatment of Sunnis and Shias and the abolition of special levies on Shias, among other goals. In 1956, the government cracked down on the uprising through mass arrests of labor activists and a ban on unions and strikes.

The next major wave of Shia activism occurred in the immediate aftermath of the Iranian Revolution. In 1979 and early 1980, tens of thousands of Shias participated in an uprising that aimed to challenge the political and economic disenfranchisement of their community. Security forces killed dozens of demonstrators, and in the following years, hundreds of Shias were imprisoned for their participation in the protests.

Eastern Province’s most recent outbreak of mass protest began in 2011. The grievances that underlay the contemporary period of Shia mobilization—including discrimination in employment, underdevelopment in Eastern Province, and constant violations of religious liberty—were strikingly consistent with the demands that drove the uprisings of previous generations. And just as in those earlier eras of unrest, Saudi security forces responded with violence and mass detentions.

The Specialized Criminal Court (SCC), which was established in 2008 to deal with individuals accused of terrorism charges, has become a key tool for silencing Shia activists during this most recent protest wave. In 2014, the court sentenced eight Shias to death, followed by another 14 in 2016. Human Rights Watch’s analysis of 10 SCC trial judgments against Shias for protest-related crimes found that in almost every case, the defendants repudiated their initial confessions, claiming that police had coerced them through methods that often amounted to torture. Unsurprisingly, like all other criminal courts in Saudi Arabia, the SCC does not include any Shia judges.

Israa al-Ghomgham is among those who have been unfairly tried by the SCC. She and her husband were arrested in 2015 and have been in detention ever since. The charges against her include “participating in protests in Qatif” and “providing moral support to rioters.” Like the murder of Jamal Khashoggi and the imprisonment of advocates for Saudi women’s right to drive, al-Ghomgham’s case is clearly meant to send a message to other would-be dissidents that no political activism, no matter how peaceful its tactics or modest its goals, will be tolerated.

Throughout the history of Saudi Arabia, the government’s fear of unrest among its Shia population has been a self-fulfilling prophecy: As the regime violates the freedoms of its largest minority group for supposed disloyalty, its members have become increasingly motivated to oppose the establishment and demand meaningful change.

Ending the cycle of uprising and violent repression will thus entail more than just freeing Israa al-Ghomgham, though that is certainly a necessary step. The Saudi government will have to enact concrete reforms to address the grievances that drove al-Ghomgham and other Shias to protest in the first place.