Scoring Ukraine in ‘Freedom in the World’

The release of Freedom House’s annual Freedom in the World report last week generated considerable debate about the findings for Ukraine. In the dialogue below, Arch Puddington, Distinguished Fellow for Democracy Studies, answers questions about Ukraine’s standing in Freedom in the World. 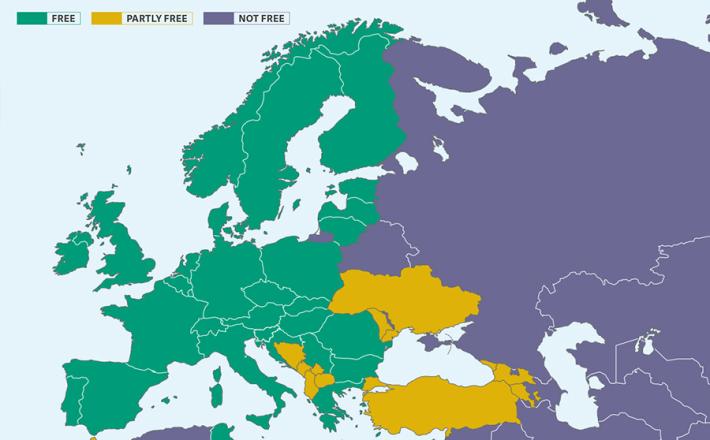 Given Ukraine’s occupied territories, ongoing conflict, and complex political arena, assessing the state of freedom in the country is no easy task.

The release of Freedom House’s annual Freedom in the World report last week generated considerable debate about the findings for Ukraine, and specifically about the report’s handling of Russian-occupied Crimea and the portions of the Donetsk and Luhansk regions—known collectively as Donbas—that are controlled by Russian-backed separatists.

In the dialogue below, Arch Puddington, Distinguished Fellow for Democracy Studies, answers questions about Ukraine’s standing in Freedom in the World.

The report assesses Crimea as a separate territory. Doesn’t this imply that there is a genuine dispute over Crimea’s status and that the two sides’ claims have equal legitimacy?

There is undeniably a dispute over Crimea, but it is a lopsided one. Virtually the entire world recognizes that Russia’s annexation of the peninsula was an illegal action, accomplished through military force, and that Crimea remains part of Ukraine under international law. Freedom House certainly shares this view. But our decisions on how to cover territories are based on criteria other than the justice of a particular claim or cause.

We are  mainly focused on the practical questions: Is the territory governed separately, with conditions very different from those in the rest of the country? Are the boundaries and political status stable enough for year-on-year comparisons? Since 2014, Russia has effectively controlled the territory of Crimea. Russian police patrol the streets, Russian officials collect taxes, Russian security forces detain local dissidents. We may consider this illegal, but these are the facts on the ground, and so they are reflected in our report.

Why is Crimea analyzed separately, but Donetsk and Luhansk are not?

Crimea’s effective boundaries have been clear since 2014, at which point Freedom House created a separate report for Crimea as a territory where conditions differ considerably from the rest of the country. Meanwhile, the de facto boundaries of the Donbas territory occupied by Russian-backed separatists shifted significantly back and forth. Certainly during that first year it was impossible to draw up a coherent geographical area for separate assessment in our report.

The front lines have stabilized somewhat since then. Freedom House now confronts the question of whether to treat the occupied Donbas as a separate territory, like Crimea, or to continue to include developments in Donbas as part of the overall Ukraine assessment. And here I’ll acknowledge that there are sensible arguments on both sides. Our decision to continue to include Donbas in the Ukraine report for now is largely determined by the sense that unlike with other similar disputes—Abkhazia, South Ossetia, Nagorno-Karabakh, Transnistria—the fate of this area still seems subject to sudden change. Despite formal cease-fires, a shooting war still rages, and the front periodically moves. It may be that the situation in Donbas will become a true frozen conflict, and we will change our approach accordingly. Though frankly I think that would be a disheartening development.

Doesn’t including Donetsk and Luhansk in the Ukraine report hurt Ukraine’s scores? Is it fair to judge Ukraine for the effects of Russian aggression?

Freedom in the World reports are meant to describe the conditions experienced by individuals in a given geographical area, whether they are caused by governments, rebels, criminal organizations, terrorists, or foreign powers. Unfortunately, Russian military activity in Ukraine does affect the freedoms of Ukrainians, just as Russian bombing in Syria affects the freedoms of Syrians, or Saudi bombing in Yemen affects the lives of Yemenis, or the actions of the FARC rebels affected the freedom of Colombians when that civil war raged. We try to apply the same methods and standards for all countries.

Including Donbas in the Ukraine report does depress the scores somewhat, but Ukraine’s scores are actually more affected by corruption and other weaknesses in the country’s democratic institutions than they are by the conflict in the east.

Do the Kremlin’s actions in Ukraine affect Russia’s scores at all?

Because the report assesses conditions inside a given country or territory, a government’s actions abroad generally do not factor into the scoring for its home country, at least not directly. When Russian authorities prosecute or attack Russian journalists and activists for questioning the Crimea annexation or investigating soldiers’ deaths, that would certainly be taken into account.

But Russia, for a variety of other quite legitimate reasons, already receives some of the lowest scores in the region. Indeed, it scores poorly in virtually all of the categories measured by Freedom House: elections, corruption, transparency, media freedom, academic freedom, rule of law, political violence, and more. The domestic abuses of this government are more than enough for one report.