The Secrets to Populist Success in Europe

With protean policies and social media savvy, populists have run circles around their mainstream opponents. 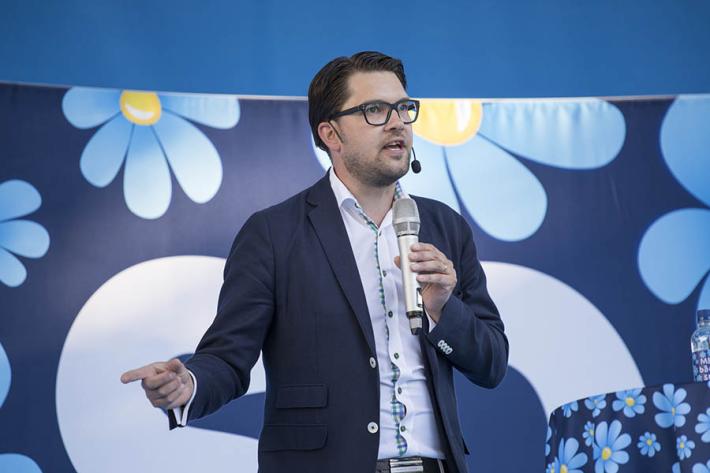 Jimmie Åkesson, leader of the Sweden Democrats © Per Pettersson

With protean policies and social media savvy, populists have run circles around their mainstream opponents.

Over the past few years, right-wing populist parties in Europe have transformed themselves from fringe movements into viable political competitors, even taking the reins of government in major democracies. Such parties have led Hungary and Poland since 2010 and 2015, respectively. In Italy, the far-right League and the Five Star Movement have just formed a ruling coalition. The Freedom Party of Austria (FPO) is the junior partner in a government with the main conservative party, and populist groups in Norway, Denmark, and Finland have similarly entered government in coalition with traditional center-right parties.

What is behind this remarkable spate of electoral success? A variety of factors are at work, but the parties in question share two key qualities—ideological flexibility on issues other than immigration and an ability to exploit social media effectively—that have played important roles in their accumulation of public support.

Europe’s right-wing populist parties are all hostile to immigration, but on other policy matters they seem willing and able to adapt to the local context. In an analysis of seven countries, a pair of researchers found that the best predictor of support for far-right parties was their restrictive position on immigration, as opposed to their endorsement of right-leaning economic policies or distrust of mainstream institutions and leaders.

In fact, in some countries the populist right has presented itself as a defender of the benefits of social democracy. A study focused on Finland and Sweden argued that the movement was “challenging the European welfare state tradition by re-defining it as the welfare nation state.” Populist parties there are trying to “re-confer social rights as belonging to the membership of a particular community.” According to the Sweden Democrats’ pitch to voters in 2014, “the election is a choice between mass immigration and welfare. You choose.”

Many of these parties have used a similar strategy to gain the support of the working class and the elderly. They have been able to compete with the center-right for anti-immigration voters, and with the center-left for voters interested in protecting the welfare state.

In other political environments, however, populist parties are just as likely to endorse traditional right-wing economic policies. Prior to the 2017 elections, the FPO in Austria promised to reduce bureaucracy and cut taxes for businesses, and rejected any new wealth tax.

In the modern information environment, a catchy slogan, well-designed gifs or memes, and inflammatory rhetoric on social media are far more likely to catch the public’s attention than official press releases, formal speeches, or carefully drafted but dull tweets from political figures. Right-wing populist parties have capitalized on this pattern of media consumption.

For example, the National Front in France has a whole office dedicated to expanding and maintaining its social media presence “by aggressively launching online campaigns that include viral hashtags, memes, and animated videos.” The UK Independence Party received twice the average number of likes earned by the Conservative Party on its Facebook posts, and although the Alternative for Germany party receives half the electoral support of the ruling Christian Democrats, it has twice as many followers on Facebook. The pattern is similar in the European Parliament, where more extreme members have greater online followings than their mainstream counterparts. For example, members from the Europe of Nations and Freedom group have their tweets shared 28 times on average, whereas those in mainstream groups have their tweets shared 6 times on average.

It is important to note that a substantial portion of the social media following of populist parties appears to come from outside their home countries. During the 2017 French presidential election, some 40 percent of Marine Le Pen’s “likes” came from outside of France, compared with 35 percent of Emmanuel Macron’s. The impact of bots is also hard to quantify, but these automated accounts certainly help to inflate the perceived support for populist campaigns.

The influence of social media is further amplified by the fact that populist-leaning voters distrust or don’t value traditional media. A Pew Research Center poll measured the difference in trust of traditional media between ordinary voters and populist sympathizers, defined as “those who said ordinary people would do a better job at solving the country’s problems than elected officials, and that politicians did not care what people like them thought.” There was a 31-point difference in trust of traditional news media between the two groups in Germany; a difference of more than 20 percentage points in Spain, Sweden, Denmark, and France; and a 17-point difference in Britain. Populists were also significantly less likely to say that news media were important to society.

Despite concerns about fake news, anywhere from 26 percent of Germans to 50 percent of Italians reported getting their daily news from social media, and one-third or more of social media news consumers in France, the Netherlands, Italy, and Britain told the Pew researchers that they did not pay attention to the sources for this news. This is particularly significant because roughly half of European adults now have a profile on Facebook, and about half of that group uses the platform as a source of political news at least occasionally.

As populists take advantage of this largely unregulated, direct, and cheap medium to reach their voters, traditional politicians typically use intermediaries like newspapers and television shows to communicate their ideas, and these forms of communication are accompanied by editorial scrutiny and fact-checking by professional journalists.

The “thin ideologies” and online savvy of right-wing populist parties are a potent combination. These groups find it “much easier to mobilize supporters around a common cause within a movement than within the cumbersome mechanics of a political party. And social networks have proven to be successful in mobilizing and organizing movements.” In other words, rather than developing detailed policy platforms in party committees and presenting them for analysis by journalists and other experts, the populists feel free to simply make polemical statements and pitch radical ideas to attract attention and support on social media, and avoid talking about substantive solutions or real-world consequences.

This is true even for populist parties that manage to win positions in government. Their rhetorical approach, honed online, typically involves pitting the masses against elites or citizens against migrants, and blame for any actual policy setbacks can be shifted to one or both of these foes. Unfortunately, mainstream political parties have yet to develop tactics that would allow them to finally hold their populist opponents accountable.