Serpent in the Bosom: Belgrade’s False Commitment to Balkan Stability

There can be no regional security in the Balkans without Serbia, but the current government has failed to play the constructive role assigned to it by the West. 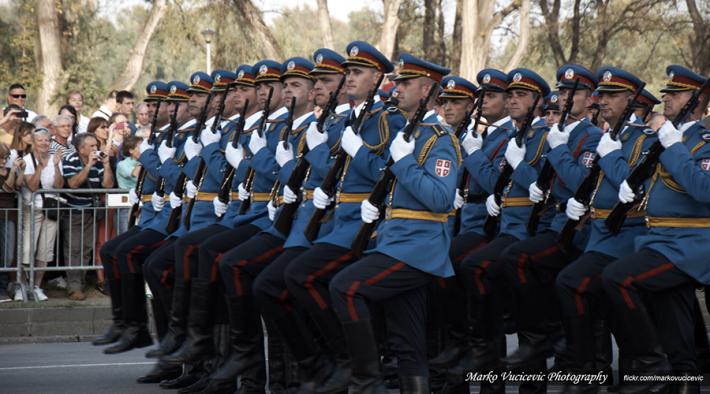 There can be no regional security without Serbia, but the current government has failed to play the constructive role assigned to it by the West.

U.S. vice president Joe Biden’s recent visit to Belgrade was an opportunity to reinforce a central pillar of both American and European Union policy in the Western Balkans. Namely, Washington and Brussels have spent the last several years insisting that Serbia is the key to regional stability. It’s a solid realpolitik approach: Serbia remains the region’s largest country, and under Slobodan Milošević it was the main belligerent in the Yugoslav wars. It is in the best interests of both neighboring states and the international community for Belgrade to make a definitive break with the past and join the economic and security structures of Europe.

The trouble is, that’s not the dominant view in Serbia itself.

The government headed by Prime Minister Aleksandar Vučić certainly believes that Serbia is the lynchpin of the region, or in the tradition of the Serbian foreign policy establishment, that the country is “the Piedmont of the Balkans.” Yet even the most cursory examination of this narrative reveals fundamental problems. Indeed, any honest assessment of Serbia today must conclude that the country remains politically, economically, and socially behind the curve. And this is no accident of history; it is a result of the deliberate policies of Prime Minister Vučić and President Tomislav Nikolić.

Consider the basic economic and social indicators. Serbia’s GDP per capita continues to lag behind those of Croatia and Slovenia. The country’s unemployment rate is not only higher than Croatia’s and Slovenia’s, but also Montenegro’s and Albania’s. Serbia is more corrupt than Croatia and Slovenia. It’s a country where the government and its proxies still routinely accuse the media and human rights NGOs of being foreign agents, and where “problematic” activists and journalists are dragged through the courts and in some cases murdered.

Some might argue that most of these comparisons are unfair. After all, Slovenia and Croatia are both EU and NATO member states, and Serbia is not. But that’s just the point. Why should leaders in Sarajevo, Podgorica, Skopje, Pristina, or Tirana look to Belgrade as an integration “role model”—as key policymakers in Brussels have suggested—when Zagreb and Ljubljana, for all their remaining problems, are farther along the path of definitive democratic and economic transformation?

A dubious guarantor of stability

In reality, the EU and Washington place this hortative emphasis on Serbia’s supposed role as a source of regional stability precisely because the opposite is true: Serbia remains far and away the biggest threat to the stability and security of the Western Balkans.

In April, Serbia held its fourth parliamentary polls since 2008. They were the second consecutive snap elections called by the Vučić government, despite the fact that the prime minister’s Serbian Progressive Party (SNS) already held a comfortable majority in the legislature. The elections were roundly criticized as further evidence of Vučić’s ongoing power grab. The eventual results were doubly worrisome. They confirmed not only the weakening of the country’s left-liberal opposition, but also the return of the ultranationalist Radical Party, of which both Vučić and Nikolić had been members until 2008.

After winning another clear majority, Vučić held off on forming a government for months. When the government was finally announced, it came with a rambling, six-hour lecture to the parliament by the prime minister, which the opposition boycotted. The delay notably had nothing to do with internal party wrangling or the opposition’s dissent. Instead, it stemmed from Belgrade’s need to confirm its appointments with the Kremlin. Despite claims that Serbia is continuing Yugoslavia’s “neutrality” policy with regard to NATO and Russia, the facts suggest otherwise.

Russia and the ‘near abroad’

In 2014, Belgrade hosted Vladimir Putin as a guest of honor for a nominally World War II–themed military parade. A year later, Serbian troops were invited to participate in joint military exercises with Russian and Belarusian armed forces in Russia’s south. Brussels made its disapproval clear, but then proceeded to open EU accession chapters with Belgrade not two months later. Since then, Serbia, along with Croatia, has been exposed as a leading arms supplier to the wars in Syria, Iraq, and Afghanistan; has pledged to support Russia’s so-called “humanitarian relief efforts” in Aleppo; and has announced two further rounds of joint military drills with Moscow.

Then there are Serbia’s activities in its “near abroad.” Relations with Croatia continue to deteriorate, with progovernment media in Belgrade resuscitating the worst 1990s propaganda. (Vučić once served, incidentally, as Slobodan Milošević’s information minister.) Relations with Kosovo remain tense, and despite technically conceding the definitive departure of Pristina from Belgrade’s orbit, Serbia continues to lobby actively—but with limited success—against Kosovo’s incorporation into various international political and cultural organizations.

But it is in Bosnia-Herzegovina that Serbia’s duplicitous claims of fostering “stability” and “reconciliation” are truly laid bare. Belgrade continues to insist on a “special relationship” with Bosnia’s Republika Srpska (RS) entity and its hard-line nationalist leader, Milorad Dodik. Croatia, by comparison, had already directed Croats in Bosnia-Herzegovina to look to Sarajevo, not Zagreb, as their capital by the early 2000s. Serbia, meanwhile, continues to nurture Dodik’s secessionist rhetoric while occasionally feigning restraint.

Just this month, as Dodik flouted Constitutional Court decisions and announced illegal referenda that threaten to unravel Bosnia-Herzegovina’s still tenuous peace, Serbia announced joint security drills with the RS police—without approval from Sarajevo. Recall too how doggedly the Serbian leadership pressed Russia—the other major patron of the RS government—to veto a symbolic UN Security Council resolution on the 20th anniversary of the genocide in Srebrenica, while simultaneously seeking “forgiveness” from the survivors and victims’ families across the Drina River.

Even if Belgrade eventually decides to talk Dodik back from the edge of chaos, Serbia cannot have it both ways. Croatia is certainly not without its problems, but compared with Belgrade, Zagreb has been the picture of responsible and constructive governance. It is time for both the EU and the United States to speak clearly on Serbia’s supposed balancing act between east and west.

Dispelling the fog of diplomacy

If Serbia is to be a serious candidate for EU membership, its leaders must immediately cease their clampdown on civil society and independent media. The Vučić government must respect the accepted rules of electoral democracy, and it must stop treating any criticism of its administration as tantamount to high treason.

Above all, Belgrade must clarify its foreign policy objectives, posthaste. Serbia may wish to be the Kremlin’s satellite in the Balkans, but in that case it can no longer expect to continue its EU path. To pretend otherwise would be to mislead the Serbian public. Nor can Belgrade expect to move closer to Brussels so long as it deliberately sabotages and undermines the sovereignty and stability of Kosovo and Bosnia-Herzegovina.

There is no doubt that Serbia ought to be central to Balkan stability and security. Presently, however, the leadership in Belgrade still harbors something like the old “serpent in the bosom,” as Milošević once described Serbian nationalism. What needs to change in Serbia is no mystery, and it’s time for Europe and the United States to state it plainly.

Dr. Jasmin Mujanović is a political scientist specializing in the politics of southeastern Europe, and the politics of post-authoritarian and post-conflict democratization more broadly. His first book, Hunger and Fury: The Crisis of Democracy in the Balkans, is forthcoming in 2017 from Hurst Publishers.