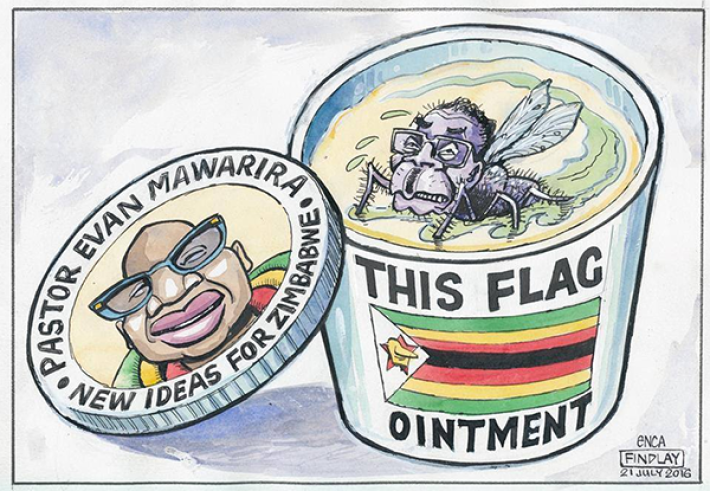 Zimbabweans are angry and deeply skeptical of their own politics. A government of national unity in place from 2009 to 2013 gave them a chance to catch their breath after unprecedented state-sanctioned violence under longtime president Robert Mugabe brought the country to its knees in 2008. But the transitional power-sharing accord did little to improve the lot of the average Zimbabwean.

Now, nearly three years after the elections that swept Mugabe’s Zimbabwe African National Union–Patriotic Front (ZANU-PF) back into power as a single party, Zimbabweans are again facing a downward economic spiral and increasing state-sponsored intimidation and violence. And unlike in previous years, when Zimbabweans could cross borders into Botswana or South Africa with little difficulty, there is no longer anywhere to run.

Three developments have revealed or helped stoke public frustration over the past few weeks: a ban on imported foodstuffs and household commodities that led informal traders, who are essential to the functioning of Zimbabwe’s economy, to riot; a plan to introduce “bond notes” to serve as de facto currency at a time when prices of basic goods are rising and U.S. dollars are in short supply; and a series of wildcat strikes and protests led by unpaid civil servants, taxi drivers fed-up with extortion at roadblocks, and urban citizens tired of corruption, poverty, and inequality.

As Zimbabweans take to the streets and to the airwaves, they should consider the evolving role of social media in protest mobilization, and they should take note of rapid shifts in the political and security structures that have effectively controlled Zimbabwe for the past 36 years.

Last month, the government responded to strikes and protests by temporarily shutting down telecommunications services, including the popular mobile application WhatsApp, which many Zimbabweans use to communicate and organize outside the control of the state.

These government-sanctioned communications shutdowns began when citizens started mobilizing against government corruption, economic failure, injustice, and poverty under various hashtag campaigns, such as #ThisFlag and #Tajamuka. Online activism is difficult for the government to monitor, but easy to shut down. The closures follow a disturbing regional trend, with governments in Burundi, the Democratic Republic of Congo, and Uganda all having shut down internet service during protests or elections in recent years.

The Postal Telecommunications Regulatory Authority of Zimbabwe (PORTAZ) has since issued a warning against “gross irresponsible use of social media and telecommunication services,” and stated that “anyone generating, passing on or sharing such abusive and subversive materials which are found tantamount to criminal behavior will be disconnected and the law will take its course.” It has offered no criteria on what actions would be considered “subversive.”

Meanwhile, numerous activists have disappeared, only to turn up days later in police stations or courts facing trumped-up charges. However, these disappearances and detentions, estimated at some 300 to date, have not deterred Zimbabweans who are driving the new protest movement. At activist pastor Evan Mawarire’s July 13 bail hearing, Zimbabweans draped in the national flag brushed past water cannons and police in riot gear surrounding the Magistrates Court in Harare, singing and chanting slogans and praying in the street outside.

Still, if the social media activists and average citizens who are now taking to the streets wish to bring about genuine political and economic change in their country, they must also work with established civil society groups and opposition political parties. Social media activism, as powerful as it is, is no substitute for sustained, grounded, and well-organized political activity. Among other thorny political tasks, prodemocracy activists must isolate authoritarian leaders from their bases of support in the state and society.

On July 22, the Zimbabwe National Liberation War Veterans Association, a key ZANU-PF constituency that previously helped to drive Zimbabwe’s notorious land expropriation policy and to intimidate Mugabe’s critics, formally abandoned the president. This is a serious blow to him and to the ruling party.

In fact, over the past year, factionalism has split ZANU-PF, spilled out into the open, and resulted in a mass purge of party stalwarts. At the same time, the dominant Morgan Tsvangirai faction of the opposition Movement for Democratic Change (MDC-T) has suffered a similar fate, enduring its own significant split in 2014, with the departure of Tendai Biti, among others. Tsvangirai’s June announcement that he is suffering from colon cancer has sparked further internal rifts. Despite the struggles the party has faced, however, MDC-T retains significant grassroots support.

A new political party has emerged since the ZANU-PF purges. While it has yet to test its electoral strength, it could significantly alter Zimbabwe’s political landscape. Former ZANU-PF vice president Joice Mujuru and liberation veteran Rugare Gumbo launched People First Zimbabwe (ZPF) in March 2016. The party has quickly established structures in all provinces, and maintains the support of some heavy hitters among current and former ZANU-PF officials. ZPF is also widely believed to be engaging with smaller political parties, including Biti’s People’s Democratic Party and the Zimbabwe African People’s Union, to form a common platform ahead of 2018 elections. While Mujuru enjoys considerable popular support, the new party would likely struggle to win elections outright without the cooperation of Morgan Tsvangirai and the MDC-T.

In fact, if MDC-T and ZPF are unable to agree on a common platform to challenge and defeat ZANU-PF in 2018, the war veterans could become kingmakers. Prodemocracy and human rights activists must therefore engage war veterans, especially the Zimbabwe National Liberation War Veterans Association, and the more progressive war veterans’ movement, the Zimbabwe Liberators Platform, to find common ground and promote the liberation values on which Zimbabwe was founded. War veterans may also provide a critical check on the security sector, as many of those currently in command could be influenced by former comrades.

The role of Zimbabwe’s security forces, particularly military and intelligence personnel, is critical to any future transition of power. The security sector is highly entrenched in Zimbabwe’s politics and economy, and remains staunchly pro-ZANU-PF. Although succession battles among various ZANU-PF factions have been splitting the military, the extent of the damage remains unclear.

No matter what happens next in the struggle among the various political parties and their internal factions to take control of Zimbabwe, the security apparatus is highly likely to focus on protecting the current president, and the next president, as well as their political and financial interests. The people of Zimbabwe may find that they will need to challenge not just the political leadership, but also the securocrats, if they hope to effect a genuine and substantive democratic transition.

This should provide the country’s protesters with an added incentive to set aside their well-earned skepticism and work with experienced activists, politicians, and parties to achieve the shared goals of freedom and prosperity.