With Sirleaf Stepping Down, Liberia Heads for Pivotal Elections

The next president could strengthen democracy in the country, or drag it back into old patterns of corruption and violence. 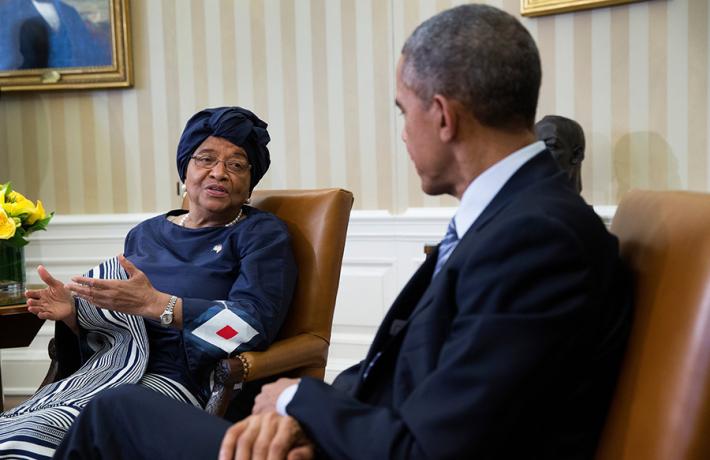 The next president could strengthen democracy in the country, or drag it back into old patterns of corruption and violence.

On October 10, Liberians will vote in historic elections, heralding the first peaceful transfer of power between democratically elected leaders since 1944. While the elections are expected to be peaceful, there are some potential pitfalls, and the mixed legacy of President Sirleaf suggests that whoever wins will still have much to do if Liberia’s democratic development is to continue.

The significance of the vote

From 1989 to 1997 and 1999 to 2003, Liberia was engulfed in protracted and bloody civil wars that reflected societal divisions dating back to the 1800s. Hundreds of thousands of people were killed, countless other atrocities were committed, children were enlisted as fighters by all sides, and most of the country’s infrastructure was destroyed. Given the duration and scope of these wars, virtually every Liberian was left with physical or psychological scars.

Sirleaf, who became the country’s first postwar president in January 2006, was tasked with rebuilding the country and repairing trust among its citizens. She won reelection in 2011, but by adhering to term limits this year, she has resisted the temptation of indefinite rule that ensnared her contemporaries in Uganda, the Democratic Republic of Congo, and Rwanda—all postconflict leaders who have clung to power rather than passing the baton. Sirleaf’s commitment to stepping down will create an expectation of competitive elections and a peaceful transfer of power, helping to solidify Liberia’s democracy.

The circumstances of the 2017 elections present a number of potential difficulties. For example, at the time of writing there are 20 candidates contesting the presidential election, all but guaranteeing that a runoff will be needed. While the electoral commission has experience in handling long ballots (the 2011 elections featured 16 presidential candidates), the political stakes will be high between the two rounds, as those in the runoff vie for the eliminated candidates’ supporters. It will be vital to ensure a calm and orderly campaign climate ahead of the runoff vote.

Another pitfall lies in the candidates’ backgrounds. Because Sirleaf herself played a role in the civil wars, her administration ignored the Truth and Reconciliation Commission’s recommendation to limit the ability of those involved in the conflicts to run for office. As a result, while former dictator Charles Taylor is still locked away in an international prison, his ex-wife, Senator Jewel Howard-Taylor, has been named as the vice presidential candidate on the ticket of popular footballer George Weah of the Congress for Democratic Change. Weah had previously been a serious contender for the presidency in 2005 and the vice presidency in 2011.

Howard-Taylor is not the only candidate with a checkered past. Another, former rebel commander and current senator Prince Johnson, is perhaps best known for a video in which he presided over the 1990 torture and mutilation of President Samuel Doe while sipping a beer; Doe was eventually murdered by Johnson’s fighters. It is bad enough that these figures from the darkest episodes of Liberia’s history are elected lawmakers. Their ascension to the presidency could reopen old wounds and seriously damage the credibility of the office.

President Sirleaf has been celebrated for restoring stability in Liberia, and her efforts have been acknowledged with a Nobel Peace Prize. The economy has grown under her leadership, and she has helped establish human rights and gender equality as recognized if imperfectly upheld norms. However, her heavy-handed management of the Ebola crisis threatened civil liberties, and corruption and nepotism have flourished during her tenure.

Moreover, Sirleaf never made reconciliation a priority, leaving some Liberians to wonder how the perpetrators of unspeakable crimes can be allowed to prosper even as many citizens still cannot send their children to school or put food on the table. The outgoing president may have laid the foundations for a peaceful and democratic Liberia, but the next president must tackle the remaining challenges.

While fair and peaceful elections in the coming weeks will be a significant milestone, the winner will need to do more to stem corruption and expand Liberia’s economy so that all citizens can benefit. Furthermore, legislation such as the Land Reform Act must be passed to ensure that lingering causes of conflict are addressed and citizens’ rights are not trampled in favor of corporate-led development.

Sirleaf’s achievements, particularly her commitment to honor the constitution and make way for new leadership, have raised the expectations of the Liberian people. Peace and stability are essential, but they are no longer enough. The upcoming transfer of power should be taken as an opportunity to move the country further along the democratic path, with a focus on improving transparency, the rule of law, and equality of opportunity for all Liberians.