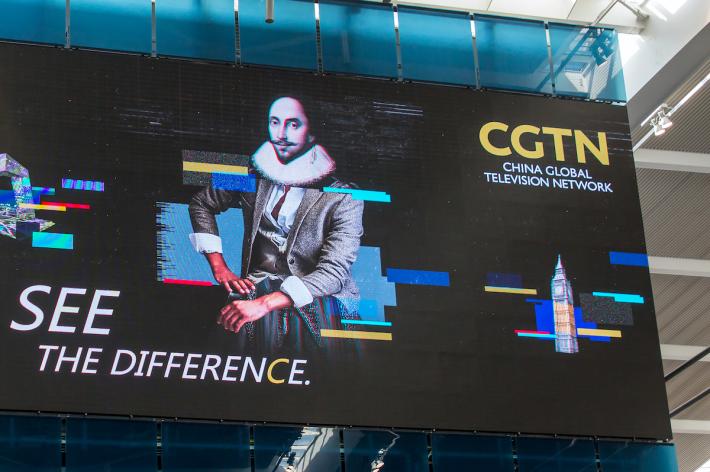 From the Chinese Communist Party mouthpiece People’s Daily’s prolific antipoverty propaganda push in over 40 countries, to Chinese hackers using Facebook to target Uyghurs abroad, Beijing has impacted global media in several ways this past month. Regulators across Asia, Europe, and Australia pushed back against Chinese media and technology over human rights and security concerns, and in Taiwan, a social media campaign went viral in response to a Chinese ban on pineapples.

On March 17, the Communist Party mouthpiece the People’s Daily touted its successful efforts in placing propaganda pieces about Xi Jinping’s antipoverty campaign and the Chinese development model in newspapers around the globe between March 5-11, during Chinese annual legislative meetings. The paper claimed it had placed over 750 articles in 12 languages in nearly 200 media outlets in over 40 countries. These included features in Brazil’s O Globo, the United Arab Emirates’ Khaleej Times, Mexico’s Milenio, Indonesia’s Media Indonesia, and Canada’s The Hill Times. The People’s Daily claimed it also “cooperated” with 15 papers to publish 25 thematic special editions; not all of the content was labelled as paid advertising or a press release. Chinese diplomats in the Maldives, Pakistan, and Tanzania also promoted the campaign on Twitter

On March 24, Facebook announced that it had taken action against hacker groups that used the platform to target Uyghurs abroad with malware links to enable surveillance. The targets, mainly based in Turkey, Kazakhstan, the United States, Syria, Australia, and Canada, were sent look-alike domains for popular Uyghur and Turkish news sites and lured to click on them by fake human rights advocacy accounts. Parts of this campaign closely resemble activity associated with Evil Eye, a previously identified threat actor that also targeted Uyghurs. A recent Freedom House report identified hacking and phishing as among the tactics deployed by the Chinese regime against Chinese exiles and diaspora communities.

Following coordinated sanctions from the European Union (EU), United States, Canada, and the United Kingdom on March 22 against Chinese individuals and entities for their involvement in human rights violations in Xinjiang, China hit back with reciprocal sanctions against the EU and UK on March 22, and March 25 respectively, as well as a state media smear campaign targeting the EU. One EU entity targeted was the Berlin-based Mercator Institute for China Studies (MERICS), the largest China-focused think tank in Europe; the body was not known to be particularly hawkish or human-rights oriented, although it had published reports on problematic CCP influence in Europe. Emboldened by the sanctions, China’s Communist Youth League initiated a viral online campaign criticizing Swedish clothing company H&M for a months-old statement that it would stop sourcing cotton from Xinjiang over concerns about forced labor. The online movement led to widespread consumer and celebrity boycotts against foreign companies that spoke out against Xinjiang, and the “Support Xinjiang cotton” hashtag had over 5.4 billion views by March 26.

4. State-run China Global Television News (CGTN) back in Europe, fined in UK, under review in Australia:

After losing its UK license for being controlled by the Chinese Communist Party, CGTN received approval in France on March 4, allowing the channel to resume broadcasting across Council of Europe countries, including the United Kingdom. This approval, however, was met with what industry watchers describe as an “unusually stern” announcement regarding the rules that will govern CGTN due to the fact that it had already committed “serious breaches” of principles under French broadcasting legislation, such as “respect for human dignity as well as honesty, independence, and pluralism of information.” Industry watchers also note that while UK residents can tune into CGTN, major UK carriers are unlikely to carry it due to British media regulator Ofcom’s February ruling. Separately, on March 8, Ofcom fined the entity holding CGTN’s license £225,000 ($310,000) for airing forced confessions and biased coverage on protests in Hong Kong. For similar human rights concerns, Australian broadcaster SBS suspended CGTN on March 5 while it undertakes a review of the service.

In an atmosphere of heightened concern over Chinese meddling in India’s critical infrastructure, India announced on March 10 new rules mandating that equipment can only be procured from a government-curated list of “trusted sources.” The rules, which come into effect in June 2021, will likely ban Chinese vendors like Huawei and ZTE from playing a role in India’s expansion of its 4G services and in building the new 5G network. Similarly, according to a March 18 Financial Times report, UK intelligence agencies reportedly urged for regulation against municipal procurement of Chinese “safe city” technologies, following a Reuters investigation which revealed that at least half of London’s boroughs have bought and deployed Chinese-made surveillance systems. On March 23, due to data-misuse concerns, Japan’s messaging app Line stopped Chinese affiliates and contractors from accessing Japanese users’ personal information. This follows Japanese media reports that four employees of Line's Chinese affiliate had access to Japanese user information, including names and phone numbers, and Line IDs.

A social media campaign dubbed #freedompineapple went viral after Chinese authorities on February 26 announced an import ban on Taiwanese pineapples starting in March. After the announcement, Taiwan’s minister of foreign affairs issued a call for people to stand with Taiwan by buying Taiwanese pineapples, coining the hashtag that echoed last year’s #freedomwine campaign that emerged in response to China’s similarly politicized tariffs on Australian wine. While Taiwan only exports about 10 percent of its pineapple crop, the vast majority of exports have traditionally gone to China. Taiwanese president Tsai Ing-wen joined the campaign in a tweet that received over 3,000 shares, calling for people to purchase local pineapples and denouncing the ban as not based on “health or fair trade,” as China had claimed. Taiwanese consumers quickly responded to the campaign and within four days domestic orders of pineapples overtook amounts sold to China, with netizens sharing recipes online using the hashtag.