On Social Control, the Kremlin’s Reach May Exceed Its Grasp 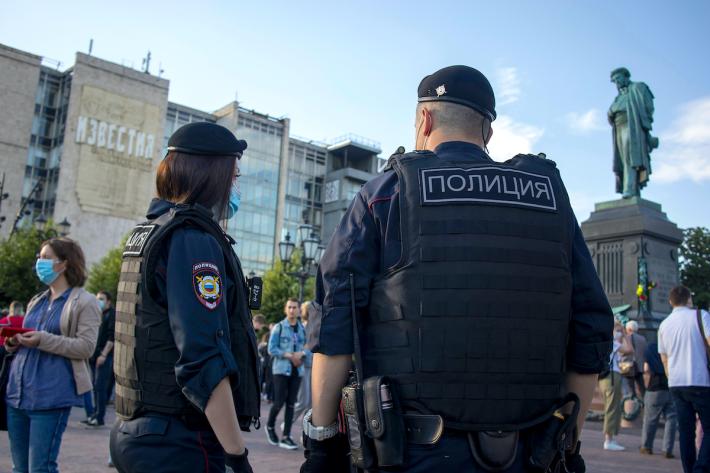 Police presence at the at a Moscow protest amid the COVID-19 pandemic. Image credit: Elena Rostunova / Shutterstock.com

Eager to avoid any repetition of last year’s protests and give itself a public relations boost ahead of the recent constitutional referendum, the Kremlin has responded to the coronavirus pandemic by increasing surveillance measures and curtailing open discussion of sensitive topics. Yet thus far, the effort has been hit or miss, pointing to the state’s fundamental inability to fulfill its ambition of seamlessly controlling the information space.

One important concession to reality came last month, when after two years of trying unsuccessfully to block the messaging application Telegram, the state gave in and lifted the official ban. Even during the prohibition, Russia’s own bureaucrats and state media had continued to utilize the app. The state was also forced in March to delay its implementation of the “sovereign Runet” project, which seeks to limit access to uncensored information by walling off Russia’s online space from the international internet. The Herculean effort was a lot to ask of a state apparatus that remains mired in overlapping health and economic crises. It is now unclear when the project will be operationalized and, indeed, what Runet will look like for the average user.

These concessions have not stopped the state from taking more targeted and low-tech measures against free speech online. As the pandemic spread within Russia, citizens began to voice their concerns on social media platforms. The authorities reacted by filing criminal charges under the pretext of suppressing “fake news” about the virus. In truth, the punitive effort began long before COVID-19 arrived. According to a June report from Agora, a leading human rights organization, the authorities had launched more than 200 criminal cases against individuals who posted information that differed from official statements since March 2019—the equivalent of a new case every two days.

A proving ground for surveillance tools

The Russian state may lack the capacity to follow through on major technological endeavors like Runet, but it has taken advantage of the pandemic to experiment with new surveillance tools, often using Moscow as its laboratory.

In January, the authorities in the capital announced that they had equipped over 100,000 surveillance cameras with sophisticated facial recognition technology, and in March they said the system would help to enforce quarantines. However, it had been in preparation for many months, coming in the wake of some of the largest street protests in years. The nascent technology was already being employed to monitor civic engagement in 2019, and expanding such capabilities in Moscow will undoubtedly prove useful beyond the pandemic.

Separately, the state has implemented “Social Monitoring,” a location-based mobile application, to track those who are sick with the virus. Muscovites diagnosed with COVID-19 are obliged to check in with the authorities through the app. Just over a month after the system was launched, 54,000 fines had been issued in the city, often erroneously. Among other egregious mistakes, authorities have fined the wrong twin for violating quarantine. Mass indignation over being wrongly penalized has led to the creation of a Facebook group, “Fined for Being Sick.” Though flawed and deeply unpopular, the technology appears to be lucrative. By May 20, the app had solicited $3.1 million in fines. It is also part of a broader initiative promoting Russian-made apps, whose ability to surveil users’ movements has been made readily apparent.

The final digital surveillance measure unveiled during the pandemic is the QR code system. In Moscow, residents who are 14 and older are required to download a QR code onto their phones in order to inform the government of their planned movements. The system, first rolled out in the Moscow region, will be extended to 21 regions of Russia. Worryingly, the app will allow the authorities to obtain personal information through a simple scan. It is not a stretch of the imagination, given recent Russian history, to assume that the authorities will continue to utilize the tool after the health crisis or force residents to install the application in a future emergency.

The limitations of a dysfunctional police state

The Russian state has been engaged in a prolonged crackdown on the free flow of information, and its efforts have increased in response to COVID-19. The newest surveillance tools are being rolled out in Moscow, but will by no means stop there. The Kremlin is already extending its gaze across the country, most recently by installing facial recognition cameras in schools.

But given the regime’s limited resources, endemic graft, and previous setbacks to comprehensive national surveillance programs, it is unlikely that Russia will become a model digital-age police state in the near future. Instead, the implementation of new projects—particularly the resulting state contracts—will be used to curry personal favor among the elite, and the expanded surveillance tools associated with COVID-19 will continue to be utilized selectively to deter open discourse and support politically motivated prosecutions.