In South Africa, Local Activists Are ‘Dealing with a Government in Denial’ 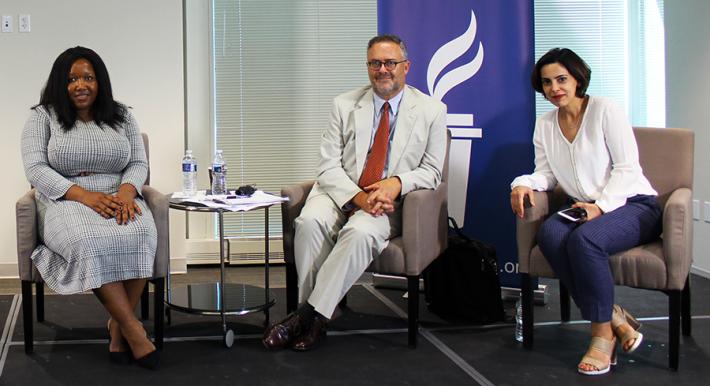 Thandeka Kathi, a senior researcher for South Africa’s Social Justice Coalition, works to secure fundamental rights for the millions of South Africans living in “informal communities”—the unincorporated areas that often have few if any basic services. She spoke with Freedom House before addressing the Mark Palmer Forum for the Advancement of Democracy.

Freedom House: Working on behalf of what are generally very poor communities, how do you prioritize between securing their basic economic rights and securing their political rights?

Kathi: I don’t think the two are exclusive. Political rights are meaningless if you don’t have anything to eat. Or if you’re relieving yourself in an open field. Most people don’t have access to basic sanitation. And this is 22 years after the coming of democracy, but we still have issues like this.

Which should come first?

Kathi: I can’t find that one comes first. If I don’t have freedom of movement, freedom of association, if I can’t choose my president or have human rights, then how am I able to enjoy economic freedom? The big problems are youth unemployment, crime, service delivery, access to clean water, access to basic sanitation.

What is meant by ‘informal communities’? They’re something other than cities or townships.

Kathi: It’s weird that they’re still called “informal,” because most of them have existed for over 30 years. They’re where people have moved near established areas and built their own structures, so those shacks become the informal areas. There’s usually no formal road, there are usually no street names, no services, no infrastructure, no public transportation. In Khayelitsha [a partially-informal area west of Cape Town], the population is 400,000 to 750,000 people.

What does the Cape Town government offer there?

Kathi: We’re dealing with a government that is in denial about the issues that people face. Are you aware of potty training? So the government provides little pots like that, and they consider that to be “sanitation.” The issue with that is that in one shack there might be 10 people. So there are cultural issues and there is such an infringement of the right to human dignity. You find that people would rather use the bush. And the government’s response, time and again, is that, “No, we provide sanitation technology. We provide 100 percent access.” But is it really?

How does one solve these problems?

Kathi: Thanks for the simple question! When it comes to youth unemployment, the major issue is that people don’t have skills, so it’s structural unemployment in the sense that the skills that people do have don’t fit the jobs that are available. People are prepared to be employees but not prepared to be entrepreneurs, for instance. Focusing more on small businesses, and researching more into what’s needed in the global economy, would help make sure that when young people graduate from high school or university they don’t face these problems.

For access to sanitation, we need to make sure that we do not offer people undignified, temporary sanitation. You need to ask what kind of toilets they need and want, instead of coming to a community and telling them. You need to consult first. Where should the toilets be? How far away should they be? Consult first.

With crime, police resources are not well allocated. You find that affluent areas have more police than poorer communities.

Why have the problems gotten larger rather than smaller in 22 years?

Kathi: During President Mandela’s term, it was all about reconciling the country after apartheid. When President Mbeki came in, the issue was about empowering South Africa’s economy, helping the previously disadvantaged communities, and making sure they had access to markets. When the recession came, South Africa was as devastated as most countries. So I don’t know why we haven’t been able to do more in 22 years, except maybe lack of political will—maybe it’s just not there. Or if it’s there, it’s mismanagement of funds. And lack of consultation, once again, and not investing in youth.

What kind of investment should the government make?

Kathi: Access to education from an early age would be key, and not just education for those who can afford it. Access to nutritious meals is important too, because hunger is a problem. We also need environments that are safe, because we also have one of the highest crime rates in the world. So safety is an issue.

What are the top priorities for the Social Justice Coalition?

Kathi: We have a local government program, which is involved in the sanitation campaign, to get people what they want for basic sanitation. There’s also the budget campaign, to educate about the municipal budget of Cape Town, so that the poor can get an equal share of services. And then we have the safety program to build up police resources and police visibility in the community.