Sri Lanka’s Democracy Hangs in the Balance after ‘Coup Attempt’

The president’s moves to replace the government and dissolve Parliament have been denounced as unconstitutional. 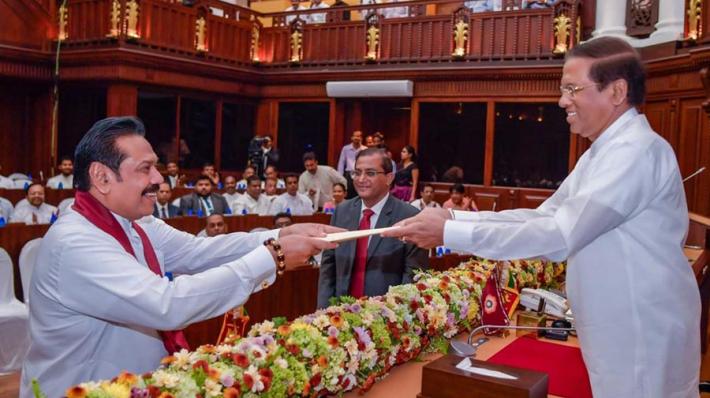 The president’s moves to replace the government and dissolve Parliament have been denounced as unconstitutional.

In the exchange below, Freedom House asked a group of Sri Lankans with experience and training in government, law, academia, and public policy to explain the context and implications of the country’s current political crisis. The answers represent the consensus view of the group, which asked to remain anonymous.

What set off this crisis, and how has it unfolded so far?

On October 26, President Maithripala Sirisena attempted a coup d’etat byappointing Mahinda Rajapaksa, his predecessor and a current member of Parliament, as prime minister. Because this appointment was unconstitutional, the sitting prime minister, Ranil Wickremesinghe, refused to acknowledge his removal. The president then suspended Parliament, and his supporters began efforts to convince MPs who backed Wickremesinghe to change sides.

These efforts did not succeed. Wickremesinghe retained the support of his own party, the United National Party, as well as the main parties representing the Tamil and Muslim minorities. A total of 116 members of Sri Lanka’s 225-seat Parliament wrote to the speaker and requested a vote to establish who commands the confidence of the body. The speaker subsequently wrote to the president, recognizing Wickremesinghe as prime minister, criticizing the suspension, and calling on Sirisena to summon Parliament immediately.

Within a few days it was clear that Sirisena and Rajapaksa would not be able to secure the majority needed to win a vote in Parliament and legitimize the latter’s appointment. As a result, the president signed papers to dissolve Parliament on November 9. However, under reforms adopted in 2015, which Sirisena himself had spearheaded, the Sri Lankan constitution only allows a president to dissolve Parliament four and a half years after the previous general election, or before that if two-thirds of MPs agree to a dissolution. Since neither condition was met in this case, the order to dissolve was unconstitutional. On November 13, the Supreme Court responded to a petition from Wickremesinghe’s supporters by blocking the presidential order until it could issue a final judgment in December. Parliament reconvened the next day, and a majority passed a motion of no confidence against Rajapaksa’s purported government, but Rajapaksa supporters said the vote was procedurally invalid.

Sri Lanka is Asia’s oldest democracy, enjoying universal suffrage and legally mandated transfers of power since 1931. This wholesale violation of the constitution—especially in relation to a transfer of power—is unprecedented. Rajapaksa’s authoritarian behavior in office and lack of contrition for past abuses suggest that any regime he leads will trample on democracy and freedom. The nature of the attempted coup itself, which has involved pro-Rajapaksa thugs breaking into state media institutions and the withdrawal of security for Wickremesinghe and other ministers, has already had a chilling effect. Media self-censorship has resumed.

Why did President Sirisena suddenly pivot to ally himself with Rajapaksa?

The reasons behind President Sirisena’s decision are unclear. There was evidence of personality and policy clashes between himself and Prime Minister Wickremesinghe, as well as disagreement between them on how to respond to corruption and human rights violations by the previous regime. It was also clear, after local government polls in February, that Rajapaksa was regaining popularity. Sirisena may have felt that making Rajapaksa prime minister would improve his chances of winning a second term as president. Further, Sirisena is motivated by a desire to prevent a split in his party, as many members have remained loyal to Rajapaksa since Sirisena unexpectedly challenged and defeated him in the 2015 presidential election. Rajapaksa has since organized a new party that threatens to draw away defectors.

Are Sri Lanka’s state institutions strong and independent enough to uphold the constitution?

Sri Lanka’s institutions—including the courts, civil service, police, and state media—were weakened by several years of authoritarian governance under Rajapaksa. While recent years have suggested a limited strengthening of these institutions, and the November 13 Supreme Court ruling is a positive sign, it is unclear whether they will ultimately stand firm against Sirisena’s repeated violations of the constitution. Sri Lanka’s democratic culture, and widespread dissatisfaction with the government of Sirisena and Wickremesinghe, may be what decide this crisis.

What are the most likely political outcomes to the crisis?

There are several possible outcomes. Following the Supreme Court’s decision to suspend Sirisena’s attempt to dissolve Parliament, the body reconvened on November 14. In the face of disruptions from supporters of Rajapaksa, a voice vote confirmed that a majority of MPs did not have confidence in him. However, his side disputed the procedural validity of the vote.

These events have weakened the president, and the defeat in Parliament has led to a loss of face for Rajapaksa. Nonetheless, Wickremesinghe’s party is itself unpopular and weak, and even if he remains in office, he will find it hard to govern as long as Sirisena remains antagonistic. Moreover, there is considerable public support for Sirisena’s actions despite their unconstitutionality, with Sinhala-language newspapers focusing on their potential to bring about stronger government and a way out of Sri Lanka’s economic troubles.

It is likely that Wickremesinghe will have to strike a deal with Sirisena to hold early provincial and parliamentary elections in exchange for cooperation in government. The interim period would allow the two sides to gear up for a test of support among the people. Rajapaksa is likely to win a substantial majority in both elections, unless Wickremesinghe’s party and civil society groups concerned about a return to authoritarian rule are able to mobilize opposition around an acceptable alternative candidate for prime minister.

If Rajapaksa returns to government, what are the implications for national reconciliation, minority rights, and democracy in general?

Mahinda Rajapaksa’s record on minority rights is well known—the allegations include war crimes, complicity in ethnic riots, and widespread discrimination. Since losing power, he has expressed no contrition for his past actions or policies. Senior figures associated with Rajapaksa have been seen recently with extremist Buddhist monks, instigators of pogroms have been released from detention, and the president devoted a key part of his main address following the coup to homophobic jibes.

What is the general public attitude toward China’s influence in Sri Lanka, and the idea that China may be behind Rajapaksa’s potential return to power?

Sri Lankans welcome the infrastructure built with Chinese investment and concessionary financing. However, they are also very concerned about the lack of transparency, allegations of corruption, and poor project selection that often accompany Chinese-financed infrastructure deals. There is no reliable information to suggest that China is behind the current crisis. Most observers think that it is the product of domestic political maneuvers.

What can the international community do right now to support democracy and the rule of law in Sri Lanka?

First, no foreign government has recognized the unconstitutionally appointed government officials, and this policy should continue, especially with regard to Rajapaksa and his purported cabinet of ministers.

Second, foreign leaders should openly condemn the attempted coup and the order to dissolve Parliament, highlighting their unconstitutionality and calling for the courts and the Election Commission to uphold the constitution.

Finally, governments interested in supporting democracy in Sri Lanka should deny the visa requests and freeze the assets of those involved in the attemptedcoup d’etat.