Taking No Chances, Thailand's Junta Locks Down the Internet ahead of Elections

In the leadup to elections, Thailand's junta has censored online content in addition to arrests and prosecutions for online activity. 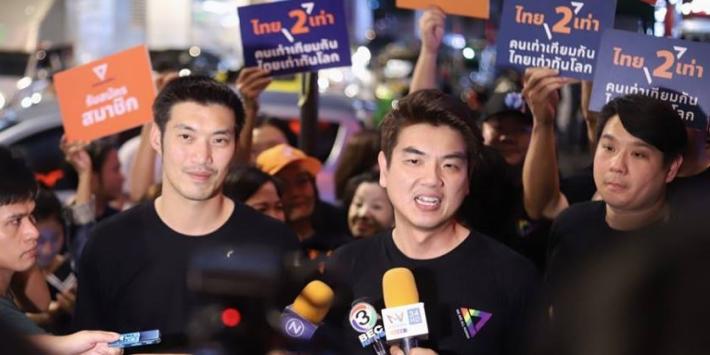 Leaders from Thailand's opposition party Future Forward give an interview to reporters in the leadup to the March 24th elections. Credit: Flickr/Creative Commons.

After repeated postponements, Thailand will hold general elections on March 24—the first vote since high-ranking military officers effected a coup d’état in 2014 and installed themselves as the National Council for Peace and Order.

The elections are hardly a gamble for the junta. A new constitution, drafted under the generals’ supervision, provides the structural means for the military to maintain political dominance while tolerating superficially democratic processes. To control the government, a party must secure a majority of seats in the two houses of parliament combined. In the lower chamber, the House of Representatives, a total of 350 constituency seats and 150 party-list seats will be filled through direct elections. But in the Senate, the junta will appoint all 250 members for the first five-year term, and six seats will be held by senior military officials. With the Senate’s support guaranteed, pro-junta parties such as Palang Pracharath will need to capture only a third of the lower house to select the prime minister. This bodes well for coup leader Prayuth Chan-ocha, the incumbent prime minister and leading candidate of Palang Pracharath.

Despite the tailor-made constitutional structure and weakened electoral laws, the junta is moving aggressively to squelch support for the opposition. For example, the politicized Constitutional Court recently dissolved Thai Raksa Chart, an opposition party affiliated with ousted former prime minister Thaksin Shinawatra, after Ubolratana Rajakanya, the maverick sister of Thailand’s king, attempted to run as the party’s candidate for prime minister.

But the most telling sign of the junta’s determination to silence dissenting voices ahead of the elections is its onerous regime of restrictions on social media, as outlined in Freedom House’s Internet Freedom Election Monitor.

In January, the Election Commission of Thailand released strict guidelines that limit parties’ use of social media. Parties must register social media pages with the commission or be subjected to fines and prison terms. The rules also include penalties for sharing or “liking” defamatory content or spreading “false information.” If found in violation, parties can be dissolved and candidates can be jailed or disqualified from politics. The rules have already caused candidates to self-censor; some have even opted to delete their accounts entirely. Others have hired legal teams to ensure that their posts are compliant, reallocating resources that could be used to bring citizens into the political process.

The Thai authorities also commonly use removal requests to censor political content, and this has continued into the election period. The Election Commission set up a “war room” with a half-dozen monitors reviewing and flagging content deemed to be in violation of the guidelines. Requests have then been sent to platforms to remove posts that “spread lies, slander candidates, or use rude language.”

Arrests and Prosecutions for Online Activity

The junta has an arsenal of repressive laws with which to target opposition leaders, activists, and journalists, most notably the Computer-Related Crime Act (CCA). Despite recent amendments, the CCA includes a number of broad and vague provisions that allow for politically motivated prosecutions. For example, it prohibits the dissemination of “false” and “distorted” information, and criminalizes content that the government deems to harm national security. Internet users are also routinely charged for lèse majesté, or insulting the monarchy.

At least five people have reportedly been charged under the CCA with sharing false information, endangering national security, and defaming officials in connection with the elections. Thanathorn Juangroongruangkit, the popular leader of the newly established opposition Future Forward Party, is facing charges under the CCA for “uploading false information” after he criticized the junta’s efforts to maintain power on Facebook in June 2018. In March, a junta official filed a complaint with police accusing Pongsakorn Rodchompoo, deputy leader of the Future Forward Party, of violating the CCA. Pongsakorn had shared an article on Facebook about a member of the military supposedly buying $377 coffee cups, though he quickly deleted the post when he discovered that it was false. Individuals charged under the CCA face up to five years in prison if convicted.

Keeping Voters in the Dark

Freedom House has long designated Thailand’s online environment as Not Free, and conditions seem at risk of further deterioration. In a country where a reported 74 percent of the population uses social media, platforms such as Facebook, Line, Twitter, and Instagram are fundamental to many people’s everyday lives. The junta’s targeting of social media suggests that it understands the unique role digital tools can play in opposition forces’ efforts to disseminate information and reach out to voters. The Future Forward Party has gained traction in part by using Line to build a following at the village level. It is also worth noting that the Election Commission’s guidelines are likely to have a disproportionate impact on younger voters, who use social media more regularly and may be more inclined to support progressive parties.

The military-dominated government’s controls on social media ensure that even within the narrow space for political competition allowed by the new constitution and related electoral laws, Thai voters will not have access to the open debate and discussion necessary to make an informed choice. The elections were never going to be free or fair enough to permit a democratic change in leadership, but they might have served as a roughly accurate barometer of public views. With the information environment so tightly circumscribed, even that gauge will be severely distorted.

Taking No Chances, Thailand's Junta Locks Down the Internet ahead of Elections by Allie Funk, Research Analyst, Freedom on the Net, was originally published on Just Security