The rise of Islamic extremism in the Balkans is just one symptom of the long-term decay of democratic governance. 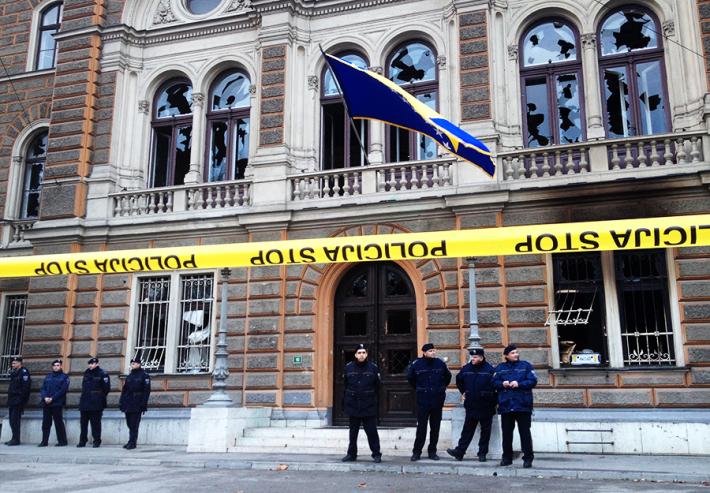 The rise of Islamic extremism in the Balkans is just one symptom of the long-term decay of democratic governance—a fact that many local leaders would like the world to ignore.

The American (and European) pundit classes have a habit of (re)discovering the Balkans on a seasonal basis. Articles on the “next Balkan war” are evergreen, and nary a global tragedy or catastrophe has wanted for a southeast European dimension.

The subsequent analysis, however, is typically opportunistic, hyperbolic, and uninformed. Moreover, these accounts routinely play into the cynical narratives of the actual agents of chaos in the region. Worst of all, they complicate the work of serious observers attempting to address the structural problems of governance in the Western Balkans, problems that defy neat, alarming headlines.

Consider the New York Times’ recent unearthing of the disproportionately large number of young men from Kosovo (and Bosnia and Herzegovina) who have traveled to the Middle East to join the ranks of the Islamic State. The reporting itself is accurate, and even the editorial board’s critique of Saudi Arabia’s duplicitous charity among southeastern Europe’s Muslims is well taken. The problem is in what the Times and Western policymakers more broadly cannot bring themselves to address.

The danger of Islamic radicalization in the Balkans is not new as such. The English-language news portal Balkan Insight has been covering the Islamic State’s threat to southeastern Europe since at least 2013. And scholars have spent decades carefully examining the evolution of Islam in the Balkans, distinguishing facts from fiction.

Stronger extremist currents have emerged in recent years, and the movement of radicals from the Balkans to the Middle East and back is no doubt a threat to the region, and to Europe as a whole. Yet any informed investigation of the state of southeastern Europe’s Muslim community will quickly conclude that the region does not have an Islamist problem—it has a governance problem.

As I recently wrote for the European Council on Foreign Relations, virtually the whole of the Western Balkans is in a state of existential political turmoil, and the situation is little better in the surrounding countries, from Hungary to Turkey. But in Kosovo, Bosnia and Herzegovina, and Macedonia, three states with some of the most significant populations of Muslims in the region, the crisis of governance is a cancerous, long-term phenomenon. In fact, these countries have been experiencing the dissolution of democratic institutions and norms, the growth of endemic corruption, and deepening authoritarian tendencies among local elites for the better part of two decades.

The political and economic situation in Kosovo has deteriorated so dramatically that citizens are simply leaving. Amid the stream of refugees from Syria and Afghanistan entering Europe, thousands more have come from Kosovo. And much the same is true of the region as a whole.

Decades of partisan and nationalist conflict amid ineffectual European and American policies have suffocated the hopes of ordinary citizens. Youth unemployment is staggering across the Balkans. Yet as recent events in Macedonia have shown, recalcitrant political elites are still more committed to preserving their own power—even at the cost of violence—than to addressing the needs of citizens.

We know that such desperate and hopeless societies quickly become fertile recruiting grounds for extremists of all sorts. In Serbia, for instance, it is the country’s robust far-right movement that has attracted disaffected young men. Nearly half a million votes were cast for an alliance of new and old far-right parties in the country’s recent parliamentary elections. Far-right and neofascist “volunteers” from Serbia have also joined the separatist cause in eastern Ukraine—in the name of Orthodox Christian, not Islamic, brotherhood.

Leaders in Belgrade, Pristina, Skopje, and Sarajevo are not unaware of their citizens’ disaffection. From the torching of government buildings in Bosnia and Herzegovina in 2014 to the ongoing antiregime protests in Macedonia today, politics has spilled out into the streets in the Balkans. But for all the “European” rhetoric of local leaders, it has been their deliberate choice to keep regional politics provincial, patriarchal, and patrimonial, because this has kept them in power.

Men like Bosnia and Herzegovina’s Bakir Izetbegović or Kosovo’s Hashim Thaçi or Macedonia’s Nikola Gruevski are not Brussels’ or Washington’s allies in the fight against Islamic extremism. After all, it is they who are responsible for the collapsing institutions of southeastern Europe’s nascent democracies in the first place. And it is they who stand to gain the most if international policy in the region shifts away from promoting democracy and good governance and toward an emphasis on counterterrorism and short-term security.

To be clear, the security situation in the Western Balkans has deteriorated, but not because of the Islamic State. Rather, the Islamist militants (much like Russia) are in the region to play spoiler, and to cause expensive brushfires for Western powers that have for too long passively observed the collapse of southeast European democracy.

If the European Union and the United States want to seriously combat the threat of Islamic radicalism in the Balkans, they must studiously return to the task of democracy promotion in the region. Anything else is dealing merely with symptoms rather than root causes.

Jasmin Mujanović holds a PhD in political science from York University. He is a frequent commentator on southeast European and international affairs in the scholarly, policy, and popular press.