This week’s attacks and hostage-takings in Paris are the latest in a series of terrorist incidents in established democracies. But the overwhelming majority of terrorist violence continues to take place in countries that lack democratic governance. 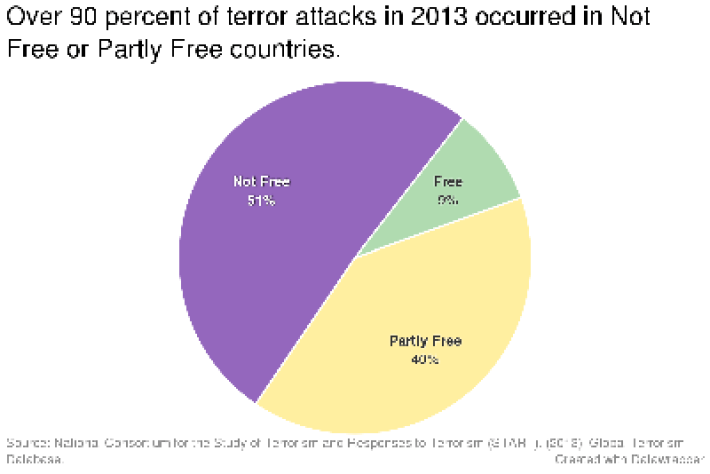 By Bret Nelson and Tyler Roylance 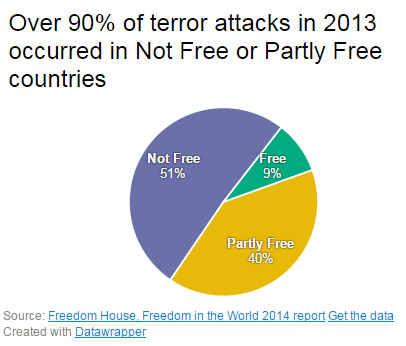 This week’s attacks and hostage-takings in Paris are the latest in a series of terrorist incidents in established democracies. But the overwhelming majority of terrorist violence continues to take place in countries that lack democratic governance.

To the extent that democracies—including those with significant or majority Muslim populations—do suffer from terrorism, the incidents can usually be linked in some way to a country currently under authoritarian rule or ravaged by the collapse of a dictatorship.

Militants can be dispatched to free countries by terrorist groups based in misgoverned states or post-authoritarian warzones. Local citizens can travel to such areas to receive training and indoctrination. And susceptible people can be remotely inspired or manipulated by foreign terrorists through online media and direct communication. In some cases this process unfolds amid social tensions raised by large influxes of refugees and other migrants fleeing undemocratic countries. A number of these factors appear to have played a role in the French attack.

For evidence that authoritarian states create an enabling environment for terrorism, one has only to look at the location and origins of the major terrorist groups active today. The Islamic State, for example, metastasized amid the Syrian dictatorship’s war with opposition rebels and the sectarian divisions sown by increasingly authoritarian Iraqi prime minister Nouri al-Maliki. An affiliate of the group has emerged in Egypt, where coup leader Abdel Fattah el-Sisi is cracking down on all forms of dissent. And Boko Haram has radicalized and expanded its reach amid extrajudicial killings and other ineffective tactics by the corruption-plagued Nigerian security forces.

Given this reality, the most effective way for democracies to combat terrorism at home over the long term may be to foster democratic governance abroad.