Threats to the US Midterm Elections Have Been Building for Years

The festering problems that erupted after the last presidential election are still unresolved. 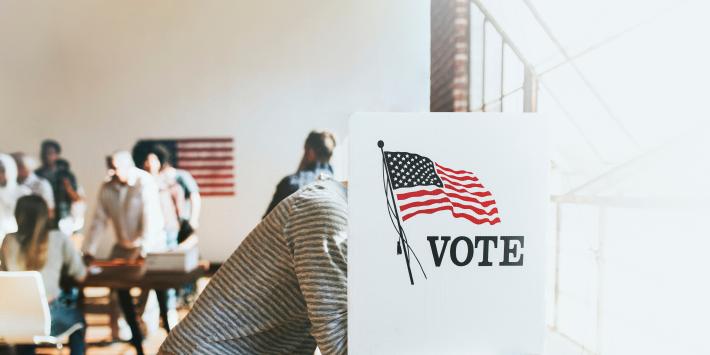 As the United States heads toward midterm elections on November 8, the political environment remains haunted by the coup attempt that culminated in a violent attack on the Capitol in January 2021.

Social and mainstream media are overrun with narratives that preemptively cast doubt on the integrity of this year’s balloting by repeating false claims of a “stolen” 2020 election. While the courts found no credible evidence of large-scale fraud two years ago, the persistent claims have contributed to a trend in which state- and local-level election administration has grown more politicized, election officials face worsening harassment and intimidation, and some state legislatures have attempted to make voting more difficult in the name of electoral security.

But the problems threatening US elections did not begin in 2020. They are part of a much older pattern of deterioration in America’s democratic institutions that must be addressed if the country is to meaningfully advance the cause of global freedom.

The deterioration of US democracy

Through our flagship Freedom in the World publication, Freedom House has documented a significant decline in political rights and civil liberties in the United States over the past decade. In 2010, the country’s total score stood at 94 on the report’s 100-point scale, on par with other established democracies like France and Germany. In 2022, the United States still has an overall status of Free, but its total score has fallen to 83, placing it with less robust democracies like Panama and Romania.

The problems driving the decline include partisan gerrymandering, the excessive influence of special interests in politics, politicization of the judicial appointment process, and a polarized media landscape—all of which encourage extremism and thwart moderation and compromise in the public interest. The resulting dysfunction serves to further erode confidence in democratic institutions, fueling demands for antidemocratic solutions.

The United States’ troubles must also be placed in the context of 16 consecutive years of global democratic decline. Populist leaders within democracies around the world have systematically worked to undermine or dismantle the institutions meant to hold them accountable and place checks on their power. And as established authoritarian regimes escalate their repression at home and aggression abroad, they have benefited from the internal disarray among democratic powers like the United States, whose efficacy and credibility as defenders of fundamental rights at the international level depend on the strength and example of their own systems.

Although US democracy was ailing for years before the events of January 2021, the coup attempt continues to send shockwaves through the American political system. The actual assault on the Capitol was the result of a months-long effort by former president Donald Trump and his allies to cast doubt on Joe Biden’s victory in the 2020 presidential election with groundless claims about voter fraud. Despite a raft of judicial rulings and audits that refuted those claims, the false narrative is still pervasive.

Under the pretense of “securing” elections against these imagined threats, Trump and his supporters have been laying the groundwork for future balloting to be manipulated or even overturned. Last year, for example, 19 state legislatures passed 34 new laws that limit access to voting in some form, including through stricter voter-identification requirements without protections to ensure eligible voters are able to obtain ID, and curbs on mail-in voting. At least five state legislatures have passed new laws that will be in effect by November and could further destabilize the electoral process; they variously allow for more partisan control over electoral bodies that were traditionally bipartisan or otherwise impartial, devote resources to investigating infrequent and statistically insignificant election-related crimes, and establish criminal penalties for conduct—like accepting private funding to support underfunded election administration activities—that had been essential for running safe and secure elections in the past.

Politicized attempts to protect election integrity could actually weaken it. Independent media reports have raised concerns that factions within the Republican Party are preparing attempts to undermine the 2022 midterms at the precinct level by staffing election offices and polling sites with partisan observers and poll workers who are instructed to “target and potentially overturn votes in Democratic precincts.” These operatives reportedly plan to overwhelm election officials with legal challenges to votes, voters, and voting machines. Many election offices have already been bombarded by unusually large numbers of records requests, complicating their work ahead of election day. Several Republican candidates for governor and secretary of state, offices that have considerable power over election administration and certification, have indicated their willingness to pursue audits that would make election machinery more susceptible to hacking and tampering. And at a broader administrative level, appeals to protect election security have been used as a pretext for actions that would have the opposite effect, as was the case with Louisiana’s withdrawal from the Electronic Registration Information Center (ERIC), a bipartisan tool for sharing voter-registration data across state lines and between government agencies. The data-sharing facilitated by ERIC allows for states to maintain more accurate voter rolls.

In this post-2020 environment, marked by the stolen-election lie and broader mistrust in the institutions of US democracy, election officials and workers have also faced escalating threats of violence. The secretary of state in Colorado, for instance, has received numerous death threats on social media and in public this year, including calls for her to be hung. In August, a Justice Department task force said it had investigated more than 1,000 messages or encounters that election officials reported as hostile or harassing during its first year in operation, leading to multiple state and federal prosecutions. The phenomenon has prompted many local administrators to resign or consider resigning.

Given the recent declines in US democracy and the mainstreaming of political violence, the upcoming elections could serve as a major flashpoint. In its June 2022 National Terrorism Advisory System Bulletin, the Department of Homeland Security warned that the United States was in a “heightened threat environment” that could grow worse with the midterm elections, among other events. The rise of armed protests, particularly at government facilities, coupled with the decentralized nature of the US electoral system, suggests that as in 2020, the facilities that collect and count votes could become targets for intimidation and possible violence.

Restoring and strengthening US democracy

Many lawmakers recognize the urgent need to strengthen US democracy. A bipartisan group of senators and representatives are advancing legislation to reform the Electoral Count Act, which could help protect legitimate presidential election results by raising the threshold for objections to Electoral College vote tallies, among other provisions. This would guard against the use of bad-faith appeals to election security and false claims of fraud to disrupt the certification process. Many additional measures could be taken to bolster democratic institutions, including the closure of gaps in executive and legislative ethics rules and reinforcement of the authority and independence of inspectors general, both of which would improve government accountability and public trust.

More broadly, all those who believe in American democracy, from public officials to ordinary citizens, should dedicate themselves to a unified and holistic effort to repair and strengthen our shared institutions, while constantly working to persuade others that this is a worthy endeavor. Elections themselves can be a powerful engine for democratic renewal, but only if a critical mass of citizens and leaders are willing to prioritize the enduring public good over narrow and ephemeral partisan interests. Protecting the integrity of the 2022 midterms will require the same sort of commitment to democratic norms and institutions that ultimately brought the country back from the brink of disaster two years ago.