As Trump Returns from India, Others in U.S. Must Press Modi on Human Rights in Kashmir

It is critical that a broad and diverse group of powerful actors in the United States not ignore the Indian government’s turn toward authoritarianism. 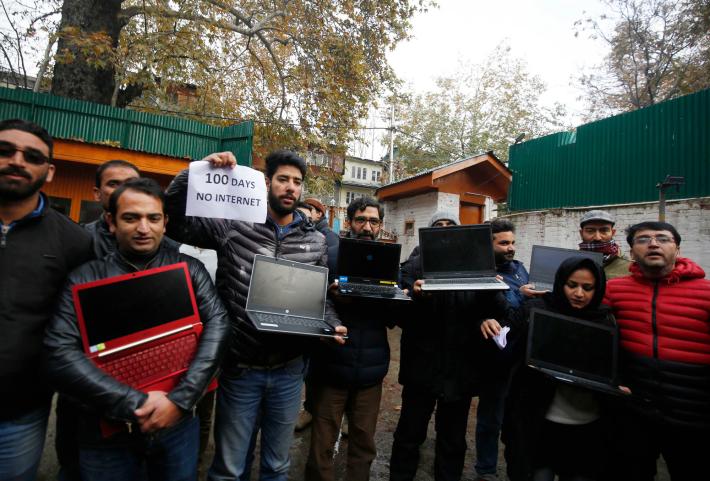 As tens of thousands of Indians cheered U.S. President Donald Trump during a “Namaste Trump” rally in Ahmedabad, Gujarat, last week, Prime Minister Narendra Modi continued his government’s accelerating human rights abuses. Whether it is the crackdown in the country’s only Muslim-majority state Jammu and Kashmir or the discriminatory Citizenship Amendment Law that sparked nationwide protests, Modi’s nearly six years in office have been marred by an increasing nationalist and authoritarian turn.

A U.S. president’s visit to a country where rights are being abused so severely should be an opportunity for public and private remarks expressing America’s policy of respect for human rights and civil liberties. While reports indicate Trump raised religious and internet freedom to Modi in private, there is little suggestion that the conversation significantly challenged the abuses. Indeed, the president publicly praised the nationalist leader as having “worked very hard on religious freedom.”

So as Trump returns to the United States, Congress, civil society, and the private sector should take the lead and push for India to ease its repression and live up to its position as the world’s largest democracy.

The campaign in Kashmir began soon after the Bharatiya Janata Party (BJP) scored its landslide election victory last May, confirming the party’s political dominance and emboldening Modi to take unprecedented, anti-democratic steps in pursuit of his Hindu nationalist agenda. In August 2019, the central government abruptly passed the Jammu and Kashmir Reorganization Act, revoking the state’s special autonomy under the constitution and splitting it into two union territories, which have even fewer powers of self-government than ordinary Indian states. The act effectively stripped millions of Kashmiris of substantial political rights, shifting authority toward centrally appointed officials.

This sudden decision occurred under the cover of a statewide security lockdown, featuring the deployment of tens of thousands of additional troops and a repressive internet blackout. While authorities had previously imposed more than 50 temporary connectivity disruptions in Kashmir, according to the New Delhi–based legal advocacy group SFLC.in, the latest blackout is the longest ever imposed by a democratic government.

The shutdown continued even after India’s Supreme Court ruled in January 2020 that it was an “arbitrary exercise of power,” as the justices failed to order service restoration. Indian-controlled Kashmir remains largely unconnected to date, with only 2G mobile service reportedly available and certain websites accessible.

The blackout has essentially muzzled independent information about the government’s dramatic curtailment of other fundamental freedoms. Authorities have ramped up surveillance, been credibly accused of beatings and torture, and arbitrarily arrested and detained thousands of political leaders, activists, journalists, and ordinary Kashmiris. In some cases, officials have invoked the harsh Public Safety Act, which allows detention without charge or trial for as long as two years.

Modi’s assault on fundamental freedoms has stretched beyond Kashmir. In just one example, the government passed in December the Citizenship Amendment Law that fast-tracks citizenship for non-Muslims fleeing from Muslim-majority Afghanistan, Bangladesh, and Pakistan. Tens of thousands of Indians across religious faiths have since taken to the streets against the law and in support of India’s secular foundation, many of whom have been met with serious police violence.

Indian authorities have maintained that the situation in Kashmir is an “internal matter,” signaling that foreign governments should remain silent. Such silence, however, could normalize these repressive tactics elsewhere in India and in the rest of the world where populist and far-right leaders are increasing pressure on minority populations.

The United States has a moral and a geopolitical interest in checking India’s more repressive policies. Freedom House research has consistently shown that governments learn from one another, copying repressive policies that appear successful in other countries. Modi’s actions in Kashmir could be replicated by other governments looking to tighten control over minority regions.

If the world’s largest democracy can carry out such a sweeping abrogation of basic rights and face little or no pushback from foreign democratic leaders, it is difficult to see why other governments should fear criticism for similar actions. Indeed, Freedom House’s annual Freedom on the Net report chronicles how internet shutdowns are increasingly being normalized as a legitimate policy tool around the world, thanks in large part to India’s record as a global leader in intentional connectivity restrictions.

Washington also has long held up New Delhi’s democratic, pluralist governance model as an alternative to China’s authoritarianism for other Asian countries, and viewed India as a potential ally in its efforts to hold Beijing accountable for regional aggression and systematic human rights abuses. India remaining a strong democracy is crucial to U.S. efforts to challenge China on a number of fronts.

Trump’s visit to India presented an opportunity to challenge New Delhi on its increasingly disturbing human rights record. Yet, the American president has not shown an inclination to do so, and instead has praised Modi as “exceptional,” first at a rally in Houston in September and then in Gujarat in February.

It now falls to other sources of authority in the United States — policymakers, civil society, and social media companies — to demand that Indian authorities change course in Kashmir.

Congress should publicly and privately push the Indian government to restore full internet service, release those who have been arbitrarily arrested or detained, allow an independent review of security forces’ tactics, and hold those responsible to account. Some U.S. lawmakers, including a bipartisan group of senators who in September appealed to Trump on the issue, have already expressed an appetite to challenge India’s behavior. Representative Pramila Jayapal also has sponsored the bipartisan House Resolution 745, although not binding, that urges India to reinstate internet access, release those detained, and preserve religious freedom.

In addition to bipartisan congressional pressure, U.S. nongovernmental organizations should increase their engagement and assist, when possible, Indian civil society groups working to protect internet freedom and human rights. Regional and international civil society networks can conduct research on and strategize diverse advocacy and litigation responses to rights abuses in Kashmir, as well as provide technical assistance in cases of connectivity restrictions, blocked websites, and targeted surveillance. For example, the international #KeepItOn campaign, which unites both U.S. and Indian organizations and is managed by Access Now, has effectively helped raise global awareness of internet shutdowns in Kashmir.

U.S. social media companies also are key players in India — the country is WhatsApp’s largest market, for instance. Such platforms should have robust partnerships with domestic civil society and work to ensure that Modi’s government cannot abuse their products to undermine free expression and privacy.

For starters, U.S. companies should abide by international human rights standards when responding to government censorship requests. In just one example, Twitter withheld accounts sharing news and opinion in Kashmir, according to the Committee to Protect Journalists. Similarly, companies should limit the ability of authorities and local police to conduct blanket social media surveillance and deploy targeted spyware across their platforms.

As U.S. Representative Jayapal’s pending House resolution states, “India’s Constitution mandates a secular state that upholds the rights of all citizens to the freedoms of religion, expression, and speech and to equal treatment before the law.” It is critical that a broad and diverse group of powerful actors in the United States not ignore the Indian government’s turn toward authoritarianism. To do so would only encourage Modi and the BJP to advance Hindu nationalism at any cost, undermining India’s founding principles of secular democracy and further endangering fundamental freedoms in the world at large.

This article was first published by Just Security on February 26, 2020.