Two Wars, One Standard: U.S. and Russian Bombs in the Middle East

As it rightly presses Russia to halt the bombing of civilian targets in Syria, the United States is supporting an abusive air campaign by a Saudi-led coalition in Yemen.

As it rightly presses Russia to halt the bombing of civilian targets in Syria, the United States is supporting an abusive air campaign by a Saudi-led coalition in Yemen.

For months, the United States has joined the United Nations and others in criticizing Russian bombing in Syria for its unacceptably high toll on civilian life and infrastructure. Secretary of State John Kerry recently reiterated American displeasure with the humanitarian impact of Moscow’s actions, accusing Russian forces of bombing indiscriminately.

It is of course true that both the air campaign and other forms of Russian support for the regime of Syrian president Bashar al-Assad have protracted the conflict and increased its already devastating effects on the Syrian people. Unfortunately, the United States is exposing itself to claims of a double standard by facilitating similar abuses in another Middle Eastern war zone: Yemen.

Landmines from the sky

At the beginning of February, Human Rights Watch released a report detailing one of the more chilling dimensions of Russia’s bombing campaign in Syria: the use of cluster munitions. These weapons consist of a large munition that releases a number of smaller “submunitions”—bomblets designed to scatter and explode separately, either in the air or when they fall to the earth. However, the submunitions often fail to explode when they reach the ground. Instead they can be detonated if disturbed later by people in the area, essentially acting as a type of landmine.

Because of the threat the weapons pose to civilians living in conflict areas, nearly 100 countries have ratified the 2008 Convention on Cluster Munitions, which prohibits their use, manufacture, sale, or transfer by any country that is a party to the convention, and mandates the dismantling of existing stockpiles. 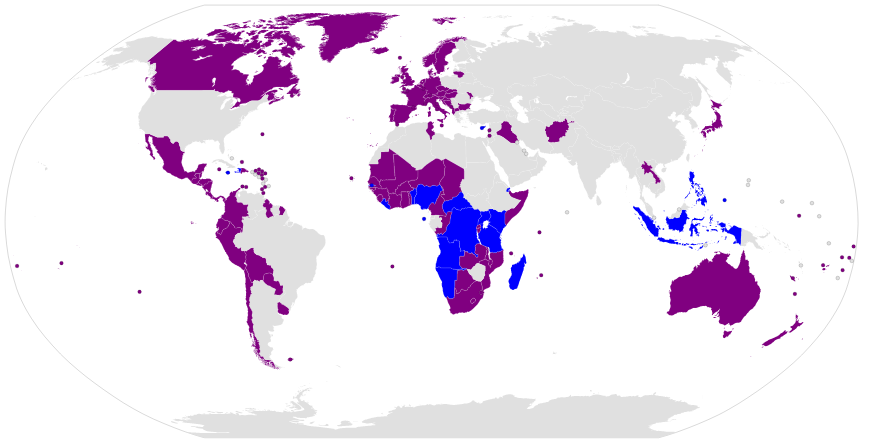 The above map illustrates Signatories to the Convention (blue) and States Parties (purple). Wikimedia Commons.

Russia is not a state party to the convention and has been using cluster munitions in Syria since the beginning of its air campaign last year. This is a grave development that merits vigorous international condemnation. But the United States has compromised its credibility on the issue through its conduct elsewhere in the region.

The United States, like Russia, has neither signed nor ratified the Convention on Cluster Munitions. It not only manufactures the weapons for its own use, but exports them to countries with dismal human rights records that have deployed them on the battlefield.

Beginning in March 2015, a coalition of Arab countries led by Saudi Arabia began a military campaign in Yemen to reverse the advances of the Houthis, a Shiite rebel group from the country’s northwest that had seized large swaths of territory and displaced the Saudi-backed government of President Abd Rabu Mansour Hadi. From the early days of the campaign, the coalition deployed American-made cluster munitions, predictably causing dozens of civilian deaths and injuries.

The problem has continued in 2016, with Human Rights Watch documenting the use of the weapons in populated areas and the failure of submunitions to explode immediately, creating the landmine effect for which they are notorious. Both of these facts suggest that the export of cluster munitions to countries such as Saudi Arabia, which received shipments as recently as last year, violates U.S. laws requiring the transferred weapons to have extremely low failure rates and prohibiting recipient countries from using them in civilian areas.

The provision of cluster bombs is not the only way in which the United States has supported the Saudi-led coalition in Yemen. American tanker planes have refueled Saudi aircraft on hundreds of occasions. U.S. military advisers based in Saudi Arabia have helped to plan and coordinate air strikes. And the warplanes themselves are almost all American-made. Some 3,000 Yemeni civilians have been killed in the conflict, and the United Nations has determined that the Saudi-led coalition has deliberately targeted civilian population centers, describing its actions as potential crimes against humanity. As in Syria, medical facilities have been attacked repeatedly, and a coalition naval blockade has contributed to a massive food crisis, echoing the starvation seen in besieged Syrian towns.

Russia’s actions in Syria are clearly reprehensible, and the United States should continue to press Moscow to observe international norms. But Washington would be a far more effective advocate if it adhered more consistently to the same high standards. To address the specific issues raised here, the United States should sign and ratify the Convention on Cluster Munitions, end military aid to authoritarian states that engage in serious human rights abuses, and step up efforts to ensure that all of its allies respect international law on conflict and the protection of civilians.

Matthew Thomas is a former research assistant for Freedom in the World and Freedom of the Press.