The world must support democracy's defenders in Ukraine and the surrounding region with solidarity and patience. 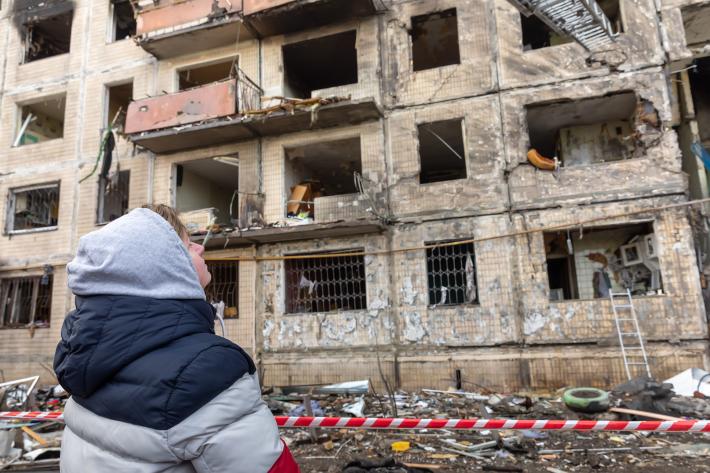 One of the great privileges of being president of Freedom House is the opportunity to meet front-line activists who are working to advance the cause of human rights and democracy, often in unimaginably difficult conditions.

Last week, I visited Warsaw, Poland, and Vilnius, Lithuania, to hear directly from those defending freedom in three countries that currently stand at the epicenter of our shared global struggle—Russia, Belarus, and Ukraine. I also met esteemed Freedom House colleagues who provide support to activists in each of these countries, as well as government officials and others with first-hand perspectives on the war in Ukraine.

As grave as the situation seems to be, I came away from these conversations with a feeling of hope for the future of democracy in this pivotal region of the world.

I met with Sasha Pushkina of Zerkalo.io, who is working with journalists on the ground to provide accurate, uncensored news for the people of Belarus, despite a brutal crackdown by the regime of Alyaksandr Lukashenka that has jailed more than 1,200 dissidents, including members of her own news organization.

Aliona Luniova of the Zmina Human Rights Centre traveled from Kyiv to meet with Freedom House representatives in Warsaw and report on the robust effort by a variety of groups to document nearly 15,000 cases of apparent war crimes by invading Russian troops. At another meeting in Warsaw, leaders of Ukraine’s LGBT+ community told me that KyivPride and its Polish counterparts are still planning to march this year, with an emphasis on peace and freedom in Ukraine and opposition to Russian aggression.

While in Poland, I spoke with the country’s deputy commissioner for human rights, Hanna Machińska, about combating discrimination against Ukrainian refugees. As of the end of May, more than 3.5 million people have fled from Ukraine to Poland, and more than 160,000 Ukrainian children have already been enrolled in the Polish secondary education system—garnering incredible support from the Polish people.

Crucially, I also heard from several Russian activists and journalists that dissent has not been wiped out in Russia despite intensifying internal repression by Vladimir Putin’s regime, which has jailed 15,000 people for antiwar protests, labeled dozens of groups as “foreign agents,” and prompted some 300,000 Russians to flee the country since the unprovoked invasion of Ukraine began at the end of February. Russian anticorruption campaigners and independent journalists are still finding ways to circumvent the authorities’ efforts to keep anything but Kremlin propaganda from reaching Russian citizens.

Grigory Okhotin, a Russian human rights activist, told me that the expanding crackdown is actually eroding support for Putin and his regime. “People never care about something abstract,” he said. “Human rights can’t develop without violations of human rights.”

Of course, as Grigory stressed, the revolution is not coming tomorrow. The fight for freedom is a generational struggle, and few of the people I spoke with last week were predicting a quick end to the war in Ukraine or the authoritarian regimes in Moscow and Minsk. One strong theme that emerged from my conversations was the need for both solidarity and patience from those of us living in democracies: we must not act prematurely by easing sanctions and other forms of pressure on these regimes without significant changes in behavior.

Government officials in Lithuania made clear that they know from experience what it means to live under totalitarian rule—and that they will do anything in their power to prevent its return. Gabrielius Landsbergis, Lithuania’s foreign minister, said he is deeply worried that the world’s democracies will tire of a stalemate in Ukraine and move too quickly to reintegrate Russia—“a regime that commits genocidal crimes”—into the international community.

“There’s an intrinsic desire to get back to business as usual,” he told me, warning that it must be resisted until Russian forces withdraw from Ukraine.

I fear that his concerns are valid. It is exhausting to maintain the appropriate level of outrage at Putin’s actions and compassion for those lost, displaced, and suffering. But my week in the region was a powerful reminder of the need to reject complacency in the ongoing struggle for a freer and more democratic world. In their steadfast refusal to accept Russian domination, the people of Ukraine are showing the world what it means to fight for democracy. And through their tenacity in the face of overwhelming cruelty and coercion, Russian and Belarusian activists are demonstrating the mettle that will be required of us all if we are to reverse 16 years of global democratic decline and authoritarian expansion.

I hope the citizens of democracies around the world are paying close attention.