Is Ukraine Turning the Corner on LGBT Rights?

A successful Pride event in Kyiv shows how far Ukraine has come. But for those who cause violence, impunity remains. 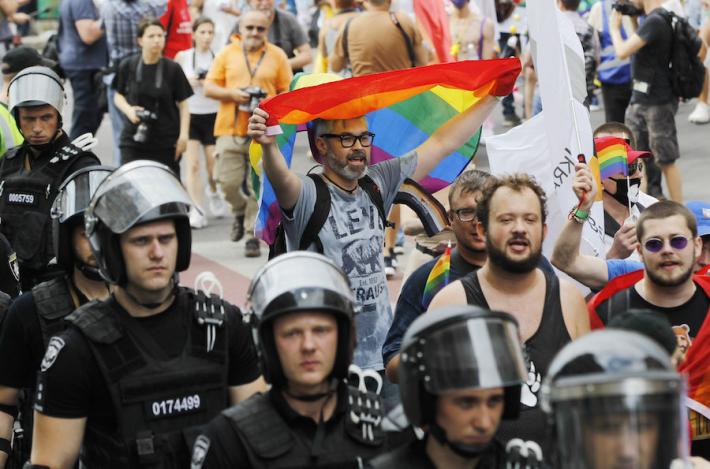 A successful Pride event in Kyiv shows how far Ukraine has come. But for those who cause violence, impunity remains.

The organizers of Kyiv Pride, Ukraine’s biggest LGBT+ rights event, stood on the roof of a building in a slick video and asked the country’s new president: “Will you be the first Ukrainian president to join the Equality March and support human rights?” While President Volodymyr Zelenskyy did not join the event on 23 June, thousands of others from all walks of society did, many demonstrating that patriotism and LGBT+ rights are complementary values. What’s more, several cultural and political leaders spoke out in support of LGBT+ rights, rejecting violence for the first time—a sign that support for LGBT+ rights in Ukraine is at a turning point.

President Zelenskyy ended up issuing a statement on the day of the Equality March, calling for law enforcement to guarantee the security of everyone during the event. The president’s statement, likely muted in the heat of a campaign to win a parliamentary majority on 21 July, was still a major improvement on the previous president’s one and only public comment on Pride in 2015. Zelenskyy’s statement was preceded by an even stronger one from the Kyiv city government, which pledged support for tolerance and called a safe Equality March “an opportunity to demonstrate that Kyiv is a true European capital.” Prominent cultural personalities, such as singer and musician Pianoboy, as well as actress Olha Sumska, also spoke out in support of Kyiv Pride this year.

At least 6,800 people participated in the Equality March, around double last year’s turnout. Participants were young and old, queer and straight, Ukrainian and foreign, all blissfully expressing their support for LGBT+ rights and chanting slogans such as “Our tradition is freedom!” and “Rebel, love, and don’t give up your rights!” The feeling was electric, and in many ways the protest and slogans evoked both the elation and the defiance of the 2014 Revolution of Dignity protests which toppled then president Viktor Yanukovych.

In addition to the big turnout and high-profile political support, the march was bolstered by LGBT+ veterans and soldiers—who marched for the first time as a group—with the message that LGBT+ people are among those fighting against separatists and Russian forces in Ukraine’s east. The Equality March this year was also joined by a large group of trans rights activists, including a large trans flag, in a first for a country where trans people are nearly invisible. Throughout the march a rainbow Pride flag soared above the marchers attached to a drone (“Pride in the Air”), elating participants and enraging counterprotesters who plotted to shoot it down.

In the days before the Equality March, it was not clear how many people would participate and if the event would be marred by violence. Opponents of LGBT+ rights repeatedly threatened violence against the Equality March and Pride Week events. Following a film screening at the Pride House, several young people were pursued or attacked with pepper spray and beatings by opponents of LGBT+ rights. At a press conference in front of President Zelenskyy’s office, Kyiv Pride organizers criticized the president’s silence in response to the spate of attacks.

Unfortunately, anti-LGBT+ violence continues to be a major problem in Ukraine—due in large part to the fact that perpetrators almost always get away with it. In 2018, there were at least 93 violent anti-LGBT+ attacks in Ukraine. While recent Equality Marches in Kyiv have been protected from violent opponents by throngs of law enforcement officers, this hasn’t always been the case, and still isn’t, for many public LGBT+ rights events.

Nearly all of the 25 people detained for hurling explosives at participants in the 2015 Equality March in Kyiv, which injured many participants and police officers, were released without charges. Only four people, who openly admitted their anti-LGBT+ hate motivation, were eventually convicted of simple hooliganism, though the judge reduced their sentence from three years’ imprisonment to two years’ probation. No one has been held accountable for a violent assault on an event organized by Amnesty International Ukraine in May 2018, despite the group’s efforts to basically do investigators’ job for them by providing them with extensive evidence. The LGBT+ rights group Nash Mir has documented these and dozens of other incidents in the past few years, almost all taking place without any consequences.

In a disappointing development for counterprotesters this year, only around 300 showed up to oppose the thousands who came to march for equality. They threw eggs at Equality March participants, tried to break through the police protection, tore down LGBT+ rights signs, and, in a bizarre twist, robbed portable toilets of fecal matter in order to throw it at Equality March participants. Fortunately, their efforts to disrupt the march, including their gruesome fecal plot, was thwarted by thousands of police, National Guard, and other law enforcement forces.

The thousands who came to participate in the Equality March, especially when compared to the sorry band of opponents, and the growing support from political and cultural leaders, veterans, and many others, suggest that major change is under way in Ukraine. Not only are politicians being more vocal about supporting the human rights of everyone, including LGBT+ people, but regular people are increasingly coming out to express their convictions in spite of threats. Ukraine has a long way to go towards accepting everyone for who they are, yet this year’s Kyiv Pride shows that the movement for equality is gaining momentum and that Ukraine’s democracy is growing more inclusive and diverse.

Next year, with parliamentary elections behind us, we can expect more support for Kyiv Pride from political leaders, and hopefully President Zelenskyy’s timid statement will be the new low bar. There will also likely be many thousands more participants as Ukrainians increasingly realize that the dignity they fought for on Maidan is the same one that LGBT+ Ukrainians are also fighting for.

This article was first published by openDemocracy on July 2, 2019.