Ukraine’s Fight for Freedom: “We Will Recover, We Will Survive”

Ukrainian diplomat Emine Dzhaparova, recipient of the 2022 Palmer Prize, told a Freedom House panel that her country would achieve both victory and democracy. 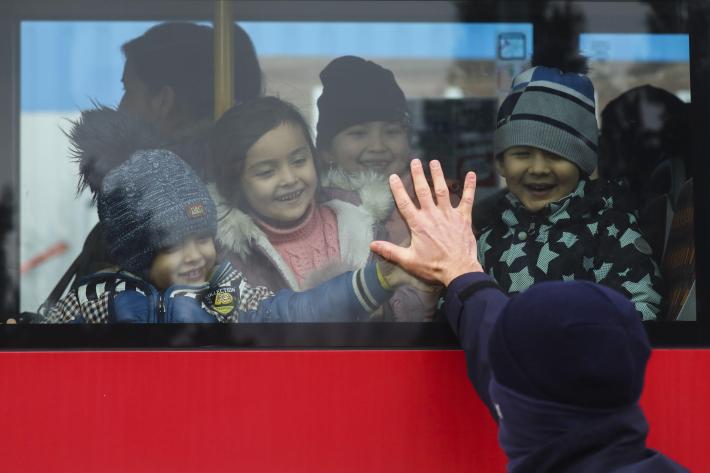 On December 6, Freedom House awarded the 2022 Mark Palmer Prize to Emine Dzhaparova, Ukraine’s first deputy minister for foreign affairs, for her work on behalf of the Ukrainian people, especially Crimean Tatars, and her leadership in the struggle against Moscow’s aggression.

Michael J. Abramowitz: Please give us a quick assessment of the state of the war in Ukraine and what lessons we have learned over the past year.

Karen Donfried: I am truly inspired by the Ukrainian people and their incredible bravery and resilience in the face of a brutal Russian attack. What is at the root of this battle are the values that we believe in and the values that Freedom House as an organization embodies. We are fighting for democracy, human rights, and the right of a country to decide the sort of foreign and security policy it wants to have. We want to live in a world ordered around rules accepted and embodied in the UN charter. There are so many things that are at stake. I can say that the Biden administration is deeply committed to supporting Ukraine and standing with Ukraine until this war is over. And this war will be over when Ukraine wins.

Francis Fukuyama: This war has always been about much more than just Ukraine. It … is part of a longer-term campaign by Putin to upset the entire post-1991 European order that liberated many countries from Soviet tutelage. What Ukraine has done is show people in the West that their security cannot be taken for granted and that democracy is something worth fighting and dying for.

Abramowitz: Minister Dzhaparova, can you share a few words on your assessment of the situation over the last 10 months and what you think the audience should know?

Emine Dzhaparova: First, Ukraine is a strong nation. Second, we destroyed this myth that Russia is the second-biggest army in the world. We have always lived with the fear that Russia is a superpower. When it came to Crimea, the discussion always reflected that Russia would fight for it and use their nuclear weaponry. Even with this myth, Ukraine has kept fighting and resisting. Third, we have proved nothing is impossible if there is a united effort. We couldn’t believe that Russia would be expelled from the Council of Europe, or that they would also be removed from the Council of Human Rights.

Dzhaparova: The human rights situation has worsened since the invasion. There is a change of the demographics landscape; Russia brought in at least 800,000 Russian citizens, trying to shape a loyal population—even though there are still many loyal Ukrainians left, including myself. When Russia announced the conscription to the Russian army, they disproportionately enlisted Crimean Tatars. Throughout this, Russia occupied Ukrainian media [in order to] broadcast Russian regional media. We should keep up information campaigns against Russian propaganda. The final goal is to ban Russian media.

Donfried: Fundamentally the war in Ukraine is about the kind of world we want to live in. Are Americans okay with a bigger, stronger country invading its weaker neighbor and taking its territory? I do not think that is the world most Americans want to live in. We want to live in a world where people have the freedom to make choices about the kind of country they want to live in and the foreign and security policy that country pursues. Do they have individual rights? Do they have a free press? We have come to take these for granted, but it reminds us that there are fundamental principles and values worth fighting for. That’s what the Ukrainians are doing, and we as Americans are doing everything we can support them in that fight.

Abramowitz: You’ve been quite bullish for months in saying that Ukraine is going to win the war. Very shortly after the war started, you [Fukuyama] were writing that Russia was going to lose and Ukraine was going to win, that it was just a matter of time. Tell us why you believe that.

I started my career as an analyst of Soviet military affairs, and it struck me [at the time] that the Russians were particularly bad at military logistics. Right now, the Russian position on the left bank of the Dnipro River is not all that strong. Ukraine needs to take that area back and break that land corridor between Russia and Crimea, which could be a prelude to Ukraine retaking Crimea itself. And at the beginning of the war, the idea that this war could actually lead to the liberation of the Crimean Peninsula was something that in our wildest imaginations we didn’t envision.

Abramowitz: Minister, do you have any final words for our audience?

Dzhaparova: Let me express my sincerest gratitude for today’s event and prize. I take it not only personally, but on behalf of my people who are resisting and demonstrating bravely every day. Every second while we are talking, our soldiers are fighting on the battlefield. We know that every war comes to an end. We all fight so that this end comes as soon as possible. We will recover, we will survive, revive, and arrive to the country that we are dreaming of, which is a prosperous, European, democratic country. I believe that we can do it with your help, and I’m very thankful for it.