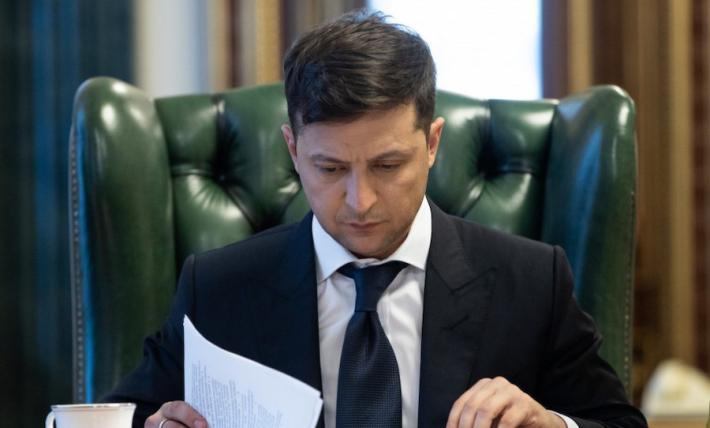 On June 6, the Constitutional Court of Ukraine struck down the e-declarations law, a burdensome and intrusive requirement that had, for the last two years, forced civic anticorruption organizations to submit public income and asset declarations or risk serious financial and legal consequences. This decision, which came after two years of dogged advocacy efforts against the law by civil society and the international community, represents a step in the right direction for freedom and democracy in the country.

The question is whether it will form part of a larger pattern of progress under the new administration of President Volodymyr Zelenskyy and help revitalize Ukraine’s democratic commitments. Zelenskyy won the presidency in an April 21 runoff election with 73 percent of the vote against incumbent Petro Poroshenko, completing what were deemed to be among the most free and fair elections in the country’s history. But it remains unclear how the young leader, a former comedian with virtually no political experience, will fulfill his promises to tackle long-standing challenges including the conflict in Donbas and reform of the Security Service of Ukraine (SBU).

On his inauguration day, Zelenskyy called for snap parliamentary elections, which were approved by the Constitutional Court and will take place on July 21. To maintain the positive momentum from the court’s remarkable decision on e-declarations, the president and the incoming parliament should focus on three key priorities: Expanding the space for civil society to engage openly with lawmakers, fostering a safe environment for the media and free expression, and combating impunity for violence by far-right groups and others.

Civil society remains one of the strongest pillars of Ukraine’s burgeoning democracy. Civic activists have formed vibrant, effective coalitions to secure structural changes in areas such as judicial reform, electoral reform, and decentralization.

Over the last two years, however, government enthusiasm for civil society engagement on legislation waned significantly. In many cases, the authorities under former president Poroshenko’s leadership did not pass or otherwise ignored reforms and draft laws advocated by civil society groups. In fact, in a 2018 interview, the former deputy head of the presidential administration, Dmytro Shymkiv, said the parliament had adopted the e-declaration rules as payback against activists who had pushed through requirements for public disclosure of politicians’ and other government officials’ assets.

Activists who work on human rights, anticorruption, and public interest issues face a variety of other obstacles, including restrictive legislation, harassment by individuals allegedly linked to the SBU, physical intimidation and violence, and smear campaigns. Vitaliy Shabunin, executive director of the Anti-Corruption Action Center (ANTAC), faced criminal charges last year after punching blogger Vsevolod Filimonenko, who was reportedly sent by the SBU to harass ANTAC staff in retaliation for their outspoken criticism of Poroshenko. In another case, unknown assailants armed with Molotov cocktails set fire to the apartments and offices of several local anticorruption and environmental activists in Rivne in February 2018.

In many respects, Ukraine’s news media are far ahead of their counterparts in the region, including those in Belarus, Kyrgyzstan, Kazakhstan, and Russia. According to Freedom House’s 2019 Freedom in the World report on Ukraine, the press features considerable pluralism and open criticism of the government. Nonetheless, Ukrainian media face major threats to their independence—particularly political and oligarchic control over most of the country’s national television channels—that result in biased reporting and paid content disguised as news (jeansa). According to the Institute of Mass Information (IMI), a local watchdog group, jeansa in online media increased by 22 percent ahead of the upcoming July 21 parliamentary elections compared with a similar period before the presidential vote earlier this year. Among the worst offenders were Channel 112, Inter, and NewsOne, which are affiliated with the Opposition Bloc.

Many journalists, however, have been taking a strong stand against political control of the media. On July 4, over 400 journalists resigned from ZIK TV and its sister news agency after Opposition Bloc politician Taras Kozak acquired both holdings last month. Kozak, who has deep ties with pro-Russian oligarch Viktor Medvedchuk, has already rolled out new policies to suppress criticism of Medvedchuk and created a “stop list” of individuals who are banned from appearing on ZIK programs. Critics accused Kozak of attempting to disseminate “pro-Kremlin propaganda” in Ukraine’s media space.

Such an exodus from a national television station is unprecedented. The journalists who quit issued a statement, together with a broad coalition of other Ukrainian activists and media watchdogs, demanding that President Zelenskyy ensure the editorial independence of Ukrainian media. Many remain concerned about the fate of Ukraine’s independent public broadcaster, Suspilne.

Journalists frequently face verbal and physical harassment. Since the beginning of 2019, IMI has documented 72 incidents of physical aggression against journalists. For example, Cherkasy-based journalist and blogger Vadim Komarov, known as a tough professional who exposed corruption and reported on public interest issues, passed away after sustaining serious injuries in an attack on May 4. The police opened an investigation amid evidence that the attack was motivated by Komarov’s work and what politicians deemed to be his “inconvenient questions.” However, no suspects have been charged to date. In another egregious case, reporter Pavlo Sheremet was murdered in 2016, apparently in retaliation for his hard-hitting journalism. The night before his murder, security-camera footage captured two unidentified assassins planting explosives under his car with a former SBU agent in the background. Sheremet’s case remains open and unsolved.

One of the most acute challenges that Ukraine’s new leadership must tackle is politically motivated violence, which has grown significantly worse over the last two years. In 2018, there were at least 55 violent attacks documented against civil society actors throughout the country. Thirty-nine have already been recorded this year. Some of the most emblematic cases are those of Kateryna Handzyuk, who died in November 2018 as a result of injuries sustained in an acid attack, and Mykola Bychko, an environmental activist from Kharkiv who died in June 2018 under mysterious circumstances. While civil society and human rights activists are often the victims of these crimes, journalists, lawyers such as Ludmila Nozdrovska, and political figures are also targeted frequently. Activists from marginalized groups—including the Roma, LGBT+, and feminist communities—face a disproportionate number of attacks.

The main perpetrators of the violence are right-wing extremists and criminals, groups which frequently collude with the authorities and corrupt forces within the law enforcement establishment to silence activists. As Tetiana Pechonchyk from ZMINA Human Rights Center notes, “law enforcement bodies often merge and form ‘conglomerates’ with the authorities, dishonest business owners, and local bullies and criminal elements.” The authorities’ responses to these sorts of attacks are halfhearted, if they respond at all, creating an environment of near-total impunity. The SBU in particular has for years proven impenetrable to reform and presented a challenge to democratizing political leaders.

In this rather bleak landscape, the Coalition to Protect Civil Society, a group of over 50 nongovernmental organizations in Ukraine that work in defense of freedom of association, has enjoyed some remarkable successes in the last year. Under significant pressure from civil society following the attacks against Handzyuk and five other activists, for example, the parliament established a Temporary Investigative Commission to scrutinize the government’s response to the trend of attacks, and its mandate was subsequently extended.

Recommendations for the new administration

While the Ukrainian government has made some progress on the human rights problems that stymie the country’s democratic development, the change in executive and legislative leadership that will be completed after the July 21 elections presents a critical opportunity for further advances. For its part, civil society is ready to engage. By addressing the following issues, the new administration can demonstrate its good-faith commitment to improving human rights and overall freedom in Ukraine.